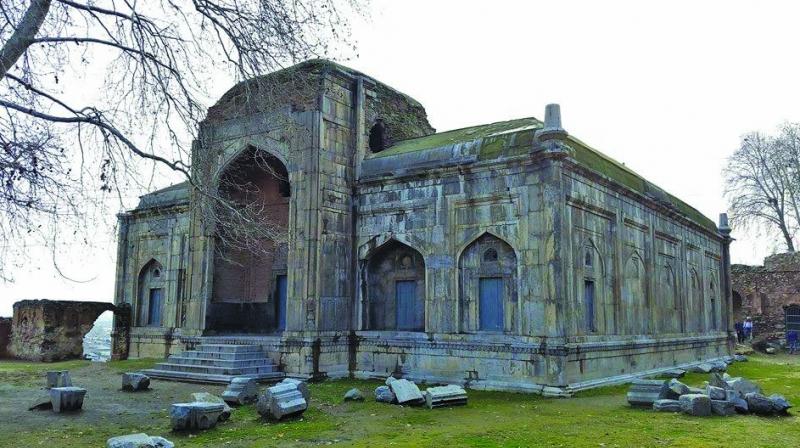 Akhund Mullah mosque on the foothills of Hari Parbat falls prey to neglect by the ASI.

Srinagar: Many of 50-plus archaeological sites across Kashmir Valley are in dilapidated condition after these were abandoned by the Archaeological Survey of India (ASI) when insurgency started more than 27 years ago.

The ASI’s Srinagar circle headquarters was shifted to Jammu, and have not returned to its original place since.

Ironically, the Centrally-protected monuments in the Valley have been left unattended and, with no renovation or repair taking place at most of these as is required under the relevant provisions of the law for so long, many of these sites are crumbling.

Take for instance Akhund Mullah mosque on the foothills of Hari Parbat or Koh-e-Maran built by Mughal prince Dara Shikoh for honouring his tutor Mullah Akhund Shah in A.D. 1649.

The mosque built of grey limestone and it lotus over the pulpit being the only example of its kind surviving in Kashmir is in shambles. But since it is a Centrally-protected monument under the ASI, no repair or renovation work can take place through individual or community initiative.

“It is the ASI which under the provisions of the relevant law has to do it and salvage it from being ruined completely,” said Khalid Bashir Ahmed, a former government official.

The other historical monuments and sites which are decaying due to neglect include the ancient site and remains at Burzahom near Srinagar, which reveals a three-fold cultural sequence, starting from the Neolithic period and succeeded by Megalithic and early historical cultures, and another one at Chakradhar, Semthan.

The Srinagar circle of the ASI is operating from Gandhi Nagar in Jammu and is being headed by a superintending archaeologist. Sources in the J&K government said that the SA along with his entire staff, except the conservation assistant, a very junior-level employee, migrated to Jammu more than 25 years ago, leaving the Centrally-protected monuments in the Valley unattended.

“The persistent requests and decisions taken to shift the circle headquarters back to Srinagar are not heeded to,” one of them said.

However, the ASI officials claim that the 56 Centrally-protected monuments under its Srinagar circle “are being looked after well” — from Jammu, which is some 300 km away.