Urdu festival Jashn-e-Rekhta resonates with one and all 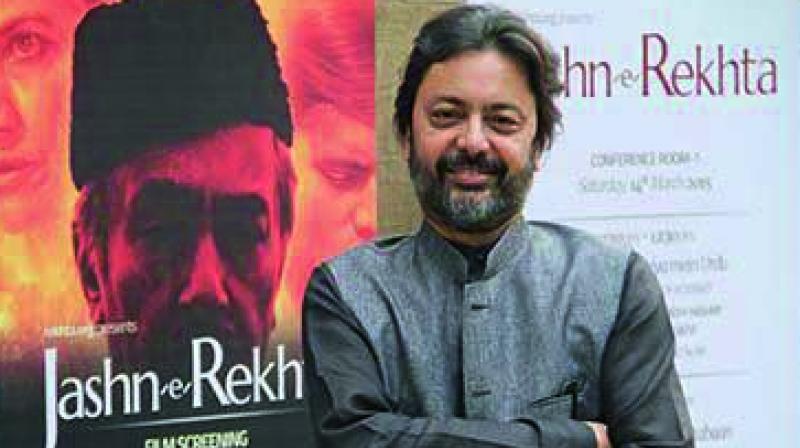 Urdu, of late, considered as a redundant language, almost on oxygen, has been revived and rejuvenated by the soft spoken and self-effacing Sanjiv Saraf through Rekhta, a foundation for the uplift of Urdu. Recently, IGNCA was abuzz with connoisseurs of Urdu, mostly non-Urdu knowing youth at the three-day Jashn-e-Rekhta Urdu festival. He shared his concern for the language of sher-o-shayari with Firoz Bakht Ahmed.

Though an IIT engineer from Kharagpur, what implored you to get deeply involved with Urdu?

With due regard to all the languages, no other language can match the exuberance and sweetness and splendour of Urdu that I consider to be the language of love, romance, sophistication and culture. Let me concede that Delhi’s tehzeeb (culture) is Urdu tehzeeb. I had desired to serve the language since my youth as my father knew it. However, Urdu is not merely sher-o-shayari, ghazal, qawwali, masnawi and marsiah (different genres of Urdu poetry). It’s the epitome of our Ganga-Jamuni tehzeeb (India’s composite culture). Urdu is a language born out of our syncretism accruing from the commonality of cultures.

Though Urdu festivals have been conducted all over the world, however, what is the mystery behind the immense response that your festival has?

First, it is not mine but belongs to all Urdu connoisseurs. Even I am amazed at that. Well, it is basically owing to the appeal of Urdu with its attractive countenance, the melody of its voice, the rhythmic flow of its stanzas, the sheer fascination of its thoughts, the extravagance of its communication, the unrivalled sugary metrics of its poetry, and the cordiality of its cradle that people of all ages from all cross sections of society and religions are its connoisseurs. We’ve just added flair to it. For this enormous response, I give full credit to the well-cemented interfaith bonds among Indians. Besides, I am thankful to my team of around 70.

What is your reaction on masses hardly knowing you as an industrialist of Polyplex Limited, dealing in polyethylene terephthalate films but through Rekhta, becoming a celebrity?

Frankly speaking, it is something really incredible as I had never done it with the intent of hogging the limelight. However, as my father loved Urdu, I inherited it from him and honestly wanted to do something for the language of love that was on the wane. Right from my childhood, I used to be in awe of the Urdu language, primarily due to its unmatched expressiveness and diction. I learnt Urdu and wanted to make the language accessible to more people in my country. Well, having contributed my bit to it, I do feel on cloud nine today. However let’s not forget Urdu servers, like Kamna Prasad of Jashn-e-Bahar and Madhav B. Shriram of Shankar-Shad Indo-Pak Mushaira who too, as selfless Urdu lovers, are trying to uplift the language.

You have pooled in a lot of resources into Rekhta festival but what’s the return?

Look, my passion for Urdu is not driven by the critics’ general concerns, like, Urdu’s disconnect with market and jobs and Urdu being a language of Muslims, etc., as in my view languages have no religion. If you are passionate about anything, you don’t look into the monetary or marketing aspect as it is in your heart. A revival of Urdu is vital for the renewal of the Indian national and social ethos. Urdu’s revitalisation will show the survival of our strongly cemented interfaith bonds. My earning might not be in currency but the huge sea of humanity I’ve managed to for Urdu in all the three festivals.

What exactly is Rekhta contributing for the cause of Urdu besides, a gala fete at the Indira Gandhi National Centre for Arts lawns?

These days, the rise of Urdu’s popularity among masses, specially the youth, is owing to its easy online availability in Devanagari and Roman scripts on our Rekhta and aamozish websites. In Rekhta’s e-book section, a huge collection of rare books nearing 25,000 manuscripts, and other literary material and publications. College students are learning Urdu passionately. Celebrated Urdu poets and litterateurs reciting their poetry and discussions have been preserved on audio and video. Till now 40,000 ghazals and nazms, thousands of poets have been included in Rekhta. Its watchword is quality.

Apart from sher-o-shayari, what are the other attractions of Urdu in Jashn-e-Rekhta?

Urdu activities including the mushaira (poetic congregation), dastangoi (story-telling), nukkad natak (play), critical appreciation, qawwali (musical saga), ghazal sarai (recitation of Urdu poetry), baitbaazi (poetic puzzling) and nashist (literary discussions), have carved a niche for the followers of Urdu who have been gracing this festival from each nook and cranny of the country and abroad as well.

By the way, how was the marketing at various stalls?

You will not believe that anything associated with Urdu in the subcontinent will sell like hot cakes if planned and showcased with panache. All the food stalls throughout the three days earned a huge profit and the serpentine lines at the token counters proved this. Besides, counters like Ishq Urdu, ArtyKite did rollicking business just selling their stylish Urdu posters, medallions, attars, books and umpteen other creations. We take into account even children’s interest by arranging face painting, origami, puppet show, painting and tattooing. I am certain Urdu will live and live long!

(Firoz Bakht Ahmed is a commentator on social, educational and religious issues and is the grandnephew of Maulana Abul Kalam Azad)