Modi, who is on a two-day visit to Gujarat, launched the intensified Mission Indradhanush that will work towards full immunisation. 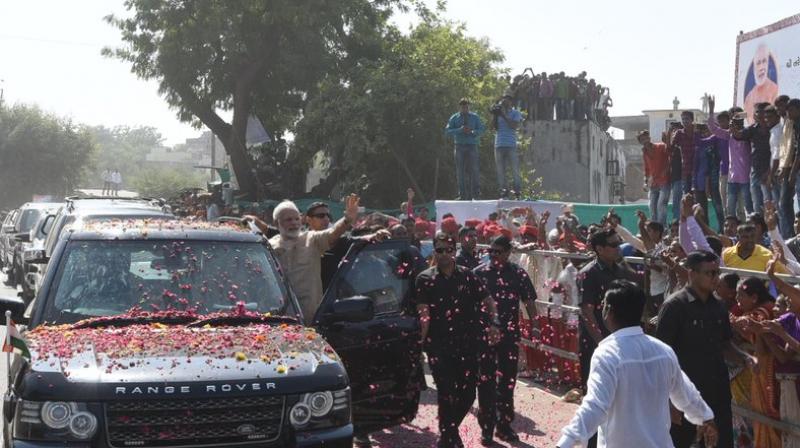 The entire city was decorated for the grand welcome of the Prime Minister. (Photo: PMO India/Twitter)

Vadnagar (Gujarat): Prime Minister Narendra Modi, who was in his hometown Vadnagar, Gujarat, on Sunday, said that the Government is constantly working on making healthcare affordable for the poor.

"We brought prices of stents down. Work is constantly being done to make healthcare affordable for the poor," said Modi, who received a grand welcome at his birthplace in Mehsana district.

"Coming back to my hometown and receiving such a warm welcome is special. What I am today is because of the values imparted in me. I will work even harder for the nation," he said.

Modi, who is on a two-day visit to Gujarat, launched the intensified Mission Indradhanush that will work towards full immunisation.

"I am happy that I got a chance to inaugurate projects relating to the health sector, particularly Intensified Mission Indradhanush," he said.

Taking a jibe at the Congress, he said, "The Atal Bihari Vajpayee government had made health policy during its tenure, but the next government neglected the sector."

Modi, after becoming Prime Minister in 2014 visited his hometown for the first time.

The entire city was decorated for the grand welcome of the Prime Minister.

There were chants of "Modi-Modi" and flowers were showered on him at several places along the route of the roadshow.

A large number of Vadnagar’s residents queued up along the route to greet Modi.

"We as a society require more doctors who can serve people," he said and dedicated the institution to the nation.