As the Haryana government agreed to the demands of these girls, little did it realise that it was opening a Pandora’s box for itself. 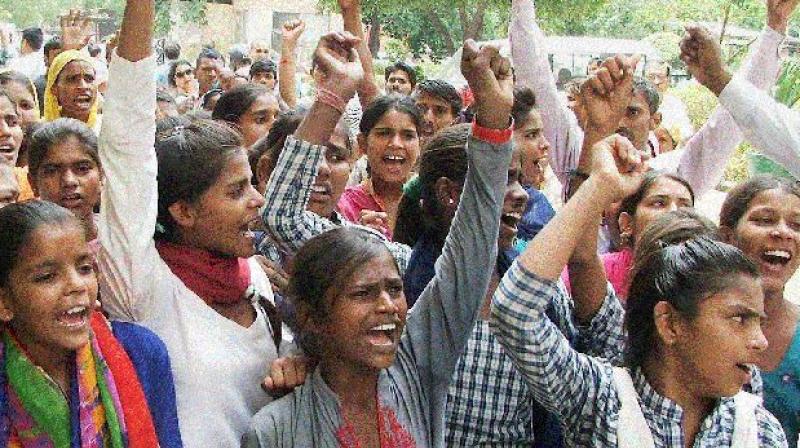 Girl students protest over their demand for upgradation of the secondary school at Mujedi village in Faridabad. (Photo: PTI )

Chandigarh: The Haryana government recently upgraded a government high school for girls at Gothda Tappa Dhania village in Rewari district, after schoolgirls went on a hungerstrike demanding that the school in their village be upgraded since they face eve-teasers on their way to their current school, which is in another village three kilometres away.

As the Haryana government agreed to the demands of these girls, little did it realise that it was opening a Pandora’s box for itself.

Stumped by this sudden spurt in demands of school upgrades, all of which were not practically possible for the state to accept, the state education department has come up with an idea to form “Balika suraksha committees” (girl safety committees) in every girls school in the state to deal with problems such as eve-teasing. According to the education department’s additional chief secretary P.K. Dass, these committees will work in tandem with panchyats and educate them about ways to avoid incidents of teasing and harassment. In case of an eve-teasing incident, the committee would bring the incident to the notice of the panchayat, which will lodge an FIR with the police against the guilty. In case the panchayat fails to take up the matter, action could be taken against them.

There is a sudden spurt in agitations by girl students across the state. Girl students of Panipat’s Nangal Kheri have locked the school gates in a protest to push for the upgradation of their school. Girls at a school in Bhiwani’s Bidola’s village also locked the gates of their school in protest. Many more girls students have also started similar protests. The state education department is finding it hard to upgrade so many schools due the limited availability of teachers. It has already upgraded 42 schools in the state in the last one year.

Now, there are voices within the government who are saying that so many protests were the result of political instigation. Although education minister Ram Bilas Sharma said that, with a view to facilitate girl students, the state government would open hostels and operate buses of Haryana Roadways for their commutation as per requirement. The minister said that government schools that fulfilled the prescribed norms would be upgraded.

Replying to a question regarding the involvement of Opposition parties in the demands for upgrading schools, he said, “It is possible that they are trying to grind their own axes in the name of upgrading girls’ school.” Reiterating the commitment of the government towards ensuring education of girls, he said 21 colleges had recently been established across the state, of which most were girls’ colleges.