Magnum opus on AfPak history Of CIA, ISI at work

A substantial part of the book is about the collusion between Pakistan’s military-controlled spy agency, the ISI and the Taliban. 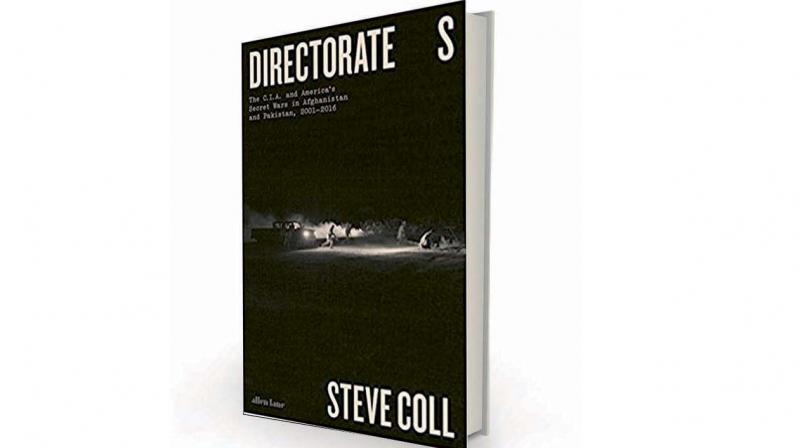 Steve Coll, Pulitzer Prize winning American journalist and author, is no stranger to South Asia. As Washington Post’s South Asia correspondent based in New Delhi, he had covered the region extensively in the 1990s. One focus then and now was Afghanistan where the United States has seen its longest war.

His latest book Directorate S: The CIA and America’s Secret Wars in Afghanistan and Pakistan, 2001-2016 is one outcome of his experiences as was his previous one, Ghost Wars: The secret history of the CIA, Afghanistan and Bin Laden from the Soviet invasion to September 10, 2001 (Penguin 2004).

The latest book, a 757-page magnum opus, offers a ringside view of recent history of the Af-Pak region, providing for the first time an insight into the characters and events that shaped events since the US invasion of Afghanistan in 2001.

Narrated in jargon free, journalistic style, the book, despite its bulk, is an easy and compelling read. The author takes the reader from the backrooms of the CIA headquarters to the killing fields of Afghanistan and the war rooms in Pakistan’s Rawalpindi. The result is a book that will be read and referred to by many generations of South Asia experts.

For the Indian reader, there are many takeaways — one being the suggestion that the US government didn’t really go after the Taliban leadership, despite publicly assailing them. In the beginning of the book, Coll writes that the CIA had Taliban supremo Mullah Omar in the crosshairs a number of times but the expected strike call either never came or was turned down. One serious attempt was made on October 7, 2001, but the Taliban chief escaped the bombing.

“Mullah Mohammad Omar’s death on October 7 might have influenced the Taliban’s evolution, given the divided opinions within the movement’s leadership about how to manage their relationship with Al Qaida after the shock on September 11,” writes Coll. “That alternative history might have turned out no better than what actually unfolded, but as the coming decade’s failures and suffering unfolded, the lost opportunity of October 7 gnawed at several of the military and intelligence officers involved that night. “

This is contrary to the view in New Delhi that Mullah Omar was never seriously targeted by Washington. Even today, the Taliban as a group is not banned by the US, although a few individual members have been designated as terrorists. While the Pakistani Taliban, Tehrik-e Taliban, is on the State Department’s list of Foreign Terrorist Organisations, the Afghanistan’s Taliban is not. Although Coll does not explicitly spell it out, the real American target in Afghanistan was and continues to be Al Qaida, not the Taliban which is seen as being a proxy of Pakistan, a country whose Afghan agenda Washington considers legitimate.

A substantial part of Coll’s book is about the collusion between Pakistan’s military-controlled spy agency, the ISI (Inter-Services Intelligence) and the Taliban. Coll feels there were several reasons why the Americans, the CIA included, tolerated the ISI even when they knew of the collusion. The Americans wanted to be “as close to the ISI as possible so that CIA case officers in Islamabad or offshore could identify and recruit ISI officers as unilateral American sources,” he conjectures.

Washington’s continued ambivalence about Pakistan, the ISI and the Taliban is one reason why the Afghan War ticks on, consuming thousands of Afghans every year. The situation within the country even after 17 years of war, as Coll observes, is far from stable: “President Ghani’s initial plan had been to reduce the war’s violence through reconciliation talks with the Taliban and Pakistan, but these efforts had proved to be as treacherous and unproductive for his administration as they had been for the Obama administration’s Conflict Resolution Cell. On the other side of the war, the ISI’s support for the Taliban remained steadfast… by 2016, Major General Muhammad Waseem Ashraf reportedly ran ISI’s Directorate S. On the Afghan front of external operations, his bureaus seemed to follow a policy of providing as much support for the Taliban as ISI could get away with — just enough to keep the war boiling, while avoiding aid so explicit that it might provoke the international community to impose sanctions on Pakistan or withdraw military sales.”

His book concludes with a view of the Panjshir Valley, where Ahmed Shah Massoud’s Tajik fighters had held out against both the Soviets and the Taliban. It was the frontline from where the 2001 assault on the Taliban ruling in Kabul had begun. “Almost 16 years later, Panjshir was once again preparing its defences. As Ghani and Abdullah struggled to govern, as Nato governments and voters questioned the costs and trajectory of aid to Afghanistan, it was hard to avoid the possibility that the Afghan war might be cycling back toward where it began before the American intervention following September 11,” he writes, sounding an ominous reminder of the overt and secret wars still in progress in that part of the world.

Indranil Banerjie is an independent commentator on political and security issues