A deeply researched thriller on ISIS

The thriller aspect of the book is fairly thrill-less but by the time the plan to get Zahi out is ready, you do feel invested in her escape. 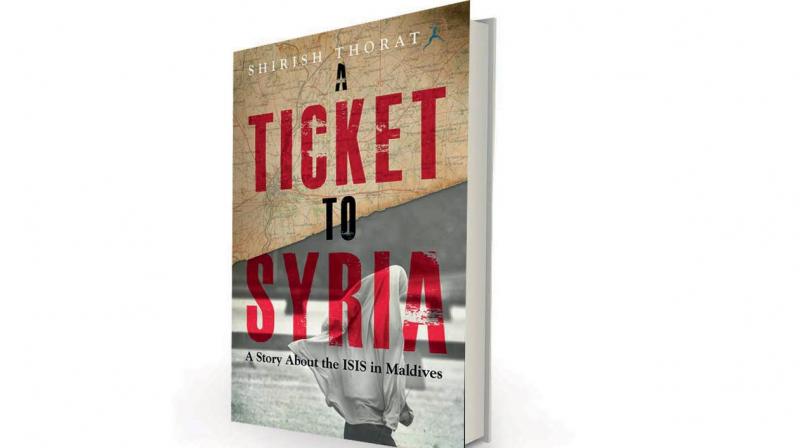 A Ticket to Syria by Shirish Thorat, Bloomsbury India, Rs 399.

Even before I got to page 1 of A Ticket to Syria by Shirish Thorat, I knew I would not require a manicure after I finished the book. Though the story is about getting a young woman from the Maldives out of Islamic State-held Syria where she was tricked into going by her radicalised husband, I had a strong feeling that there’d be no nail-biting suspense and therefore, no cuticles would be harmed in the reading of this book.

That’s because the author’s note that preceded the story made it clear that Thorat, a former police officer, was more interested in telling the Islamic State (IS) story than in creating a thriller, though he says the events of the novel are fictionalised truth.

You’d imagine then, that I was bored by this thrill-less thriller, that I would curse the writer, his publisher, and my editor for the fact that I had to read it, and that I would suggest that you spend your money and time more usefully on, say, fridge-cleaning equipment to eliminate the last stain of eight-month-old chicken butter masala from the shelves of your leftovers-stuffed refrigerator than on buying and reading this book.

If you did imagine that, you’d be so, so wrong. This is a good book, even if it is less of a thriller than it should be. Because never before has the Islamic State of Iraq and Syria (ISIS) been explained to me so simply that I now actually understand what is going on in an area of the world that I have long mentally marked as FUBAR — F**ked Up Beyond All Recognition. And if, at times, in the explication of the ISIS, I got a slight feeling of discomfort as though this were a textbook I needed to mug up for an exam, it was something I could quite easily overlook, because the subject is so fascinating.

A Ticket to Syria is ostensibly about Zahi, a young woman from an increasingly radicalised Maldives, who thought she was going on holiday to Singapore with her husband, and his family but wound up in the heart of ISIS-held Syria. Almost her whole family of in-laws has been radicalised. Two sisters-in-law have abandoned their husbands to move to Syria with their children; her own husband has suddenly changed personality and one sister-in-law and her husband are eager to kill themselves for the cause.

Back in the Maldives, Zahi’s brother Ahmed is frantically trying to find her, but he knows that government and police sympathy are pretty much with the IS. So he calls an old friend from college for help. Ahmed’s friend is a very useful man, the kind of person who knows how the underworlds work and what violence is about, which is why he is simply known as the Contact.

When Zahi finds a throwaway phone among her belongings, one she’d bought on a visit to Mumbai a few months earlier and had forgotten she still had in her bag, the Contact knows that he has some collateral to work with. That functioning but secret phone would be very useful to the United States; Zahi could serve as an inadvertent spy in exchange for help. But the Contact has other contacts who are even more useful, including a spice trader-cum-smuggler in the area who had once fought in Afghanistan, and the genial captain of a merchant navy ship used to illegally collect heavily-discounted oil from ISIS-held regions of West Asia for sale in the open market.

Thorat uses Zahi’s story to tell the story of the Islamic State: Why, where and how it came to be, what its objectives are, how it accomplishes its goals, how it perceives itself in the world, how it compares with all the other radical Islamic groups, how it markets itself as desirable, how its economy functions, how ISIS cells are formed in countries around the world, including India, and so on. Though, as I said earlier, there is a faint whiff of the textbook about this information, it’s simply told and utterly fascinating — you can see why and how so many people in the world perceive the ISIS as a legitimate regime. The thriller aspect of the book is fairly thrill-less but by the time the plan to get Zahi out is ready, you do feel invested in her escape. And the Contact, despite being all-knowing and superhero-ish, is very endearing: the man who can calmly pull a person out of a country under a brutal regime with no official backing is also a man whose omelettes never turn out well and whose koi fish will not eat out of his hand.

I may have been disappointed when I read the author’s note before I started the book, but by the time I finally put it down, I found it hard to bring myself back from Syria to India. That, to me, is a sign of a good book. So go forth and get this novel while I frame an email to its author, asking him for another book on similar line, but this time looking at the RSS. I think it’s time this particular fundamentalist organisation is just as deeply researched.