Jagannath Panda
The writer is a fellow and centre coordinator for East Asia at the Institute for Defence Studies and Analyses, New Delhi

About half of Chinese imports to the US have an additional 10% duty, while China has, so far, retaliated with tariffs on US goods worth $110 billion.

The Chinese leadership should be made to realise that China’s global rise is not an exclusive phenomenon, and should not be at India’s expense as a regional and global partner. (Photo: PTI/File)

America-China relations are witnessing a confrontationist-competitive shift. India must plan to take advantage of anti-Chinese measures the USA is internationalising.

It is no more just “trade friction” or a “trade war” between the United States and China. Rather, it is becoming clear that the US-China relations witnessing a power rivalry that is very much deliberate, different from their usual Cold War rivalry. The ramifications of this new rivalry will affect every system, sectors and countries in some form or the other. This is due to the structural linkages that the US and Chin-ese economies enjoy with the global financial and pol-itical system. How should India view and respond to this growing power rivalry between them?

India’s choices are plenty. However, India must exercise caution while responding to this tug-of-war. No matter how institutionalised the US-China relationship currently is and how significant their economic ties is for global economic stability, their intensifying trade conflict is likely to strengthen further. New flashpoints are emerging, moving from economic and security aspects to balance of power in times to come.

It is evident that the US-China relationship will not return to their “old status-quo” immediately.  Indeed, a consensus seems to have been arrived in Washington policy circles that no matter who reigns in the White House, the American world will not be seen as compromising to its prime global ‘competitor’, China. The U-S-China ties is witnessing a shift to one that is more confrontationist-competitive from a cooperative-competitive post-Cold War China policy. That means, India must note that it is an ‘American war on China’ rather than ‘China’s Ame-rica war’. India must plan to take advantage of the ‘anti-Chinese’ measures that the US is internationalising through its current trade war without making an obvious anti-China posture in Indian foreign policy. A number of spheres of influence are likely to emerge to which India should carefully aim to position its leverage.

First, a new momentum could be built in India-China relations itself, mainly in the economic domain. The Chinese leadership should be made to realise that China’s global rise is not an exclusive phenomenon, and should not be at India’s expense as a regional and global partner. Beijing must revisit its arrogant approach towards India. There are encouraging signs already though, with the Chinese Embassy spokesperson Ji Rong stating that “China and India need to deepen their cooperation to fight trade protectionism”. Though stated multiple times now over the last decade, it is yet to be finalised on how to fight a “trade protectionism” and a range of economic issues, from bilateral to multilateral, need to be discussed. Both India and China should should focus to strengthen the Strategic Economic Dialogue, Financial Dialogue and the India-China Joint Eco-nomic Group (JEG) meeting. These dialogue must bring global substance to India-China relations. 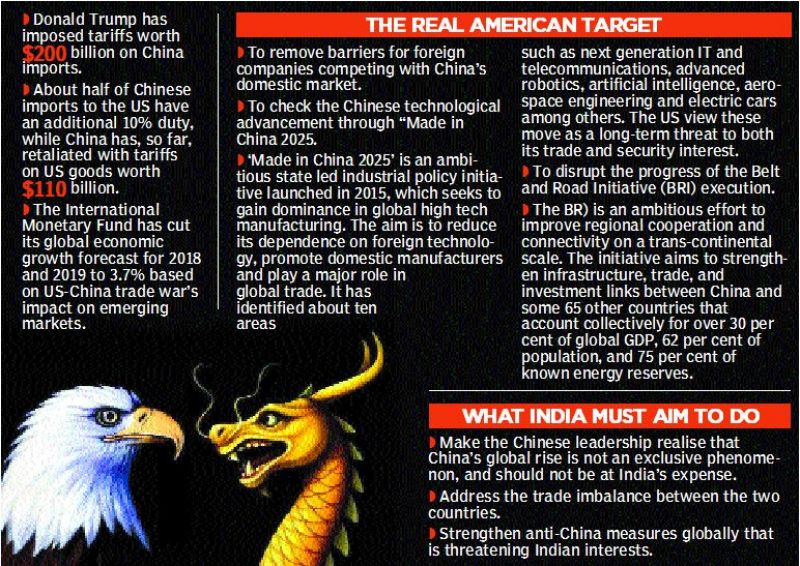 Second, bilaterally, India must aim to address the trade imbalance between the two countries. Already a good momentum has started in India’s favour with China reducing non-tariff barriers on non-Basmati rice, and also removing import duties on anti-cancer pharmaceutical products. The issue, however, should be attended keeping in view that trade imbalance might grow further when India and China emerge as de facto free trade agreement (FTA) partners post the Regional Comprehensive Economic Partnership (RCEP) negotiation. Multilaterally, India needs a concentrated dialogue with China to have a better interaction within the framework of emerging economies. The American allegation against Beijing might be that China is taking undue advantage of the global governance structure as a developing economy while its economy has substantially developed. For India however it makes sense to treat China as a developing economy partner to serve its interests from climate change to reforming the global financial institutions.

Besides, the India-China multilateral interaction in financial institutions has grown post-BRICS formulation, particularly with the emergence of New Development Bank (NDB) and Asia Infrastr-ucture Investment Bank (AIIB). Still, the emerging economies need a better space in the classical Bretton Woods institutions, in terms of better representation and securing better voting rights. India needs to strike a deal with China on this.

Third, Trump’s trade war with China is not all about tariffs, or aluminium, cars or steel products. It is connected to a range of other issues relating to China’s ever-growing linkages with the global supply chain and governance structure. The real US target is, therefore, to soften China’s attitude towards global accountability, transparency and remo-ve barriers for foreign companies competing with Chi-na’s domestic market. The eventual aim is to check the Chinese technological adva-ncement through “Made in China 2025”, which would primarily threaten US supremacy in technology and global operations. Thus, the Chinese would be searching for new markets, including India, to sustain their “Made in China 2025” campaign. Though every Chinese technological product comes with the baggage of Beijing being a ‘suspect’ power in the Indian market, there are softer technological areas of cooperation possible. Advanced railway equipment, new-energy saving vehicles, agricultural machinery, bio-medicine and high-performance medical devices are products that India could import from China to start with. 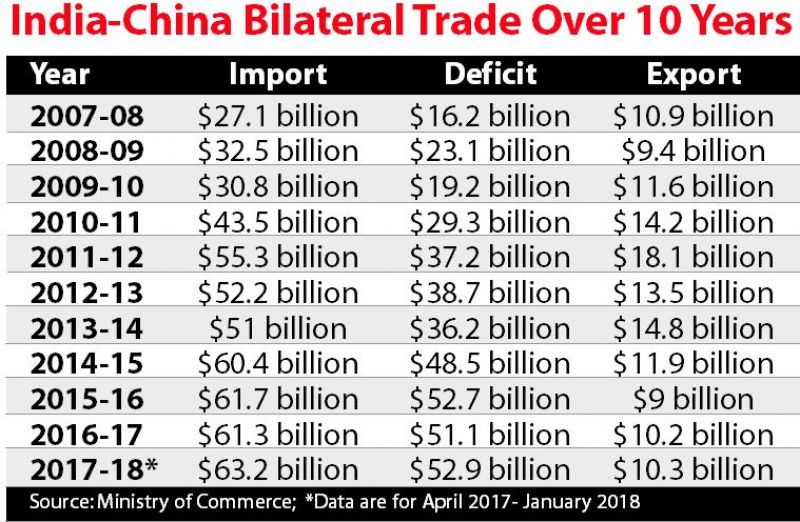 Fourth, India also equally needs to strengthen anti-China measures globally that is threatening Indian interests. India could expedite regional and global understanding on pressing issues like connectivity and investment infrastructure with the US and other partners such as Japan to balance out China’s outreach, mainly arising from its Belt and Road Initiative (BRI). Strong global activism required to question China’s non-transparent project executions across the Indian Ocean Region (IOR) and beyond, mainly in Africa. The African world needs to be taken into greater confidence by powers such as India, the US and Japan for which a greater coordination is required. A proposition like the Asia-Africa Growth Corridor (AAGC) between India and Japan should be nurtured. Trump’s National Security Strategy (NSS) paper calling China a ‘revisionist’ power has much subtext.  The Americans are aware that if BRI succeeds, it will not only strengthen the Chinese economy but also amplify the rule of the Communist Party of China (CPC). Therefore, one of the main intents behind Trump’s trade conflict is to disrupt the progress of the BRI execution. This must encourage India to better posture itself in the Indo-Pacific coalition and protect its commercial and strategic interests without antagonising China.

Moving away from non-alignment has been prudent for India, enabling it to take advantage of both the American led “Washington consensus” and the Chinese led “Beijing consensus”. India must, however, realise is that the US is not only in a dispute with China, but with its alliance partners as well, including the European Union, Mexico, Russia and Canada. This must impart India to not put all its eggs in the same basket but widen its economic trade linkages. India’s recent decision to go ahead with Moscow on the S-400 deal despite US pressure through CAATSA signifies the ripeness of India’s pluralistic foreign policy. New Delhi’s association with both Russia and China within and outside the SCO structure needs to be strengthened and diversified. India needs to see its cooperation with the EU in new light. In brief, the US-China ongoing rivalry is largely a post-Cold war inheritance: China is trying to establish a new international system while the United States wants to preserve its supremacy over both the international system and the global order. It is time for India to not just look beyond the US-China prism, but act on strengthening that stance.

Dr. Jagannath Panda is a Fellow with the Institute for Defence Studies and Analyses (IDSA), New Delhi. He is also the Centre Coordinator for East Asia.