The joint statement did not shy away from expressing perspectives different from those of the United States and its allies. 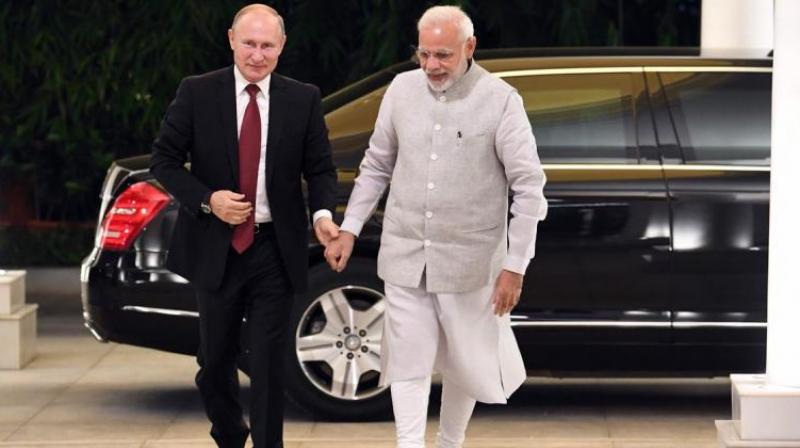 Four major themes featured in the recent India-Russia summit and the Eastern Economic Forum (EEF) at Vladivostok, in Russia’s Far East — a reaffirmation of the strategic partnership; assertion of India’s strategic autonomy in international relations; developing a broader economic agenda for India-Russia cooperation beyond defence; and initiating an Indo-Pacific engagement with Russia.

Prime Minister Narendra Modi talked of a qualitative and quantitative leap in relations. Russian President Vladimir Putin described India as a “key partner”. The India-Russia joint statement says bilateral relations are a foreign policy priority for both countries. Reinforcing these words was the personal chemistry demonstrated by the two leaders, during many hours in the company of each other, visiting a shipyard and an exhibition. In another special gesture, President Putin announced the release of a stamp, commemorating Mahatma Gandhi’s 150th birth anniversary.

The joint statement did not shy away from expressing perspectives different from those of the United States and its allies. It declares that bilateral relations are not “susceptible to outside influence”. It expresses opposition to protectionism and unilateral sanctions, endorsement of Syria’s reconstruction efforts, support for economic cooperation with Iran and opposition to politicising the implementation of the Chemical and Biological Weapons Conventions.

There were expansive declarations of intent to diversify the economic engagement. The Strategic Economic Dialogue, launched after the “informal” bilateral summit in Sochi in May 2018, has resulted in a comprehensive strategy for expanding trade and investment cooperation. It was agreed to fast-track negotiations for a Free Trade Agreement with the Eurasian Economic Union (of Russia, Kazakhstan, Belarus, Armenia and Kyrgyzstan). Trade settlements in national currencies would be explored. Connectivity would be improved through passenger and cargo flights connecting regions of both countries and industrial partnerships in roads, railways and aviation. The effort would be to increase the bilateral trade from the present $11 billion to $30 billion by 2025.

An ambitious five-year roadmap has been drawn up for cooperation in hydrocarbons. It builds on already existing Indian investments of about $10 billion in Russia and Russian investment of about $13 billion in oil refining and downstream products in India. It envisages further Indian investments in oil, gas and LNG projects, as well as long-term purchase contracts. India is already a significant buyer of Russian hydrocarbon products, importing about 2.3 million tonnes of oil and 550,000 tonnes of petroleum products in 2018. About 20 per cent of Russia’s LNG exports in 2018 were to India. As India diversifies its defence acquisitions, reducing its total dependence on Russia, strengthening other pillars of the bilateral relationship will sustain its vibrancy.

At the EEF, Mr Modi emphasized India’s commitment to the development of Russia’s Far East, including potential investments in energy, health, education, skill development and mining. He offered Indian manpower for agricultural and industrial projects. About 50 agreements worth about $5 billion were concluded on the margins of the forum. The two governments agreed to establish a maritime corridor between Vladivostok and Chennai ports. Indian public and private companies entered into coal supply and mining agreements; India is already a major coal importer from Russia.

Remarkable as these developments were, they were eclipsed by Mr Modi’s announcement of a $1 billion line of credit (LoC) for the region’s development — a major departure from India’s policy of extending LoCs to developing countries.

President Putin’s vision for the Russian Far East combines the domestic goal of harnessing its huge potential to power Russia’s economic growth, with the strategic objective of attracting a broad spectrum of international investors, so that China does not dominate the region. He has assiduously wooed investment from Japan and South Korea. India’s participation in this effort is, therefore, welcome. For resource-hungry India, access to the region’s abundant natural resources is an attractive proposition. Additionally, the Vladivostok-Chennai link creates a shared commercial interest in the Indo-Pacific.

President Putin talked in his press statement of India and Russia working together for security and stability in the Pacific and Indian Oceans. Mr Modi said they had a “useful discussion” on an open and inclusive Indo-Pacific. This is a dialogue of great consequence. Russia sees the Indo-Pacific as an American construct, to draw India into an alliance against China and Russia. India sees it as a geographical area of economic and security interest, to which its access should not be denied by the hegemony of any country. This should be in Russia’s interest as well. Our discussions with Russia and closer engagement with its Far East, including in Arctic hydrocarbons projects, should drive home this message.

The 2018 India-Russia Summit was overshadowed by the threat of American sanctions for India’s purchase of the S-400 air defence system. The Vladivostok summit was spared this drama. Military-technical cooperation was discussed and an agreement signed for production of Russian military spares in India.

Russia’s response to recent developments in Jammu and Kashmir ensured a harmonious setting for the Vladivostok summit. Its foreign ministry stated publicly that decisions on Article 370 were within the framework of the Indian Constitution. Russia distanced itself from the Chinese initiative at the UN, declaring that Pakistan’s differences with India should be settled bilaterally. This sensitivity to India’s core interests was worthy of a strategic partner.

The thrust at Vladivostok to diversify the economic component of the India-Russia partnership and impart new geopolitical content needs effective follow-up. Business and banking communities in both countries have to dispel mutual ignorance of opportunities. This includes misconceptions in India about the application of Western sanctions against Russia. The facts that the Russia-Europe economic engagement is re-intensifying lately and that many American companies were at the EEF should open Indian eyes to ground realities. Innovative guidelines have to be developed for disbursing the LoC. More dialogue with Russia at official and non-official levels could synchronise perspectives on the Indo-Pacific. A robust partnership with Russia gives India both economic opportunities and political manoeuvring space vis a vis the other great powers.