Confused CPM heads for another blunder?

It is remarkable the Congress and CPI(M) continue to be partners even after rejection of support. 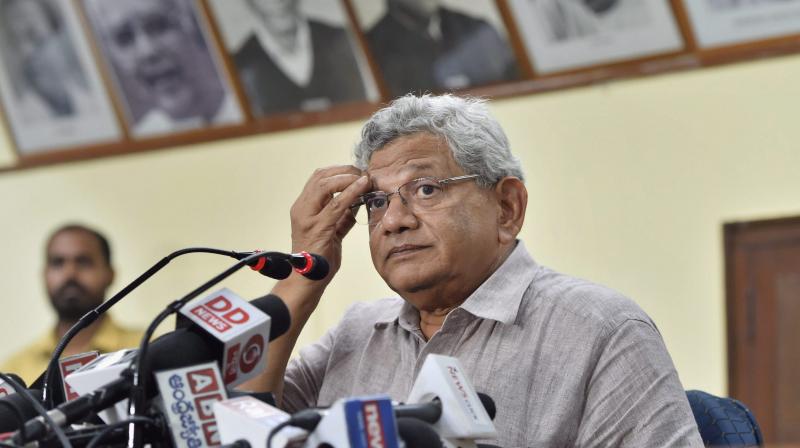 Insulated against the corruption of neo-liberalism, the Left bloc’s flag-bearers in Indian politics — mainly the Communist Party of India (Marxist) — appears determined to follow the light cast by ideological purity by discarding the company of polluters, namely the Congress. For this, does the CPI(M) deserve a hurrah, or hoots of derision? Its half-hearted zigzag route across the molten political field, to paraphrase Karl Marx, indicates a reluctance to risk getting hurt by seizing the moment if it tries to look for new ways to make a turnaround. It reveals a confusion within the CPI(M) on where it sees itself in the contemporary political struggle between the Hindutva Right and the rest of the Indian polity.

From the outside, in simple and practical terms, a larger, more inclusive unity against the BJP’s triumphant rise seems the obvious course of action for a party that has been almost consistent in its principled defence of secularism and diversity. Till Prakash Karat’s reassessment of the RSS, and therefore the BJP, as not exactly fascist outfits, the CPI(M) had consistently described the saffron Right as fascist.

As it a recurrent tussle that keeps popping up — of how far the CPI(M) should venture beyond the boundaries defined by its “political line” that unequivocally bars “understanding or alliance with the Congress” — the party must explain more than it has so far. The party ducked addressing the more difficult and wider question: should Sitaram Yechury, who is both pragmatic and charismatic, be allowed to lead the CPI(M) from inside Parliament as a third-term Rajya Sabha member, well as on the outside as general secretary, or should he be confined to wearing only one hat.

The question — pragmatism or incoherent idealism — was reframed as a simpler choice, between taking support from the Congress to get Mr Yechury elected or rejecting the offer, though everyone knew local political considerations in Kerala and Tripura prevailed over defining the CPI(M)’s role in tackling what it believes is the bigger national crisis.The CPI(M) once again did what it has repeatedly done since 1996 — slammed the door shut on what most people would consider was an opportunity to use the amplification of messaging that membership in Parliament offers to a skilled leader and build a better platform to take on the BJP-RSS offensive. Mr Yechury’s abilities as a parliamentarian are impressive and effective. To lose that advantage at a time when the CPI(M) is seriously handicapped by the haemorrhaging, almost comatose, state of the party in West Bengal, seems a tactically myopic move, because its ability to represent “the people” and have a significant base could erode further in the next round of elections.

The move is also inconsistent with the CPI(M)’s pragmatic collaboration with the Congress inside and outside Parliament, before and after it rejected its support to get Mr Yechury re-elected. It joined the Congress and its arch-enemy in West Bengal, Mamata Banerjee, at a New Delhi meeting to chalk out a joint offensive strategy against the Narendra Modi government. More than that, a committee to coordinate the offensive within and outside Parliament was also set up, of which Mr Yechury is a member.

It is remarkable the Congress and CPI(M) continue to be partners even after rejection of support.

The Opposition’s weakness, the BJP’s strength and its transformation into a winning machine may make new bedfellows out of hitherto antagonists, but it is also Mr Yechury’s abilities as a leader that the snobbery of his party in snubbing the Congress over support on his nomination hasn’t triggered a breakdown.

This makes Mr Yechury as adroit at negotiating with parties of the Opposition as his mentor Harkishen Singh Surjeet was at one level, and as acceptable as a politician in difficult times as Jyoti Basu was through the 1990s and up to 2009.

The CPI(M)’s rejection of non-Left or Congress support from 1996, when the prime ministership was offered on a plate to Jyoti Basu and turned down by the party after two reconsiderations, is based on two things. First, its perception of its difference from the other “bourgeois” political crowd; and second, an admission that even though it has proved itself to be remarkable by punching way above its weight in national politics, it is nevertheless a small party with limited regional presence.

For Jyoti Basu, the squandering of opportunities were repeated “historic blunders”. He was candid in his appraisal of the loss; he believed if the CPI(M) had taken centrestage, it could have impacted policymaking at the national level far more than it did in 2004, when it traded in the offer of deputy prime ministership under Manmohan Singh for the less powerful job of Lok Sabha Speaker. In shying away, the CPI(M) failed to do what the BJP has done since 1998 —grown to the point where it seems set to challenge the basics: communal harmony, diversity and democracy.Every time the CPI(M) is unable to decide, once and for all, whether it should join forces with the Congress to defend the foundational values of Independent India as a secular republic or whether it should have one foot across the line and one foot inside the safety of its ideological bastion, it bleeds. In West Bengal, the division provoked some to say, albeit sotto voce, separation.

The CPI(M), it seems, can’t make up its mind what to do, and which is the greater evil — the BJP-RSS’ civilisational agenda or Congress’ neo-liberal policies. While prioritising national political problems would seem the obvious course for the CPI(M), within the party regional electoral factors seem to invariably win.

Every time, since 1996, Mr Yechury has been on the losing side. As full-time party boss, he now has an opportunity or a challenge — figuring out where the party should be headed and getting the majority on his side, ending the seesaw act that made the CPI(M) a weak force.

Farrukh Dhondy | Will BoJo and his chamchi Clueless get me deported to Rwanda soon?