From tomorrow, he's not going to just stand around being photographed

Special team set up to track down 20K foreign-returned people 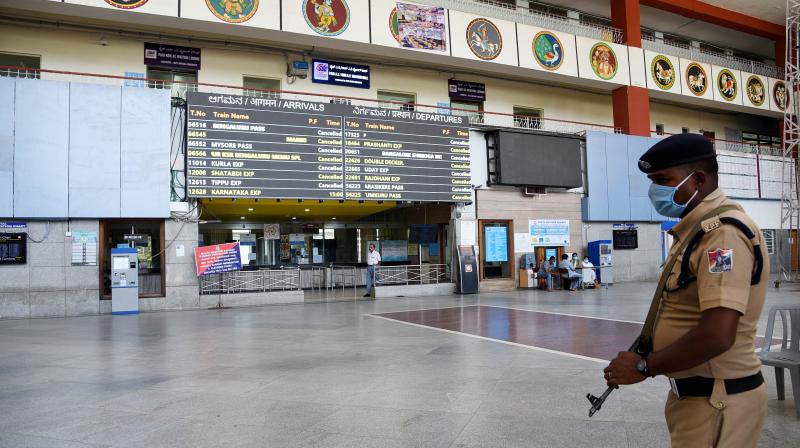 A cop surveys the scene at the Kempegowda International Airport during Bengaluru's lockdown on March 21. (Photo: Satish B)

Bengaluru: Police commissioner Bhaskar Rao has announced a complete clampdown in Bengaluru till March 31 to stop the coronavirus Covid-19.

People have been told to follow the government’s clampdown orders seriously. If anyone is found violating orders, action will be initiated against them under IPC section 270, he warned.

Special teams have been formed to keep vigilance on foreign-returned people. Some 23,000 persons who have returned from abroad are yet to be tracked.

Services of Ola, Uber and otheer taxicab services have been suspended.

Friday prayers in Masjids have been suspended.

People have been told to celebrate Ugadi festival inside their homes.

Swiggy and Zomato will be allowed to deliver food.

All hotels will not serve but will open takeaway counters.

Policemen will be out to monitor the situation in the localities. Karnataka State Reserve Police (KSRP) platoons will be deployed across the city to assist the police department.

Local police stations will take a call on which shops can remain open.

Commissioner Bhaskar Rao chaired a high-level meeting of all senior police officers including 18 DCPs and 40 ACPs in the city..

A special team of personnel from the police and the BBMP has been set up to monitor people in quarantine.

The team has received inputs from the Kempegowda International Airport (KIAL) that as many as 43,000 persons returned from various countries between March 8 and March 19.