Lessons on the chord

A septugenarian in Matunga is teaching a new generation how to make music with the violin. 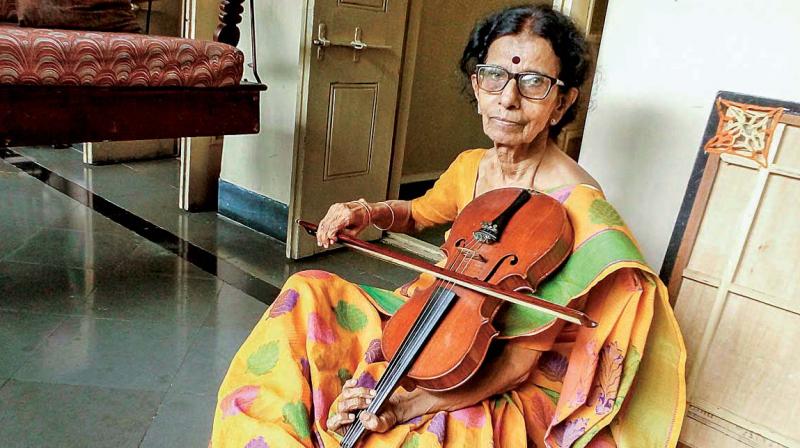 Some stereotypes perpetuate themselves. If yours was a South Indian childhood, chances are you were conscripted into a classical music or dance class. I, too, was dragooned into learning the mridangam, a percussion instrument that, to my primary school eyes, resembled two tablas toppled over and tied together. I didn’t enjoy it. My palms ached from banging away on goatskin, and my ankles chafed under the barrel-shaped drum. After a year or two, I quit. I still remember the beats though: ki-ta-tha-ka-tha-ri-ki-ta thi-ku-tha-ka-tha-ri-ki-ta…

Then, in my teens, I watched an indie film called Morning Raga starring Shabana Azmi as a Carnatic vocalist. Its soundtrack featured several violin interludes that left me spellbound; how could anything sound so plaintive and joyful, often simultaneously? My friends grew up playing air-guitar; I grew up playing air-violin.

In a second-floor flat of an 80-year-old Matunga building lives a lady who plays and teaches the real McCoy. Her student — my friend — had mentioned she’s a septuagenarian, but Ms. Suseela Subbarayudu looks two decades younger. She was born and raised in Matunga and started learning the violin when she was 20. “Both my elder sisters were vocalists,” she says, “So my mother, a veena player, suggested I learn an instrument. I’d grown up with a background of raagam (melody) and taalam (rhythm), so I did want to learn.” She studied with her teacher for 15 years and began learning Bharatnatyam simultaneously.

In the late ’60s, Ms. Subbarayudu auditioned for All India Radio, that behemoth of musical repertoire, and performed regularly over two decades. “Earlier there would be frequent kutcheris (concerts) at the Bhajana Samaja temple nearby,” she says, “where I would accompany artistes such as Alamelu Mani.” Mrs. Mani is one of Mumbai’s finest teachers of Carnatic vocal music. My generation may know her only as Hariharan’s mother.

But sparsely built and sparring with words, Ms. Subbarayudu greets her student with an “After how long are you coming to class?” and smiles slightly at the sheepish “Three weeks”. Among her students are a doctor, an engineer and college kids; she does not refuse anyone who wants to learn. They sit cross-legged on the floor. Their violins emerge from two black instrument cases: the student’s is a gleaming reddish-brown, the teacher’s a muted mocha. The teacher carefully tunes both, adjusting the pegs, hazarding a few test notes, until she is satisfied with the sound. The student moistens her fingertips with a little coconut oil. They pick up their instruments, ornate scroll resting between right ankle and heel, broad base tucked under chin. This is a democratic class — the teacher asks the student which varnam (composition) she’d like to play — and music fills the room.

A horse-string bow glides diagonally across the waist of the violin, producing notes I cannot identify but wish I could. Four fingers dance upon the strings, leaping here, landing there, sliding down the neck in a graceful glide. Suddenly, the music stops, and the student wails, “I don’t remember anything!”

Ms. Subbarayudu shoulders her violin, and the deeper, richer timbre of her skill blends with the strokes of her student, transforming the music into more than the sum of its parts. The student occasionally glances at her teacher’s fingers to confirm the correctness of her technique; the latter inspects the former’s method and plays on. What little conversation there is occurs in muted, low-pitched tones: “Don’t pause there”. “Repeat that”. Two right feet gently tap the floor, keeping time. This is a feast for the ears and the eyes. My head begins to move in a complicated pattern, attempting to trace the music in the air. The traffic outside is dulled, domestic noises subdued. When the twain begin to play my favourite Carnatic piece, I cannot stifle a smile.

Because, as Kurt Vonnegut said, “We must practise any art, no matter how well or badly…”, not to get money and fame, but to experience becoming. To find out what’s inside us. To make our souls grow.