Mumbaikar awarded with Bharat Prerna Award didn’t let his disability come in the way of his fight for better facilities for the disabled. 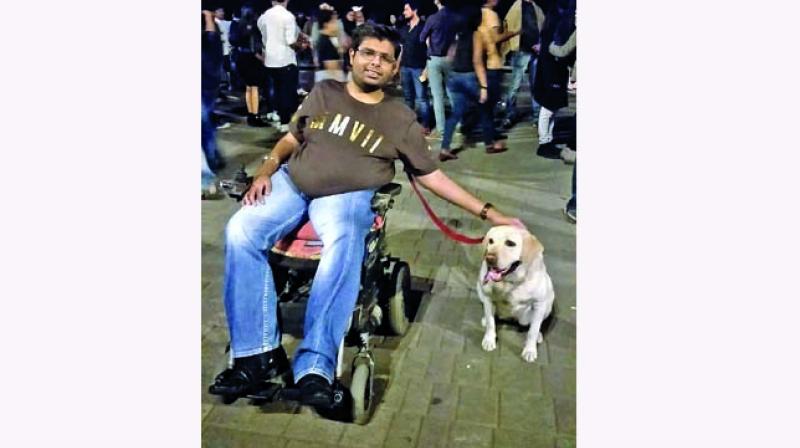 Twenty-year-old Karan Shah is not your usual millennial. For someone with spinal muscular atrophy, Shah never let the disability come in between his way; Shah is a man with many feathers in his hat— motivational speaker, certified canine trainer and behaviourist, dancer and also a Samaritan fighting for clean accessible toilets for the disabled.

And recently his work was recognised by an NGO Ample Missiion who conferred him with Bharat Prerna award for all his selfless work. “It feels great. Especially this award, though it’s from an NGO, people from the disabled sector across the world contented for this award and I feel lucky to have received it,” he says.

Last year when Shah took upon himself to take samples from his father’s new warehouse to every garment shop, he met with the challenge of finding a public toilet that would allow a wheelchair.

“I was on the road from 9am to 6pm, and needed to use the washroom. But to my surprise, none of the public toilets from Ville Parle to Dadar were fit for disabled people. One in five that we spotted, either had a steep or narrow ramp or the toilet inside was in a bad condition,” he shrugs.

In his findings, Shah came across a public toilet in Sewri that is deep inside and has three huge steps and a narrow path to enter. “My only request is that if there are seven public toilets in Dadar, make at least two wheelchair accessible,” he urges.

In his attempt to bring the attention of concerned authorities, he has written a few letters to the government and the BMC but to no avail. “My fight continues. I am thinking of putting out a rally with all the disabled people because all I want is our voices to be heard,” Shah asserts.

While he continues to fight for what he deserves, his other work, also constituting a part of his award, is his canine training with his dog Angel Shah. The five-year-old Labrador was given to Shah, by their family friend and choreographer Shiamak Davar, after his brother, Mihir, passed away eight years ago.

Though Angel helped Shah get out his sombre state post his brother’s death, it was canine behaviourist and trainer Shirin Merchant who changed his perspective towards dogs being merely a pet.

“Shirin taught me how a dog can change a person’s life. Since Mihir was the only one with whom I could share things, then I started to talk with Angel and realised she will not judge me,” he shares.

With Shirin introducing him to the concept of therapy dog training, taking him to various sessions, Shah rose to realise that how Angle got him out of depression making him a different person, it was time to give back to the society. Shah then trained Angel to be an assistant dog and claims her to be the only assistant dog in India. “She is over-friendly,” he chuckles describing Angel.

“I tell people that this is not the ending. No matter how bad the circumstances are but this is not the end. This is just the beginning of evil ending and something good is coming up,” he says, adding, “With Angel, I do live demonstrations showing what she does for me. When it comes to special kids like if a kid ahs dyslexia and while reading he is murmuring, I have trained angle to hug or lick that child encouraging him do to more. Even during exams, just day or two before the day I tell the students to take Angle in a room and just talk to her. Many have felt good while many have come out crying.”

As he continues to fight for his community, Shah will soon be opening a training center in Dadar where he will conduct workshops with kids and patients.

“Though the center will be functional in another month, I am also trying to get the attention of authorities towards the footpath. I have realised that even footpaths aren’t wheelchair friendly, for which I have written to BMC but the condition remains the same,” he concludes.