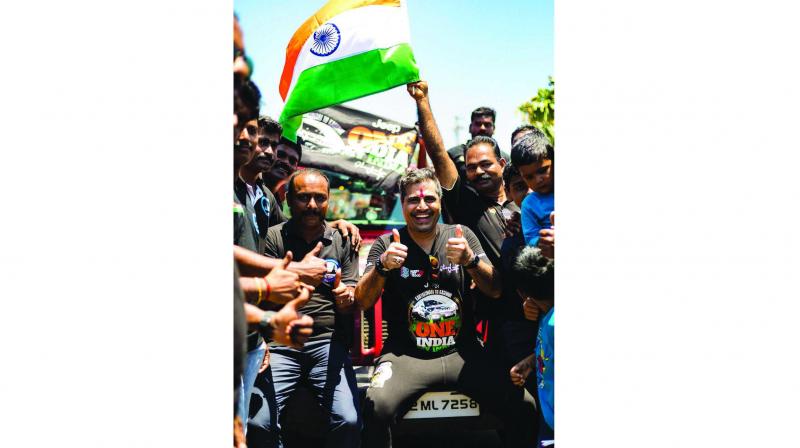 Shailendra Singh with the Kanyakumari Jawans.

After covering over 7,000 kilometres through 11 states and 15 cities in 18 days, director-singer-producer-entrepreneur Shailendra Singh is back home in Mumbai and elated about the completion of his ‘One India My India’ rally.

Singh, who met close to 50 unsung heroes on this voyage, is extremely inspired by their sensational aura and selfless service to humanity. “They all used one word — ‘Seva’ (service), which didn’t make sense to me earlier, but now is clear. After meeting these people, the definition of celebrity has changed for me,” says the entrepreneur. “We went to a special school in Kolhapur where blind girls aged 10 and 14 presented us with the paintings they made. The painting I picked was made by a boy who paints with his mouth, as he has no hands, and he was the most cheerful person in the room,” he adds.

On the last leg of his rally, he met Raj Singh in Jammu who, after giving 30 years to the armed forces, has dedicated his life to training underprivileged children for the army. “He is fondly called Chachu and has so far trained close to 500 kids, out of which 90 are in the forces. He does this free of cost,” shares the singer.