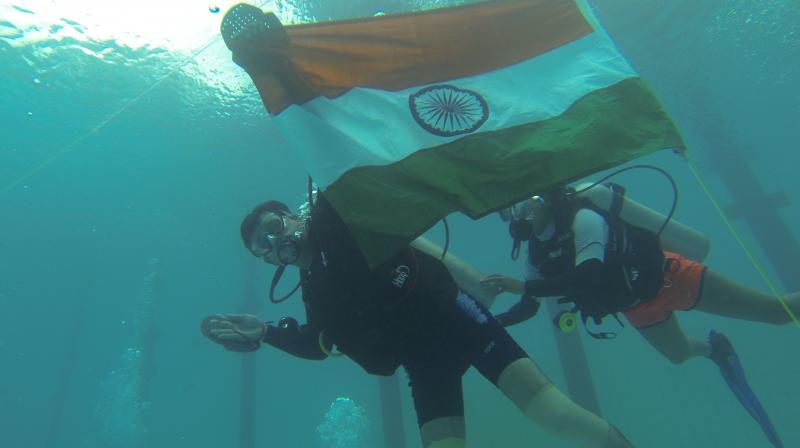 The event was organised to celebrate the paraplegic heroes of our country where the entire concept was to make them experience freedom underwater.

Mumbai: August 15, 1947 marked the Independence of India. And while we reap the benefits of the freedom from our homes 70 years later, there are others who are risking their lives at the borders for our safety.

In a humble quest to give back to these courageous jawans, Finkick Adventures organized a fund-raising event called the 'Freedom Dive'. The event was organised to celebrate the paraplegic heroes of our country where the entire concept was to make them experience freedom underwater.

These individuals have lost mobility due to spinal cord injuries sustained in the line of duty and are residing at the Paraplegic Rehabilitation Centre in Khirkee, Pune. The team of five - Suresh Kumar Kirki, Min Bahadur Thapa, Tapas Kumar Roy, Naina Singh Thapa and Amol Boriwale - are also a part of the Indian Para-basketball team and have recently bagged the bronze in the 4th Bali cup wheelchair basketball tournament held in Bali, Indonesia.

Speaking at the event, Min Bahadur Thapa, a sepoy who served in the Indian Army recounted the horrifying incident which left him paralyzed below the chest.

“I was on my way to India-China border. We were travelling in a Civilian van through UP when a bunch of goons got into the bus to rob the Passengers. I stepped up to stop them but in the process they shot me in the neck,” he says before going on to add, “The bullet severed by spinal cord at the D3/D4 vertebrae leaving me paralyzed below the chest.”

However, his excitement was visible when he added, “I now swim freestyle, backstroke and looking forward to scuba diving as a sport.”

Speaking at the event, Ankit Saboo, co-founder of Finkick Adventures said, “To see these brave jawans taking the dive and breaking free from their bodily limitations, was the biggest reward for us. This was the first time that all five Army veterans went underwater, and experienced a different world for themselves. Their happiness and satisfaction gave us immense pride at the end of it.”

The Jawans were accompanied and guided by Kshitij Mittal, founder of Finkick Adventures and a trained disability diving instructor.