From a son to his father

Through his memoir titled The Non-Conformist: Memories of My Father Balraj Sahni, Parikshat Sahni reminisces about his father. 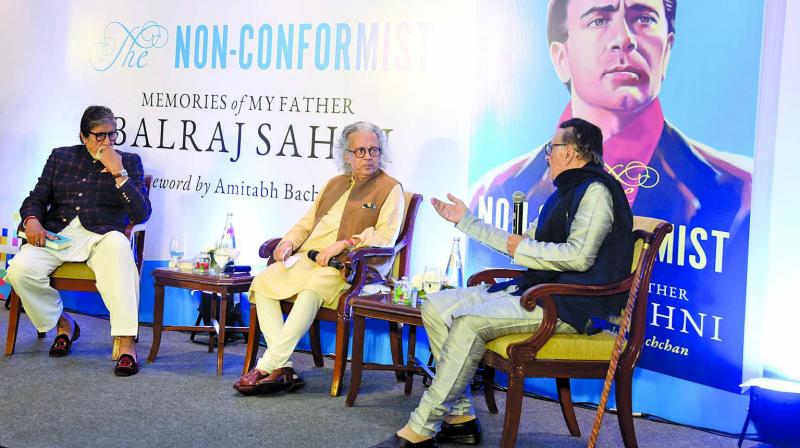 (L-R) Amitabh Bachchan, Anil Dharkar and Parikshat Sahni in coversation at the launch of The Non-Conformist: Memories of My Father Balraj Sahni.

The legendary actor Balraj Sahni is regarded as one of the finest and most revered actors of the golden ear of Indian cinema. Be it the classics like Do Bigha Zamin, Kabuliwala or Garam Hawa, his style of the portrayal of emotions and expressions has inspired the likes of Amitabh Bachchan, late Om Puri among others.

While his work as an actor and a writer is widely known, Sahni’s role of a father has never been out in the public. So bringing to the fore that unknown side of Balraj Sahni is his son, actor Parikshat Shani, who has pended the memories of his father in The Non-Conformist: Memories of My Father Balraj Sahni.

“There are thoughts and memories that keep lingering at the back of your brain but you never realise them. And his, my father’s, memories had been swirling in my head for a long time. As a son, I felt my responsibility would only be fulfilled when I bring forward the real Balraj Sahni to the world. And I did it,” said the 75-year-old actor at the book launch that saw Amitabh Bachchan in attendance.

While the thought of a book had been subconsciously playing in the back of his mind, it was his friends who persuaded him to put his pen to paper. “A journalist friend of mine and another from LA got on my neck to write the book. So when I started writing I was advised ‘pehle khopadi main pakkao (first cook it in the brain)’, then write it,” he said leaving the audience in splits.

Though writing about his father and recalling the deepest of the memories wasn’t easy, he found the process to be cathartic. “Surprisingly, I wrote the first few chapters and the rest of the book wrote itself,” he shared adding that he felt his father’s presence guiding him through the process. And after the publisher liked the first few chapters, it sort of became mandatory for him to finish the book.

Recalling how he always found a friend in his father, Parikshat shares that he had his first cigarette and beer with him and advised him not to do anything behind his back.

Adding smilingly, “Also asked me not to call him dad. I discussed anything with him without any hesitation. He never raised his voice. He just said learn to live and live to learn.”

The book — which took a year to write and another to refine —has a foreword by Amitabh Bachchan who read it for the audience at the launch. The Sholay actor has admired Balraj Sahni for his simplicity and effortless  portrayal as an actor even before the former stepped into the industry.

“Even a person walking on the street would say, ‘Jaise unhon nay bola, vahe sahi hai (The way he said, is correct)’. And that is a great compliment for an actor because not everybody gets to hear such praiseworthy words from a common man,” said Bachchan.

Talking about the prowess of his father’s acting, Parikshat revealed that his father was a very sensitive man who excessively exercised his emotional memory for any role. For that matter, his role in Garam Hawa — of a father whose daughter commits suicide — Balraj Sahni drew the emotion from his daughter Shabnam’s demise.

Narrating an incident he said, “We were shooting for a film where the script demanded my character to spit of his face. Re-takes after re-takes, I kept spitting on the floor. Finally, he called me and asked me to spit on his face, which I eventually had to.”

However, Parikshat got emotional reading the last chapter that talks about his father’s last day, something that he didn’t want to include in the book. “It took a toll on me writing about his last days, and I felt bad writing that chapter. But I was told it is very important, so I should let it be,” he concluded.