Hyderabad, the fourth most-populous metropolitan city in India as per the Wikipedia, ranks fourth in fitness habits of its dwellers. 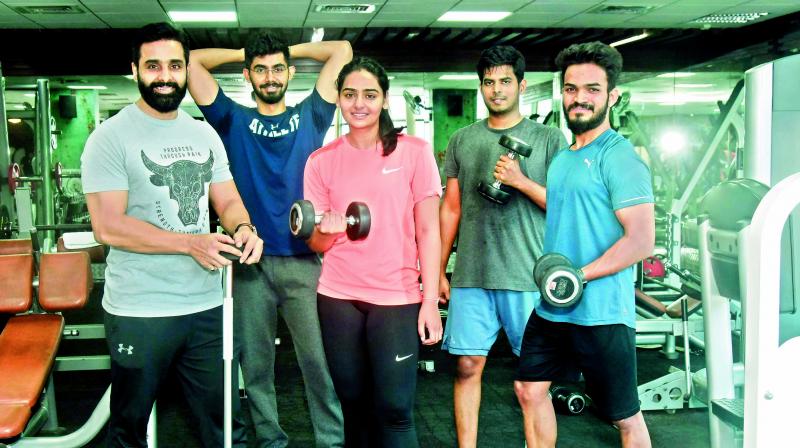 It’s not a herd mentality — where everyone jumps on a trend to be seen as a part of it. For Hyderabadis, being fit and healthy is top priority now — a regular fitness routine has become a part of their daily life.

For actress and fitness enthusiast Rakul Preet Singh, who has several videos of her gym workout sessions doing the rounds on the Internet, fitness became a part of her life since her childhood.

“Being an army kid, I was exposed to a lot of sports and outdoor activities. After I started playing golf, eventually modelling and the film industry took over, but working out has remained an essential part of my daily routine,” says Rakul, adding that besides an hour-long session of workout for six days in a week, she also likes to “shock” her system with high-intensity workouts.

But Rakul isn’t surprised with the fitness trend around her too. “The shift from eating junk to getting fit has been evident for the past five years, with people getting more aware of healthy living. Health is now a bigger picture in Hyderabad than it used to be; it is about the right energy level and improving immunity and the tolerance to pollution. Moreover, it adds well that the city has many resources available for the citizens to adopt fitness as their lifestyle and to lead a healthy life,” she says, adding, “If my workout videos change at least one’s outlook also, those posts are worth it.”

Rishitha, a team leader at an MNC, is one among those who follows actor Rakul’s workout videos besides actors Samantha and Pragya’s.

Her main reason for joining a gym was to maintain her fitness and health and also to begin a disciplined routine.

“I noticed that a well-planned routine helps in creating a perfect and longer-lasting lifestyle change,” she opines. She sets aside a budget of `7,000 for four months excluding her post-workout diet. Sharing her routine, she adds, “I choose to work out in the evening slot after office hours so that I can focus on my diet and sleeping hours. I also have fitness apps that help me with the little things, such as reminding me to drink water, walking while I am talking on the phone, etc.”

Waking up to discipline
Sharath Tata, a graphic designer at a start-up, says he started believing that waking up early makes the day perfect. “While I always felt I lacked discipline, the good-old traditional quote ‘Waking up early is healthy and turns you productive and punctual’ helped me. I took on a 100-day walking challenge and when that ended, I joined the gym. The difference in my lifestyle and health routine were perceptible,” chips in Sharath. He feels the increasing number of fitness centres in the city shows that this generation is quite sensitive about health and fitness thanks to their awareness on the topic. “Also, the possibility of flexi-working hours, start-up culture and work-from-home policies make it easier for more people to dedicate time to their health and working out in the gym,” he adds.

Walking into wellbeing
Talla Bhasker, who owns a fitness centre in the city with an approximate strength of 500 members in it, is not surprised that the city ranks fourth with regard to fitness. “Being health-conscious and making gym, yoga, exercise, workouts a lifestyle need have always been important. But the increase in the number of fitness centres and more trends showing up in the city are only natural given the increase in health issues here, all of which are triggered by nine-hour workshifts, reduced bodily movements, increased intake of junk food and irregular food habits,” he says. In his gym, Bhasker notes that while the youngsters usually skip their sessions, those in their 30s and above take fitness seriously. While members come in to train for their own reasons including fitness, bodybuilding and health issues, according to him, most prefer time slots either between 6 and 10 in the morning or 5 and 8.30 in the evening.