Karnataka minister’s son’s car kills two persons; Was he at the wheel? 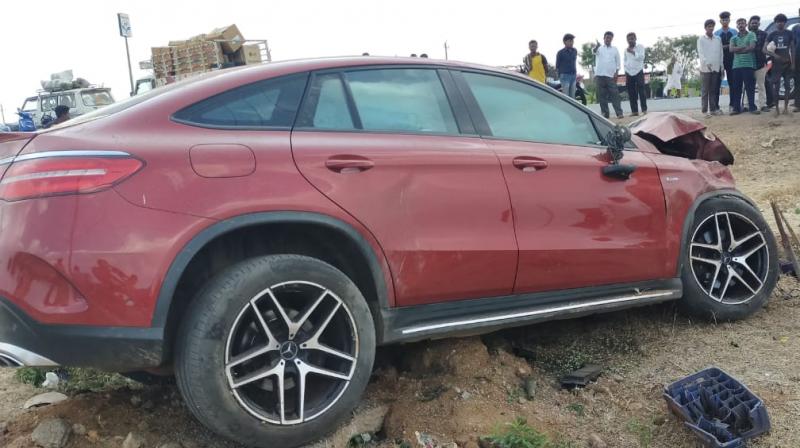 Did the Karnataka cops cover up the minister's son's role in the accident?

Bengaluru: A car in which Karnataka revenue minister R Ashok’s son Sharath was allegedly travelling was involved in an accident on Monday, and allegations arose Thursday that he was at the wheel and that the police did not include his name in the case details.

Two people died in the accident: a ninth standard student identified as Mariyammanahalli resident Ravi Naik, and a friend of Sharath named Sachin, who was travelling in the car.

Three others in the car, identified as Rakesh, Shivakumar and Rahul, were injured in the incident and were taken to Bengaluru for medical attention.

According to sources, Sharath had been to a resort near Hampi to celebrate his birthday. The celebrants were returning to Bengaluru in a Mercedes Benz (registration number KA 05 MW 0357).

Sources said the car was speeding on National Highway 50 and went out of control at Durga petrol bunk at Mariyammanahalli near Hospet in Bellary district. It ran over a local boy, Ravi Naik, who was drinking tea by the wayside at the time. He died on the spot. Sharath’s friend Sachin who was in the seat beside the driver also succumbed to injuries.

Policemen who went to record the case allegedly left out the name of the minister’s son from the details. Instead they allegedly recorded that another person named Rahul was driving the car. The names of all the others in the car, all friends of Sharath, were recorded in the FIR but not Sharath’s.

When the registration number of the car was traced, it was found to be registered in the name of a reputed educational institute whose franchise is held by the minister, according to sources.

Minister Ashok, however, maintained that “there is no connection between us and the car which met with the accident.”

Asked specifically whether his son was in the car, Ashok answered that since an investigation was going on, he would not make any statement at this point.

"There are two deaths in the incident. One pedestrian and another boy in the car have lost their lives. The local people shifted them to hospital and an FIR was booked on the same day," he said.

He did concede, “The law is equal for all.”

Bellary superintendent of police C K Baba said R Ashok's son was not there in the car.

However, the hospital authorities in Hospet taluq hospital said they were told that Sachin, the deceased person, was known to minister Ashok. His post-mortem was conducted late that night and the body was sent to Bengaluru.

Home minister Basavaraj Bommai said he would get the details and then react to the incident.

The Congress party took to Twitter to allege a hush-up. Without taking names, it said the minister’s son was behind the incident.

The case mirrors almost exactly another accident that happened in Bengaluru involving a politician’s son. A car in which Congress MLA SA Harris’s son Mohammed Nalapad spun out of control and injured four people on Frebruary 9. Although bystanders said the young man was driving the car, another man, allegedly a proxy, surrendered, claiming to have been at the wheel at the time of the accident.

Centre directs states to act against those hoadring essential commodities