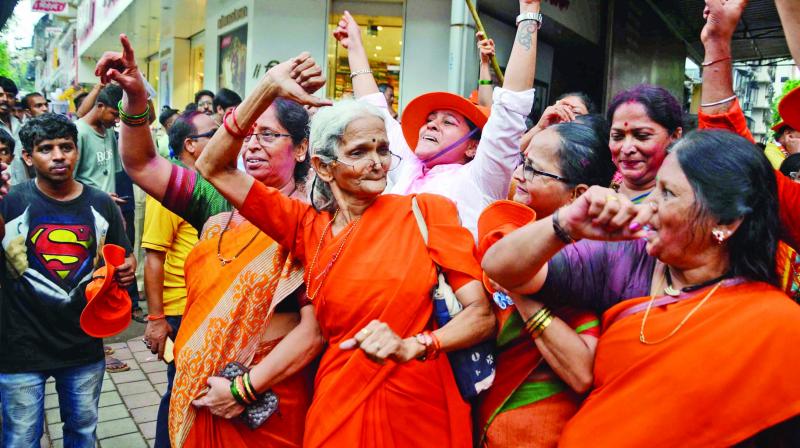 New Delhi: Taking the voters for granted did not work for the BJP this time. The slogan, “Ab ki baar 75 paar” about the 90 seats in Haryana and 220-plus target of 228 Assembly berths in Maharashtra fell by the wayside.

The BJP, which brazenly ignored local issues, refused to address economic slow down, unemployment and stuck instead to contentious national issues — abrogation of Article 370 and the National Register of Citizens (NRC) — was delivered a body blow by voters in both the states.

There are already talks of replacing Punjabi chief minister Manohar Lal Khattar with a Jat face in Haryana.

If Haryana turned into an unmitigated horror show for the BJP with a hung Assembly and six ministers losing the polls, in Maharashtra, despite the NDA’s win, BJP was put on the racks as its ally and bugbear Shiv Sena began talking of a “50-50 deal” for the chief minister’s post.

Despite the poor show in Haryana, the BJP, which was six short of the simple majority of 46 Assembly berths has won the support of four of the seven Independent candidates. Now just two seats short of majority, chief minister Khattar is all set to stake claim to form the government. The party has flown the Independent MLAs to Delhi to “keep them safe” from “poachers”.

The by-polls held in 51 Assembly seats also did not go the BJP way. Even though the BJP held on to 30 Assembly berths, the Congress managed to win 12 and eight went to others. Gujarat, the home turf of both, PM Narendra Modi and home minister Amit Shah, threw up a major surprise with the Congress winning three of the six Assembly by-polls. BJP has won two and was leading in one. Turncoat Alpesh Thakor, who had quit the Congress to join the BJP, lost the bypoll to Radhanpur Assembly seat in Gujarat. Even though the Congress has miles to go, it was celebrating the triumph of the old guard. Despite Congress leader Rahul Gandhi’s open attempts to sideline former chief minister and Jat leader Bhupinder Singh Hooda, the elections in Haryana witnessed the return of the “Hooda factor.”

The Congress’ battle plan — worked out by the campaign committee chief, Mr Hooda, and state unit president Kumari Sheilja — to stick to local issues and play the Jat-Dalit card outwitted the BJP.

Following its poor show, the BJP high command is now worried about the forthcoming polls in Jharkhand at the end of this year and Delhi early next year.

For the Haryana throne, both the BJP and Congress are trying to woo Dushyant Chautala’s JJP and the Independents. The BJP has asked Akali Dal leaders Prakash Singh Badal and Sukhbir Singh Badal to approach the JJP, while the Congress Jat leader, Mr Hooda, is in touch with Mr Chautala. The BJP is ahead in the race with four Independent candidates falling into its coffer.

While the BJP high command went into a huddle after the “shocking” outcome, some saffron functionaries felt that the “sheer arrogance” of the party leaders after the overwhelming victory in the Lok Sabha polls was one of the “major reasons” for the party’s “underwhelming performance”.

In Haryana, two crucial communities, Jats and Dalits, who had voted for Prime Minister Modi during the Lok Sabha polls in 2014 and 2019, deserted the BJP in this Assembly polls. They turned to the Congress and the JJP instead.

The BJP, which has been winning elections solely on the popularity of Mr Modi, had chosen to ignore the caste cauldron in the Haryana which is split between Jats and non-Jats. Mainly an agrarian state, Jats constitute nearly 29 per cent of the state’s population and remain the dominant vote bank. Dalits and Schedule castes constitute about 22 per cent and the rest are Brahimns, Rajputs and Baniyas.

The Jat community felt betrayed when Mr Khattar, a Punjabi, was made the state’s chief minister. While the community went with Mr Modi in the 2019 Lok Sabha polls because of the lack of a “credible alternative”, it rejected the “Punjabi” chief minister during the Assembly polls. The Jats consolidated against the BJP as the party went all out to woo the non-Jat communities and unite them behind its first-time MLA and chief minister, Khattar. So harsh was the backlash, that the BJP’s tallest Jat leaders in Haryana — BJP state unit chief Subhash Barala and finance minister Captain Abhimanyu — lost the elections.

As for Dalits, brewing discontent and resentment following the demolition of Ravidas temple in Delhi was one of the main reasons for them to turn against the BJP. The Dalits have also been complaining about the BJP’s “apathy” towards the community.

While the Opposition parties have been screaming about nearly 30 per cent unemployment in the state, Mr Khattar and the BJP refused to address the issue. Local reports indicated that industrial pockets, particularly in Manesar, Gurgaon and Bhiwadi, among others have been severely hit following demonetisation and the subsequent economic slow down.

In Maharashtra, despite the NDA win, the balance of power has shifted from the BJP to Shiv Sena. With just over 100 seats in its kitty, the BJP is no more the big brother. Instead Shiv Sena, with a lead on 57 seats so far, has emerged as the main pillar on which the saffron citadel rests.

The NCP too gained muscle in the state with 53 seats. The Congress has won 44 seats. These numbers have become a major cause of concern for chief minister Devendra Fadnavis. In 2014, the BJP won 122 seats in the state, while Shiv Sena won 63.

In Maharashtra, the BJP took a major hit in both, western Maharashtra and Vidarbha region. While sympathy for Mr Pawar following ED raids on his family played out in the western part of the state, farmers’ distress and the BJP’s failure to address them hit the party hard in the Vidarbha region.

Summing up the BJP story, a senior party leader said that “national issues don’t work in state elections and voters did not respond well to our attempts to make 370 and NRC emotive issues.” Then he quipped, “Also, at the end of the day, it’s economy, stupid.”