India   All India  22 Oct 2021  Many Indians unlikely to be fully vaccinated by year-end despite ample COVID shots
India, All India

Due to the large gap between doses, more than 20cr people can get their 2nd dose only in late Jan even if they all got their 1st shot today 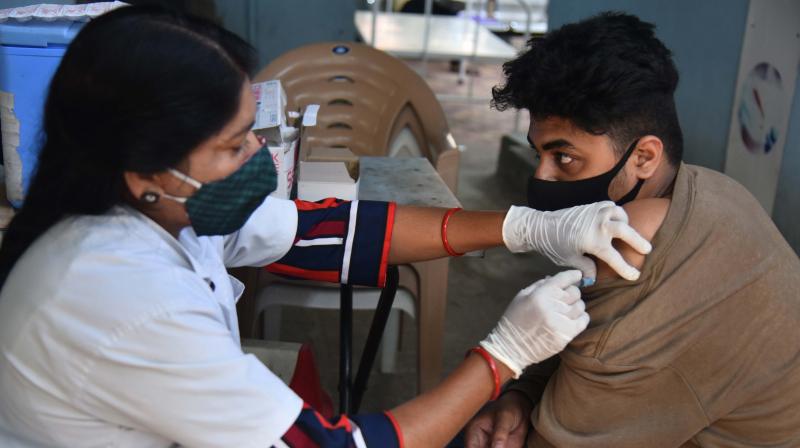 The locally-produced AstraZeneca vaccine which is known as Covishield has a 12 to 16 week gap between doses, in contrast to the 8 to 12 week gap recommended by the World Health Organization. (DC Image/SSR)

Tens of millions of Indian adults are unlikely to be fully vaccinated against COVID-19 by the end of 2021, despite ample supplies, due to an unusually large gap between the doses of the most widely-used vaccine and growing complacency as cases fall.

The locally-produced AstraZeneca vaccine which is known as Covishield has a 12 to 16 week gap between doses, in contrast to the 8 to 12 week gap recommended by the World Health Organization.

Based on current trends, the Covishield dosage gap means more than 20 crore people will be eligible for their second dose only in late January even if all of them were to get their first shot on Friday.

Meanwhile, people are growing increasingly complacent about getting inoculated as infections and deaths have fallen sharply in the past month. The government wants to vaccinate all of the country's 944 million adults by December but some 230 million of them have yet to get even a single dose.

"It is likely that the milestone may be missed by several weeks," said Rajib Dasgupta, head of the Centre of Social Medicine & Community Health at New Delhi’s Jawaharlal Nehru University.

"Reducing Covishield dosage interval is certainly a possibility to consider."

While the health ministry did not respond to requests for comment on Friday, it told Reuters on Monday that its immunisation experts were "actively considering the matter of dose interval between Covishield doses".

NOT A "MAJOR CONCERN"

India's immunisation campaign has slowed this month despite the country amassing record stockpiles of vaccine. It comes as cases have fallen to multi-month lows in India after a record rise in infections and deaths in April and May.

India doubled the dosage interval for Covishield in May when supplies were scarce and because government experts felt a longer duration would provide better protection.

Serum Institute of India, which produces Covishield, has nearly quadrupled its capacity since April and can now produce up to 240 million vaccine doses monthly.

But health experts are not too worried about the fact that many people will not get their second doses in 2021, even though they say it would be safer for the population to be fully inoculated as soon as possible.

A government study in July estimated that more than two-thirds of Indians already had COVID-fighting antibodies, mainly through natural infection. That gave them substantial protection even with one dose, unless more infectious variants emerge.

Not achieving full vaccination by December "will not be of any major consequence as recent serosurveys show a high degree of protection," epidemiologist Dasgupta added.

About 75% of India's adult population have received at least one COVID-19 dose, while 31% are fully vaccinated, according to government data. Only people aged 18 and above can currently be vaccinated in India.

"At least one dose we should be able to give to most of the adults by the end of the year," N.K. Arora, who leads a government group on immunisations, told a news channel late on Thursday. "Within the next 4-6 weeks after that, second doses will also be given."