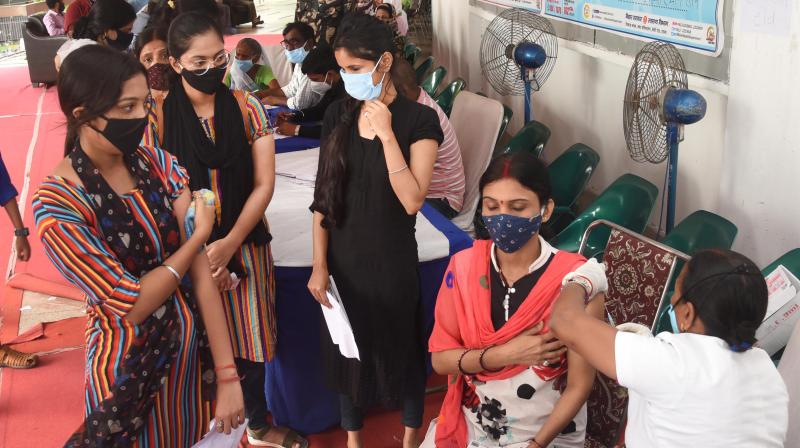 A health worker administers a dose of COVID-19 vaccine to a beneficiary at State Government-run at SKM Hall in Patna. (Photo: PTI/File)

New Delhi: India achieved a major milestone in its vaccination programme against COVID-19 as the cumulative vaccine doses administered in the country surpassed the 100-crore mark on Thursday.

The prime minister also visited the Ram Manohar Lohia Hospital here after the milestone was achieved and interacted with hospital officials.

He was accompanied by Health Minister Mansukh Mandaviya.

In a tweet, Mandaviya congratulated the country on achieving the feat, and said it was the result of the able leadership of Prime Minister Modi, whom he described as a visionary.

Congratulating the country for the vaccination landmark, Dr Poonam Khetrapal Singh, Regional Director, WHO, South-East Asia, said it was not possible without strong political leadership.

"Huge congratulations to India for marking yet another milestone- a billion COVID-19 vaccine doses administered. This extraordinary feat in a short span was not possible without strong leadership, inter-sectoral convergence, dedicated efforts of the entire health and frontline workforce and the people themselves," she said.

India's progress must be viewed in the context of the country's commendable commitment and efforts to ensure that these life-saving vaccines are accessible globally, she said.

According to official sources, over 75 per cent of India's all eligible adult population has been administered at least the first dose and around 31 per cent has received both the doses of the vaccine.

India took 85 days to touch the 10-crore vaccination mark, 45 more days to cross the 20-crore mark and 29 more days to reach the 30-crore mark, according to the Union Health Ministry data.

The country took 24 days to reach the 40-crore mark from 30-crore doses and then 20 more days to surpass the 50-crore vaccination mark on August 6.It then took 76 days to go past the 100-crore mark.

The top five states which have administered the highest number of doses are Uttar Pradesh followed by Maharashtra, West Bengal, Gujarat and Madhya Pradesh.

To mark the completion of administering of 100 crore COVID-19 vaccine doses, the largest khadi tricolour in the country, weighing around 1,400 kg, will be displayed at the Red Fort on Thursday, official sources said.

The same tricolour with dimensions 225 feet by 150 feet was unfurled on October 2  Gandhi Jayanti  in Leh, they said.

Mandaviya had on Wednesday appealed to all those who are eligible to get inoculated without delay and contribute to the historic vaccination journey of India.

To mark the milestone on the COVID-19 vaccination exercise, a series of events have been lined up. Mandaviya will launch a song by singer Kailash Kher and an audio-visual film at the Red Fort.

"The country is close to making a vaccine century. To be a part of this golden opportunity, I appeal to the citizens who are yet to be vaccinated to contribute to this historic golden vaccination journey of India by getting vaccinated immediately," he had said in a tweet in Hindi.

SpiceJet will unveil a special livery at the Delhi airport to celebrate the 100 crore vaccine milestone on Thursday.

The health minister, Civil Aviation Minister Jyotiraditya Scindia and SpiceJet CMD Ajay Singh will be present on the occasion.

Speaking about the flag, a source said, The same 1,400-kg handwoven khadi tricolour, the largest in the country, which was unfurled in Leh to mark Mahatma Gandhi's 152nd birth anniversary and the 75th year of Independence will also be displayed at the Red Fort to mark the occasion (100 crore doses).

The flag is the largest handwoven and handspun cotton khadi flag ever manufactured in India and it measures 225 feet by 150 feet, the source said

Mandaviya had earlier said that announcements will be made on airplanes, ships, metros and at railway stations when India achieves its target of administering 100 crore doses.

Celebrations will also be held at central government hospitals in the city to mark the occasion.

The countrywide vaccination drive was rolled out on January 16 with health care workers (HCWs) getting inoculated in the first phase. The vaccination of frontline workers (FLWs) started from February 2.

The next phase of COVID-19 vaccination commenced from March 1 for people over 60 years of age and those aged 45 and above with specified co-morbid conditions.

The country launched vaccination for all people aged over 45 years from April 1.

The government then decided to expand its vaccination drive by allowing all above 18 to be vaccinated from May 1.