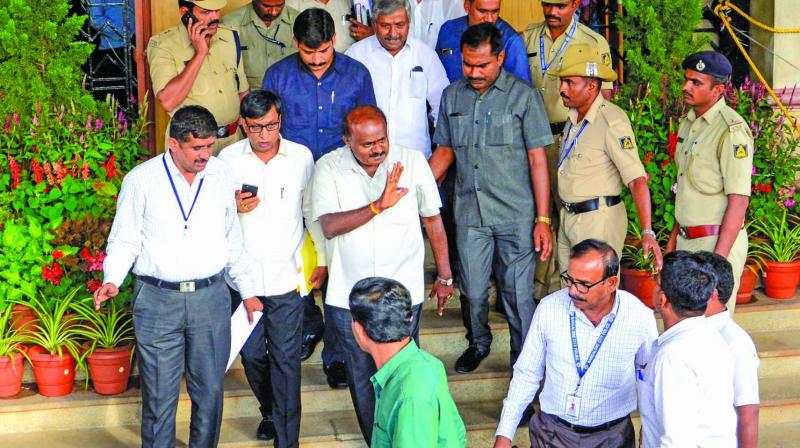 New Delhi/Bengaluru: Six days after Karnataka chief minister H.D. Kumaraswamy announced in the state Assembly that he would be seeking a trust vote to prove that he still had the numbers in the House despite the resignation of 16 Congress and JD(S) legislators, the Janata Dal(S)-Congress coalition government will on Thursday face the biggest challenge of its 14-month tenure after the

Supreme Court ruled that the rebel MLAs cannot be compelled to participate in the proceedings of the Assembly session.

“We make it clear that until further orders, the 15 members of the Assembly ought not to be compelled to participate in the proceedings of the ongoing session of the House and an option should be given to them that they can take part in the proceedings or opt to remain out of the same,” a Supreme Court bench said in its three-page order.

This decision means that any whip issued by the ruling Congress or JD(S) to make the rebels participate in the Assembly proceedings and support the coalition government when the confidence motion is put to vote will not apply to them.

In such a situation, the Opposition BJP, which has the support of 107 MLAs (105 of its own and two Independents), enjoys a clear edge over the JD(S)-Congress coalition, which has seen its numbers fall from 118 to 101 (which includes the Speaker). Of the 16 MLAs who resigned, 13 are from the Congress and three from the JD(S).

Only 15 MLAs approached the Supreme Court seeking an early decision on their resignations, with former home minister Ramalinga Reddy being the lone MLA who did not. In an interesting development, Mr Reddy met the Speaker and withdrew his resignation late on Wednesday, boosting the coalition numbers to 102, amid speculation that both parties had stepped up efforts to woo some of their members back.

Speaker K.R. Ramesh Kumar the freedom to decide on the resignation of the 15 MLAs within a timeframe considered appropriate by him.

The Speaker, on his part, welcomed the court decision. “The Supreme Court has put an extra burden on me, I will conduct myself responsibly in accordance with constitutional principles,” he told reporters in Kolar, his hometown, adding: “My role is like that of an umpire (in a cricket match). If it is a no ball... I will say no ball. It is very difficult to say what will happen on Thursday.”

The rebels MLAs, now camping in Mumbai, hailed the decision and said there was no question of going back on their resignations from the Assembly or attending the session, further diminishing any hope the coalition had of pacifying them and getting them to vote in favour of the confidence motion to be moved by Mr Kumaraswamy. In a video released to the media, rebel

Congress MLA B.C. Patil said: “We are happy with the decision of the Supreme Court, we honour it.”

Flanked by 11 other Congress-JD(S) MLAs who have quit, he said: “We all are together... there is no question of going back (on the resignations).”

In Bengaluru, Opposition leader in the Assembly and “CM in waiting” B.S. Yeddyurappa welcomed the court decision and said it was a moral victory for the rebel MLAs.

But Congress’ chief spokesperson Randeep Surjewala made known the party’s disappointment. “The SC order nullifying the whip and by extension the operation of the Constitution’s 10th Schedule to punish MLAs betraying the public mandate, sets a terrible judicial precedent!” he said in a series of tweets.

“Blanket protection to MLAs, who are driven not by ideology but by far baser concerns, is unheard of,” he added.

Karnataka Pradesh Congress Committee (KPCC) chief Dinesh Gundurao termed it an “extraordinary order”. “The Supreme Court order seems perfectly coordinated to help the rebel MLAs to violate the whip. It has set a wrong precedent as the value of the whip as per 10th Schedule of the Constitution is now redundant. An extraordinary order indeed!,” Mr  Gundurao tweeted.

Sources said embattled CM received  a pep talk from his father and JD(S) supremo H.D. Deve Gowda soon after the court ruling and was told not to give up and to exhaust all options before deciding to step down, if he had to.

Mr Deve Gowda told Mr Kumaraswamy during a one-on-one meeting at his Padmanabha Nagar residence in the city that both national parties (BJP and Congress) were out to finish the JD(S), a regional party, and  thus he should not fall into the trap. According to Mr Deve Gowda, former CM Siddaramaiah and water resources minister D.K. Shivakumar, both leaders of the coalition partner Congress,  played to the gallery instead of trying to help him save the government. Mr Kumaraswamy should therefore not trust Congress leaders at all, let alone going with the BJP, he stressed.

In a related development, Congress Legislature Party leader Siddaramaiah and KPCC president Dinesh Gundurao have sought disqualification of Independent MLA R. Shankar for switching his loyalty from the Congress to the BJP. They said Mr Shankar had become a member of the Congress recently (after which he was made s minister) and he had now extended support to the BJP. The petition was given to the Speaker’s office. If Mr Shankar is disqualified, the BJP numbers will fall from 107 to 106.

The BJP on its part, seems supremely confident of the fall of the Kumaraswamy government with sources confiding that Mr B.S. Yeddyurappa is getting ready to take the oath as CM in all probability on July 21 or 22.

The sources said that since the Finance Bill has to get the nod of the Assembly before July 31, Mr Yeddyurappa will take the oath immediately after the exit of the coalition government. If everything goes as per the BJP’s plan, the party’s state chief will be the only one taking the oath initially before which he is likely to meet the BJP top brass in New Delhi.

The coalition partners JD(S) and Congress are however in no mood to give up and are exploring ways to prolong the debate on the vote of confidence which would come up in the Assembly on Thursday. The coalition leaders are likely to insist on a long debate and make it continue till Monday, so that they get enough time to make a last-ditch attempt to convince the rebel MLAs to come to their rescue and vote for the government when the confidence motion is put to vote.

One of the leaders of the coalition, PWD minister H.D. Revanna, who has been blamed by the rebel MLAs for his undue interference in matters concerning their ministries and constituencies, tried to set the record straight denying that he had poked his nose in any administration-related issues. Mr Revanna is the brother of chief minister H.D. Kumaraswamy.