H.K Kumaraswamy says there are no permanent friends or enemies in politics. 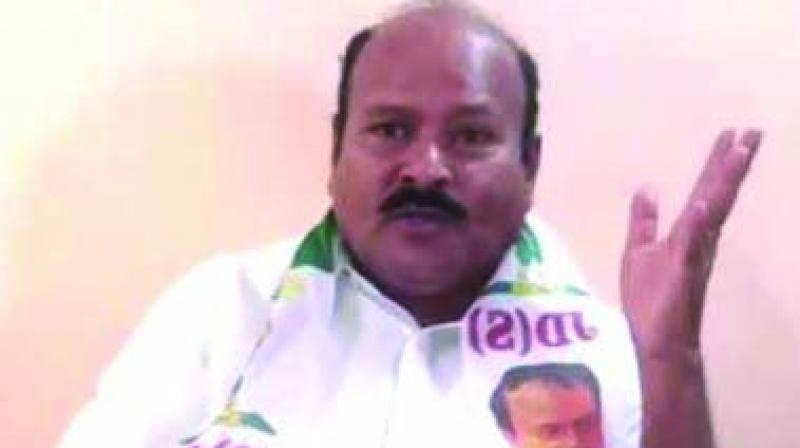 Bengaluru: It’s official. The Janata Dal (Secular) is open to supporting the BJP government in the state, should it fall short of numbers after the December bypolls.

Confirming rumours about the JD(S)’s softening stance on the saffron party, which dislodged it from power only a few months ago, its state president, H.K. Kumaraswamy said that there were no permanent friends or enemies in politics and it was open to offering outside support to the BJP government should it ask for it only because it wanted to save the state from going in for snap polls. Excerpts from the interview :

Q. There are strong rumours that your party may extend outside support to the BJP government if it fails to get the numbers it needs after the coming byelections.
A. In politics, there are no permanent friends or enemies and nobody is untouchable. Our party had a coalition government with the BJP in 2006. The bypolls are being held for 15 seats, and the BJP has to win at least eight to keep the government afloat. The JD(S) is ready to extend it support from outside or to be a part of it in case the offer comes from the BJP. That may happen only after the bypoll results are announced. The reason why the JD(S) wants to extend  outside support to the current government is simple. No MLA, be it Congress, JD(S) or BJP, wants a snap poll.

Q. Is it true that your national president, H.D. Deve Gowda had a secret meeting with the BJP’s national leaders?
A. Let me clarify that Deve Gowdaji never hides anything. He met Prime minister Narendra Modi recently for other issues and did not discuss politics at all. He has also spoken to Chief Minister B S Yediyurappa to discuss certain state issues but not politics. As usual, the media interpreted this to mean that the JD(S) would come back to power soon.

Q. Why was senior MLC, Puttanna expelled from your party and will the same yardstick apply to miffed MLA, G.T. Deve Gowda and others?
A. MLC Puttanna was expelled from the party for his anti-party activities. We came to know that he was the man behind the Operation Kamala to poach three of our MLAs. After getting sufficient evidence, the party decided to expel him. We will not hesitate to take similar action against others who indulge in anti-party activities.

Q: Why was the Malaysia trip for your party legislators cancelled? Was it because some of them decided not to go?
A: It's nothing to do with that.  Mr Kumaraswamy thought it was not the right time to go on a foreign tour when several districts in north Karnataka are still recovering from the floods. The Malaysia tour was cancelled only for this reason.

Q : But there seems to be a lot of dissatisfaction among the legislators.
A : Like other political parties, we too have some issues. There is dissatisfaction among our MLAs, but no dissension. Has any MLA said that he/she is quitting the party?  All talk that around 20 MLAs plan to join the BJP is false and baseless. Some of them may have given statements against the party leadership, but have they said they will quit?   This problem is there in the Congress and BJP too. I am confident that none of our legislators will join either party.

Q: But your senior party MLC, Basavaraja Horatti is threatening to leave the party along with 10 or 12 other legislators and join the BJP.
A:  It is no secret that Mr Horatti had been dissatisfied for sometime, but he has never spoken of leaving the JD(S). He had a strained relationship with former Chief Minister, H D Kumaraswamy which is being  addressed by our party supremo, Deve Gowda who has convened a meeting of all the MLCS next week to thrash out their issues. No dissatisfied MLA has met him, Kumaraswamy or me. We are planning to hold a JDLP meeting this month to have a free and a frank discussion.

Q: Is it surprising that even loyalists like MLC, Saravana and  disqualified MLA, N Gopalaiah are rebelling against Mr Deve Gowda and his sons?
A: Certainly. The party made a mistake in making people like Saravana  members of the legislative council without going into their merits. Saravana was so loyal to Deve  Gowda that he started the Appaji Canteen to counter the Indira canteen started by the Siddaramaiah government. Gopalaiah too prostrated before Deve Gowda whenever he met him. Later, we came to know that it was a big show. Such drama in public is not required if you are loyal.  Sometimes too much obedience is dangerous, especially in politics. We understood this after seeing the way Saravana and Gopalaiah  behaved.