Karnataka on boil over hijab, schools, colleges given 3-day holiday 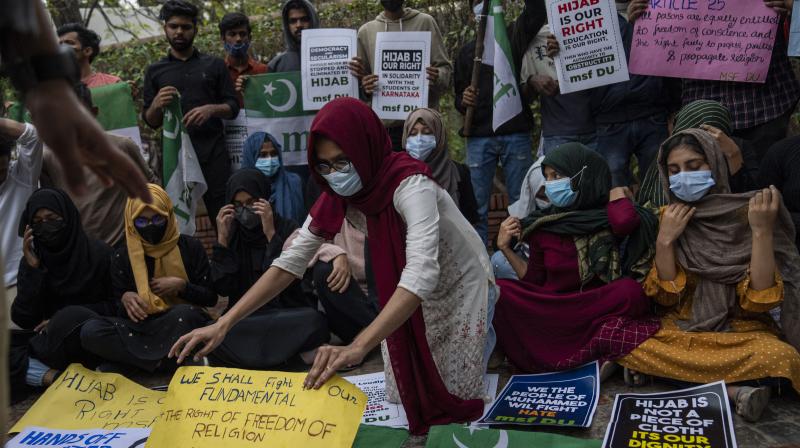 Muslim students hold placards as they shout slogans during a protest against banning Muslim girls wearing hijab from attending classes at some schools in Karnataka, in New Delhi, Feb. 8, 2022. (AP/Altaf Qadri)

Bengaluru: The hijab-row triggered protests in Karnataka spread across the state on Tuesday, with campuses witnessing ‘conflict-like’ situations marked by stone-pelting incidents, use of force by police and the Muslim girls standing their ground for wearing the headscarves, prompting calls for peace and calm both by the government and the High Court, which is now looking into the students' plea for their right to their hijab.

As the issue snowballed into a major controversy, the government declared three days holidays for educational institutions across the state, even as voices across the country came in for and against the hijab issue.

Karnataka Chief Minister Basavaraj Bommai said: “I appeal to all the students, teachers and management of schools and colleges as well as people of Karnataka to maintain peace and harmony.”

Meanwhile, the Karnataka High Court also appealed to the students and people to maintain peace and tranquility and said only some mischievous people were keeping the issue burning.