BS Yediyurappa wants to leave a rich legacy behind

Yediyurappa denied that aid for flood relief was inadequate. 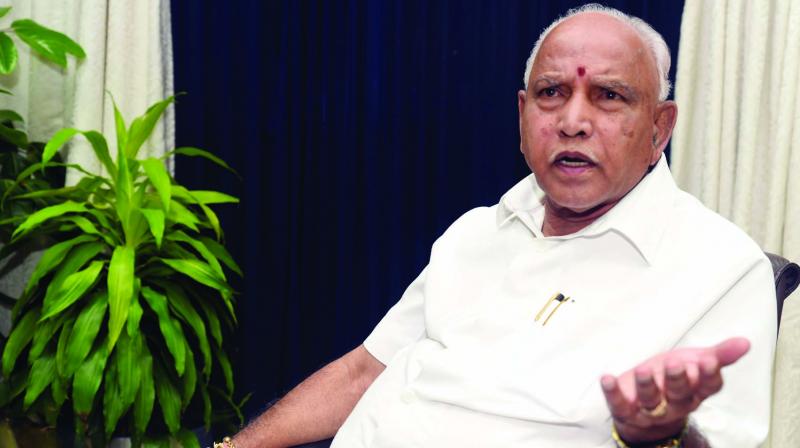 Karnataka chief minister B.S. Yediyurappa during an interview on his government completing 100 days in Bengaluru on Saturday. (Photo: Asian Age)

Bengaluru: When B.S. Yediyurappa looks back on the last 100 days that he has just completed as  chief minister in his record fourth stint in the hot seat,  the consummate Karnataka politician who has seen off rivals, both within and outside his party in his tumultuous career, must know that this time, it is his legacy that is at stake.

Except, once again he’s in the eye of a storm of his own making, caught on tape, implying that he had BJP president Amit Shah’s active blessing in sequestering the 15 rebel Congress and Janata Dal(S) MLAs in a Mumbai hotel, and ensuring their defection to bring down the JD(S)-Congress government in Karnataka.

In an interview at his crowded home office ‘Krishna’ to mark the 100 day milestone, the Shiva-mogga strongman shrug-ged off the charges that former Congress chief minister and opposition leader Siddaramaiah had levelled against him and Mr Shah, charges that Mr Siddaramaiah has taken to Karnataka Governor Vajubhai Vala on Satu-rday, by saying that he didn’t wish to comment on it.

“It’s not correct for me to speak about this,” the CM said, dismissively.

He was equally cagey about questions on whet-her the 15 rebels would be given BJP tickets to fight the bypolls, or whether he would give in to pressure from within the BJP to field party candidates.

“I don’t know for how many constituencies, the Supreme Court will order bypolls, on December 5. Only after the SC decision next week, which is expected by November 4 or November 5, will we get a clear picture.”

His confidence in being able to carry the day and win enough seats to give the BJP the 113 seats it needs for a majority in the 224 seat assembly was undimmed. “I have hundred per cent confidence that we will win at least 12 to 13 Assembly seats. We are going to run this government for another three and half years without any hurdle,” he said.

He lashed out at his bête noire Siddaramaiah for a lacklustre 100 days in office. Taking strong exception to Siddaram-aiah making a negative assessment of his government, he said: “Who’s he to say this? In 100 days when unprecedented floo-ds hit the state, how can we achieve everything in this short span of time?”

Making it even more interesting was the support he has received from another political opponent, former chief minister H.D. Kumaraswamy, who led the JD(S) government that he toppled, and who offered him support.

Asked if he would take up the offer of JD(S), BSY, looking tetchy and not entirely happy at even the idea of allying with a man with whom he had a grand falling out in 2007, said, “There is no question of taking JD(S) support. After by-elections results, after December 12, our strength will increase to 113. In such a situation there is no question of taking support of JD(S). I welcome Kumaraswamy’s statement that he will not destabilise the government that is busy in flood relief works.”

He also strongly denied that central aid for flood relief was inadequate. “Which other state got this much money? Tell me. They are helping us. I am confident we will get more in the coming days,” he said.

Mr Yediyurappa, who recently reshuffled his chief minister’s office, admitted that he would like to leave behind a rich legacy and to achieve this, he needed a battery of good and dynamic officers.

Curiously, he also clarified that “Mr Kumaraswamy’s appreciation of our government is no way connected with IMA or phone tapping case where Mr. Kumaraswamy faces charges,” scotching speculation that a quid pro quo was in the offing.

He also dismissed speculation that he was being micro-managed by the BJP central leadership which had clipped his wings, and that he had differences with BJP leaders like B.L. Santhosh and state chief Nalin Kumar Kateel.

“It is totally false. Party state president Nalin Kumar Kateel and I are working together to strengthen the party. We will conduct a joint tour. We have the confidence of central leadership and ministers representing Karnataka. We are working together. These are just rumours, spread intentionally by a section of leaders and the media.”

Talking of taking a leaf out of PM Modi's book he said, “I know how Modi (Prime Minister Narendra Modi) works. That’s why you might have observed, I changed some officials in my office because of some issues. I want to draft good officials to important posts. I know I will do it.”

In a few days, the government will come out with the works done by various departments. He said, “Then, you will see what we have done, how much money we deposited in people’s accounts flood affected areas.” He praised his ministers including Govind Karjol and S. Suresh Kumar who are working tirelessly in flood-hit areas.

His next focus would be transforming the IT capital into the most envied city in the country. "We are preparing a road map that will transform the city into a hub of development and give a huge boost to infrastructure and industry. We will discuss these next week and come out with a detailed road map. Once we have tackled the flood situation to our satisfaction, Bengaluru development is my next big challenge in the next 100 days,” he said.