At least 1,500 police personnel were deployed in the area, but they were heavily out numbered, and were left powerless. 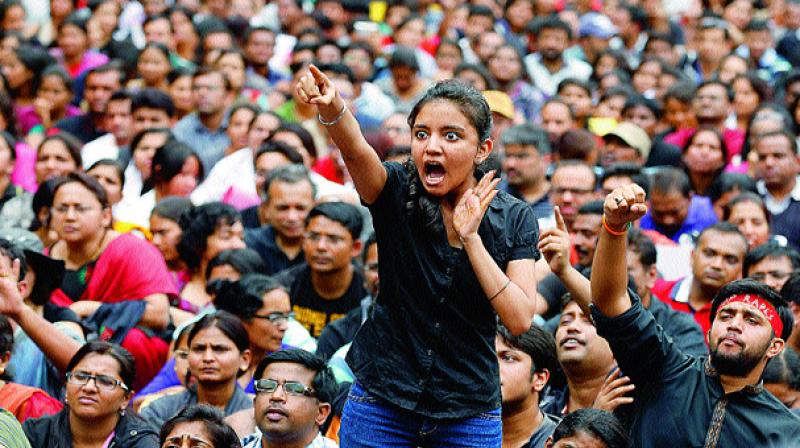 Bengaluru: In a major embarrassment to the city authorities, drunken hooligans posing as revellers ran riot at Bengaluru's MG Road and Brigade Road, molesting and harassing women who had assembled to usher in the New Year.

According to reports, the city police had deployed at least 1,500 police personnel in the area in anticipation of the huge turn out for New Year celebrations. But they were heavily out numbered and left powerless, even as women came running to them with stilettos in hand, in an attempt to flee the pawing and abusive men who went on a rampage.

As the clock inched towards midnight, miscreants, emboldened by alcohol and the anonymity offered by large crowds, began passing lewd remarks at women, and went on to harass, molest and jostle against them.

Recounting her experience, a female police officer who was deployed in the area, revealed that she had to chase away a group of men who were trying to strip an inebriated woman in public. “It is very disturbing to see women caught in such helpless situation,” she added.

The cops were forced to pick and choose cases ‘depending on the gravity of the situation’, the report claimed, adding that in many cases, men harassing women in groups returned to the same spot despite being chased away several times.

“I went and asked one of the cops deployed on the streets to go to the aid of two women being accosted by a group of youth on MG Road. He went and chased them but they were back to the spot in a couple of minutes. There was nothing much they could do as the group was back and the women were also in the same crowd,” said one of those who was present at MG Road.

But the city police officials claim that not a single molestation case has been filed by anyone. Nagendra Kumar, deputy commissioner of police, said, “We got around 450 calls at the city control room when on Saturday night, especially after 10 pm till wee hours in the morning, and not even one was about women being assaulted or molested.”

Some police officers said that the decision to extend the New Year celebrations till 2 am added to the problem.