A city-based scientist shares his five decades long affair with vinyl and music. 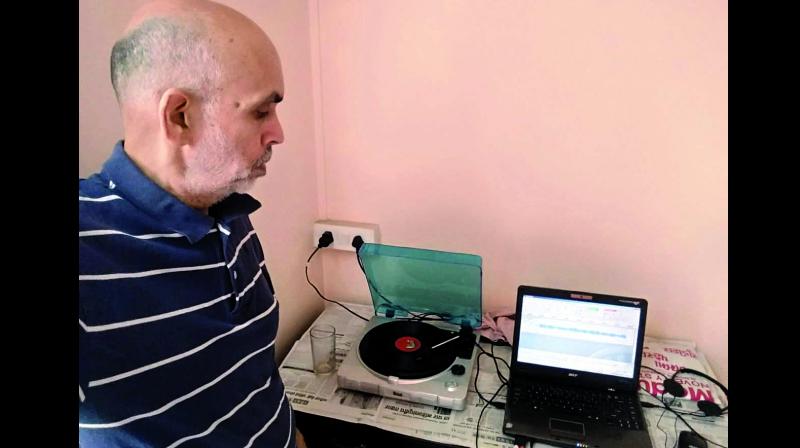 Chandvankar busy at his work station

At the time when radio was booming in India, the desire of listening to a specific song came with a cost of owning a record, given if you could afford the gramophone. “In the ’50s and ’60s, for music lover, the only place for music was radio and the songs played were completely dependent on the broadcasters, not what you would want to listen. For that, you should have your own copy,” reminisces Dr. Suresh Chandvankar, one of the few passionate collectors of vinyl in India.

For someone who started collecting vinyl as a schoolboy since the ’50s, Chandvankar’s collection now ranges up to 25,000 records, which ultimately forced him to buy another house in Badlapur for storing them. “My first record was of 1951 Marathi film Amar Bhoopali in which there was a very famous song, Ghan Shyam Sundra. It was one of my first favourites, and I remember listening to it on a loop,” smiles the connoisseur who is also an editor at the Society of Indian Record Collectors.

But now at the age of 70, Chandvankar – a retired physicist from Tata Institute of Fundamental Research – is keen on passing this passion on to the next generation. “For me, the time has come to educate young people and to tell them what this passion is all about, and how it could be rewarding,” says the collector who will be narrating his journey at Junoon’s Mumbai Local today.

Right from illustrating examples of other collectors and their passion, the need for preservation of these records, their digitisation, the various global archives, to understanding the importance of owning a physical copy of the song and showing a glimpse of his Badlapur house, Chandvankar will cover a wide range of topics.

However, one of the most important questions that the physicist raises is why should we preserve the original? “To keep the piece of heritage alive,” he replies. According to the music aficionado, despite the increased digitisation of music with various online music platforms, the fate of music on such platforms remains volatile. “Suddenly, if something happens and everything washes out, you will have nothing to show. There is a need, just like books. You preserve the copy of the book no matter how old it is or gets digital,” he adds.

But, he maintains that while an expert can get into the nitty-gritty of the frequencies, pitches and sound differences between the two formats, for him, the attachment to the song matters. “Different people look at artefacts in different ways. Some want to listen, some want to see the photograph or painting or someone may be interested in the history of how the records are made. My idea was to look at why people collect and what goes on in their mind, and where is this passion was going,” says Chandvankar, whose shining gem from his treasure is a 1902 record of a Gauhar Jaan song.

While the talk will also include him sharing some of the most amusing stories, historical and cultural developments of the records, Chandvankar towards the end of the talk will be playing a 1970 song, Namrata Kay Samrat, written by Mahatma Gandhi. “This is basically a letter written by Gandhiji, and as per the disc label, the music was given by Vasant Rao Desai in late ’60s and sung by Manna Dey,” he shares.

Revealing another interesting story behind one of the records, Chandvankar delves about a gold record with singer Kesarbai Kerkar’s song, which is currently floating in the outer space. “The Voyager 1 spacecraft was launched on September 5, 1977, the same month she passed away, and carried a gold-coated copper phonograph record with samples of her voice. Now, if the aliens find it, they will listen to only one song of Kesarbai,” he laughs.

Though he agrees that no matter what the medium is, the music will remain the same, only the effect of it on the generation will vary. “If you listen to the original Pyaar Hua Ikrar Hua by Lata Mangeshkar and all the remixes, you will see for yourself that as you advance in age, the same song appears to your ear differently,” he concludes.
—Today, 5 pm onwards, At MCubed Library, Bandra (W)