How AI and humans can work together

Artificial intelligence must enhance the quality of an individual’s life and efficiency of public services. 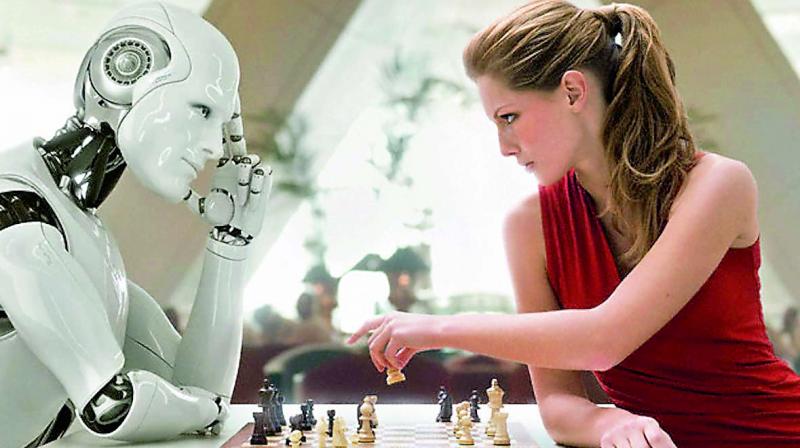 AI has been successfully deployed in the non-trivial healthcare solutions.

Imagine a disco ball suspended in front of us all creating myriad spots of light on the walls of an auditorium that we are sitting in. If the auditorium is our society, the core of the disco ball is artificial intelligence — popularly known as AI. Illuminate a dimension of it and get lost within the heaven it shows you. Why is it then that people have started thinking that enjoying this heavenly beauty may lead us to hell? When stalwarts who have been involved in the evolution of this ball begin worrying, naturally a common person like myself feels like worrying, and therein begins my quest to explore AI, a term coined by John McCarthy in 1956.

In 1948, a seed of several science fictions became reality with the efforts of John von Neumann, and the Church-Turing thesis: creating a machine for what you want it to do if you specify your wish precisely. People wanted an assistant to do the things that were too difficult for humans.

In 1959, Alan Turing proposed the famous Turing test: If a machine can fool a human interrogator and prove its intelligence. Slowly, a definition of AI came to entail making a machine do what humans do better. Obviously, what we call AI kept on changing. MIT’s AI lab, semantic nets and machine translations were early efforts. Chess, checkers and poker-playing programmes analysed champions’ games and learnt to defeat them. Today’s news is that Google’s AlphaGo Zero — the latest evolution of AlphaGo, the first program to defeat a world champion at the ancient Chinese game of Go — learnt chess in only four hours by playing with itself, i.e. without “watching” the human’s game.

Today’s AI is about data science and self-learning systems. The threat is that such systems may evolve into displaying unintended behaviour. Luckily, some decision-makers are firm believers in the existence of “existential risk”. What they say is that you would want somebody close to the power plug to cut the supply the moment you confirm a catastrophe. The funding for AI projects, however, needs to continue. It is too early to regulate AI research.

What is closer to the heart of the aam adami is weak AI, which includes the personal assistant SIRI, Google’s search algorithm, and AI for eradicating war, disease and poverty. We need trained HR to instruct the machines precisely.

However, we will require more people in the fields of art, planning and cross-domain thinking. We require trained social workers interfacing AI-fuelled facilities for public welfare. We need AI workers to generate reliable data from crowd sources when we look forward to AI for urban computing.

AI has been successfully deployed in the non-trivial healthcare solutions. Prediction of medication requirement by civilians and the military, proactive drug discovery and effective distribution policies and a real-time surveillance system for patients are a few examples of this.

The purpose of AI has never been to replace human experts. Where do we stand? According to a survey, 70 per cent of India’s 30,000 AI professionals have five to 10 years’ experienced. We form six per cent of global AI companies, mostly experts in banking and finance. Start-ups are seen in quantity dominating domains such as analysing legal contracts, public safety and selection processes in e-governance and personalised solutions for day-to-day healthcare activities and paying bills. They are seen in quality enhancing domains including consumer services. Policymaking for open data is the need of the hour to let them grow successfully.

Though the general impression is that India is good for experimentation and not an attractive market, brain-drained talents are returning to the country. IT giants are showing interest in developing AI research in India. IIT, DU and BITS Pilani have AI projects. The University of Mumbai in close collaboration with the Government of Maharashtra and with generous donations by the Wadhavanis is set to come up with India’s first Institute of AI. It’s not easy though. Soon India will have a nation-wide quality training and research programme in AI.

(The author is the head of department, Computer Science at the University of Mumbai)