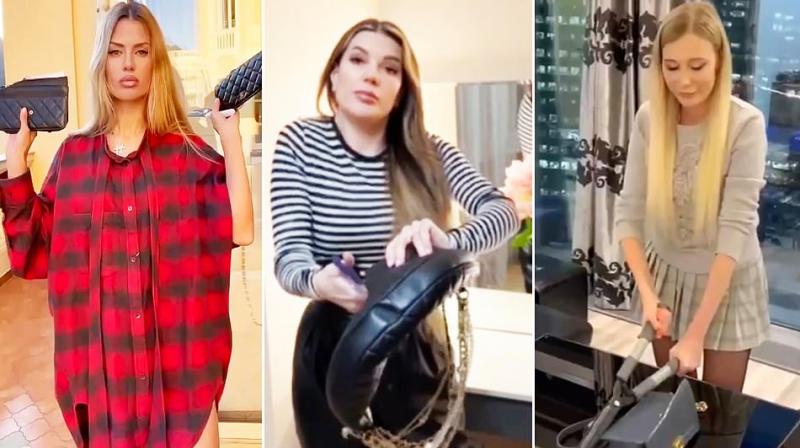 Influencers, wealthy Russian socialites and an Olympian's wife are among the wealthy women outraged that luxury fashion brand Chanel will no longer let them buy their items amid Russian sanctions.

In the recent video, Russian model Victoria Bonya, who has more than 9 million Instagram followers, uploaded a video of her destroying a Chanel bag. "Never seen any brand acting so disrespectful toward their clients," she wrote in the accompanying caption. DJ Katya Guseva, 39, with 587,000 followers, posted: 'I am saying 'No' to Chanel. "They are forcing me to sign a humiliating document, forcing me to reject my Motherland in favour of their brand. I am against Russophobia and against segregation by nationality."

Chanel says it is just complying with European Union (EU) sanctions, which ban the sale to Russia of luxury goods priced at more than €300 ($327; £250).

Russians say they have been turned away from Chanel stores around the world. Yana Rudkoskaya, 47, is a Russian actress and producer of a music show,  and more famously the wife of "Czar on Ice" Yevgeny Victorovich Plushenko.

According to reports, Rudkovskaya was frustrated when she wanted to buy Chanel in Paris, and the clerk refused to sell it to her. "For a woman who  has been buying Chanel and wearing Chanel haute couture for more than 20  years and always sitting in the front row of the runway, it's shocking," said Proshenko's wife.

In addition, Rudkovskaya also revealed that she has spent more than 1 million euros (about 6.99 million RMB) with Chanel, so the ban makes her feel "a little humiliated". In a statement, Chanel said it has "rolled out a process to ask clients" shopping abroad or "for whom we do not know the main residency" to confirm that the products they are buying "will not be used in Russia."

Russian singer, influencer and TV personality, Anna Kalashnikova, reported in her post about what she would be told by a Chanel salesperson that she couldn’t sell her their products because they knew she would take them to Russia.

With sanctions being imposed on Moscow, the luxury brand pulled out of Russia in protest at Vladimir Putin ’s invasion of Ukraine. Russian interior designer and influencer Liza Litvin took to social media to describe how she was refused a Chanel bag in a top Dubai mall. "I went to a Chanel boutique in the Mall of the Emirates,” she posted in fury. "They didn’t sell me the bag because (attention!) I am from Russia!!!”"

Snezhanna Georgieva, 46, wife of billionaire Artem Zuev who owns a winery in Crimea, indicated that there were ways to pull strings and get round the ban.

“I will love it when these brands are back,” she said. “But we know some boutiques that are still open when a regular customer calls them.”