The anti-Hindi sentiment has for decades been strong among Karnataka’s neighbours, most notably Tamil Nadu. 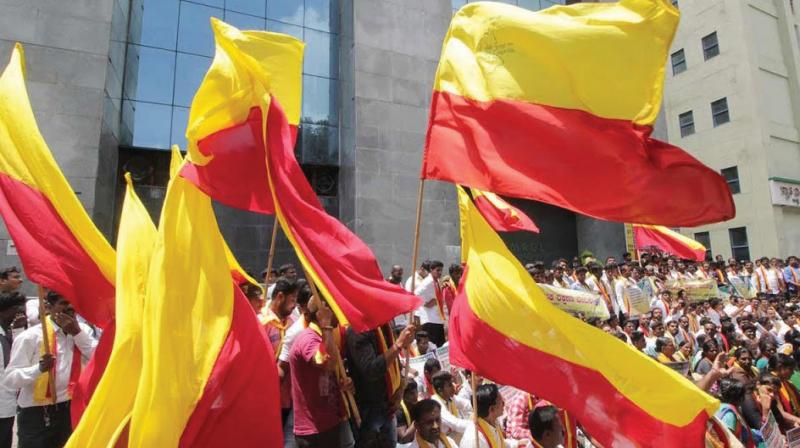 Pro-Kannada organisations took to the streets recently in protest against perceived attempts by the Centre to impose Hindi on Karnataka. Protesters also blackened announcements in Hindi on Namma Metro signages.

Since before Independence, votaries of a unitary idea of India have tried to impose Hindi as the ‘national language’ on all Indians, and votaries of a federalist structure have opposed it, with consequences mostly tilted in favour of the latter. But when a new wave of anti-Hindi protests rises from an unexpected place, it’s time to sit up and re-look at the issue.

A large-hearted writer and teacher espouses a typically Kannadiga view: The anti-Hindi protest in Bengaluru is a storm in a tea cup, don’t over-react. One can love and promote one’s own language without hating another.

Recently, Bengaluru was witness to what could be a game-changer for the city - the completion and opening of the first phase of its much-awaited Metro Rail project. But the music to Bengalureans’ ears was marred by a discordant note that made waves nation-wide -- some organisations and individuals came up with a problem that soon started to look bigger than this solution to the city’s traffic woes: Hindi, they decried, was being imposed on Kannadigas and Karnataka on the sly through Metro signboards!

That was a shock for many people, both in Bengaluru and Karnataka as well as nation-wide, because the country’s cosmopolitan IT capital has never had much of a problem with Hindi as such, although movements to strengthen Kannada and Kannadiga pride have been around and gather steam periodically. It has never been Kannada at the cost of Hindi. Which was why the sudden rise of demands for the state government and the Bengaluru Metro Rail Corporation to stop this “Hindi oppression”, to ensure that Metro signboards are only in Kannada and English, and several instances of actual defacing of Hindi on the boards made national news. It is Namma Metro (Our Metro), not Hamara Metro, the protesters seemed to make clear.

The anti-Hindi sentiment has for decades been strong among Karnataka’s neighbours, most notably Tamil Nadu. Why has it suddenly risen among Kannadigas? Was it triggered by the present dispensation in Delhi, which has made it clear it regards Hindi as the ‘national language’ and wants to push it as such? After all, in March, there was some evidence of this approach in Tamil Nadu, where highway signs suddenly started to appear in Hindi? Or, is Chief Minister Siddaramaiah’s Cong-ress government encouraging pro-Kannada groups to beat the BJP at its own game by raising emotional issues ahead of next year’s elections in the state? The chief minister himself followed up by inventing yet another issue: a separate flag for Karnataka. And for good measure, he dared the state BJP to oppose the idea!

Be the politics of it as it may. I have travelled by Namma Metro a number of times, and I have never felt Hindi overbearing on us Kannadigas. Out of the numerous display boards, only a countable few were in all three languages -- Kannada, English and Hindi; most were only in Kannada and English. All announcements on the trains and at the stations are also only in Kannada and English. Only safety and security announcements, such as “Take care of your belongings” or “stay away from doors” are in all three languages.

When such is the reality, why are we seeing the rise of anti-Hindi protests? Why are those ostensibly fighting to save Kannada so angry over Hindi?

Unlike in Tamil Nadu, where the anti-Hindi agitations have occurred since at least the 1930s, peaking in the 1960s with, and propelling, the rise of the Dravidian parties, a strong movement to save and promote Kannada took root only in the 1980s with the ‘Gokak Chaluvali’. Even then, pro-Kannada was not anti-Hindi.

By the late 1990s, however, Bengaluru saw, with its rise as the country’s IT capital, the influx of large numbers of people from North India and other Hindi-speaking populations. As the migrant population has grown, importing attitudes and behaviours, fear and resentment have taken hold among locals and an ‘Us and them’ narrative can be heard intermittently.

The street-level response to this has been the rise of self-styled “protectors of Kannada” language and culture who, at various times, have gone about forcing shopping malls to play only Kannada songs, threatened cab drivers into speaking only Kannada with their passengers, tearing up posters of Hindi movies, agitating against the absence of Kannada on bus tickets and gas cylinders, and the like. There have also been several instances of auto drivers, many of them affiliated to these pro-Kannada organisations, misbehaving with non-Kannadiga passengers, enraged that these ‘aliens’ come and live in Karnataka, but refuse to learn the local language and adopt the local culture.

There’s, of course, a more civilised way of sending out the “When in Karnataka, be a Kannadiga” message, as it were. Let me tell you an anecdote. During one of those ‘Save Kannada’ agitations, auto driver Shamsuddin had rudely told a passenger to either learn to speak the language or not board his autorickshaw. Shamsuddin told me that the passenger turned back and asked very earnestly, “What should I do to learn Kannada? I don’t see any initiative in Bengaluru to teach non-Kannadigas the language. How do you expect people like me to learn it?” Ever since, Shamsuddin keeps placards in his auto that teach simple Kannada in easy steps. Now, he gently persuades his non-Kannada speaking customers to learn during the ride just enough of the language to get by daily using his placards. He converses with them in Kannada and teaches them a few simple words and lines. As they get down, he requests them to, in turn, teach the language to their friends.

Shamsuddin understands a profound truth: a language can be taught and promoted through love and friendship, not by forcing it on someone. He says one doesn’t need to oppose or oppress other languages in order to save our own. We just have to create opportunities for non-locals to learn and speak the language of their own volition. What a beautiful thought!

Now, the most important question: Is the survival of Kannada, or any other language, threatened by Hindi? Here is a report showing number of students in Karnataka and their choice of language for the medium of education in 2012-13: Kannada medium - 73.75 lakh;  English - 20 lakh; Urdu - 5 lakh; Marathi - 1.5 lakh; Tamil - 12,265; Hindi - 10,000;  Telugu: 7,088. The data gives us a clear picture of how the so-called protectors of Kannada are misleading the common man.

Yet, there is a lesson for those who think Hindi can be imposed from above on the whole nation - and that is that when such an attempt is made, or perceived to be made, sensible people like Shamsuddin fade away. A vociferous, often violent, minority, egged on by vested interests, becomes the dominant response.

In Tamil Nadu, when highway signs were altered in March, Dravidian parties, which have dominated the state since the 1960s’ anti-Hindi protests, warned the Centre against “attempts to establish Hindi hegemony through the backdoor.” M.K. Stalin, leader of the DMK, conveyed Tamils’ feelings in no uncertain terms: “The BJP has been devoting great attention to thrusting Sanskrit and Hindi on Tamil people,” he said, “I warn the Centre that it will have to face a new anti-Hindi agitation.” Another Tamil leader, MDMK’s Vaiko, cautioned the Centre against “repeating the mistakes of the past.”

Tamils, or southerners, are, however, not the only people who have agitated against the perceived imposition of Hindi by the Centre. In the 1940s, the Bengalis had the Manbhum movement; more recently, people from the north eastern states formed the North East Forum for International Solidarity protesting against Hindi Imposition after Delhi University made rules that seemed designed to force Hindi on them; in a case similar to the recent attempt in Tamil Nadu, when the National Highway Authority of India published notifications only in Hindi and English in Gujarat, the state’s farmers protested. The Gujarat High Court once even ruled that Hindi is not the ‘national language’; even Field Marshal K.M. Cariappa had urged people to “resolutely protest against any form of forcing Hindi as a national language. The forcing of one language on the people as a national language will certainly hamper the growth of other languages, some of which are older than Hindi and have superior literature.”

This time, the warning bell against the imposition of Hindi and Hindi-dom, admittedly an over-reaction, has been sounded in a liberal, ‘soft’ and cosmopolitan state. It must be heeded. India cannot be reduced to one-size in any aspect, not language, not religion, not politics. Attempts to do so on any count will only further the divide an already diverse land.

What every state can do to promote its own language

Being multi-lingual is said to

(The writer is a well-known Kannada writer and teacher)