The terror of masculinity: Abuse of power to show manliness

Ideological masculinity feels threatened under the perpetuation of gender equality. 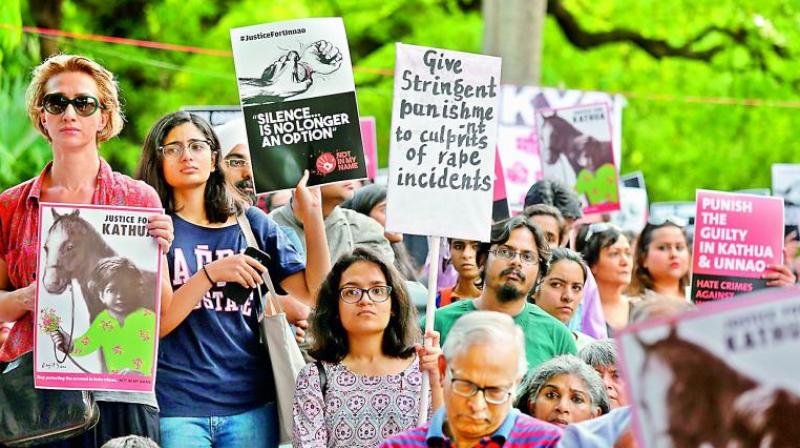 People take to the streets regularly to protest against the increasing levels of gender-based violence in the country.

The Indian perspective of ‘ideological masculinity’ is shaped and influenced by descriptions written as “what a man should be” or “what is perceived as manliness” in the scripts of Manu centuries ago. As it advocates the inferior status of women in a patriarchal society, it is adorably acceptable and contextually quoted in Indian society.

In addition, as it does not infringe upon the privileges enjoyed by men nor questions their status quo vis-a-vis women, they do not find it problematic.

Perpetrators of violence against women in India, whether happening within the four walls of homes or at public places, at workplaces or in social media circles, are strong believers of ideological masculinity since they adhere to the cynicism that women should live within the four boundaries of home, that too in a subordinate position to that of men. They are against mobility of women outside “the home” and enjoyment of any rights for that matter. All talk and claims to women empowerment and gender equality are impractical solutions and toxic resolutions for them.

All women-centric policies, methods and legal provisions appear as hindrances as they prove a roadblock in their way to claim “manliness” through abuse of physical power and entitlements. Often when these so-called believers of ideological masculinity have been questioned in the legal process about their acts of violence, very interestingly, they also shamelessly blame women for provoking them to conduct the act of violence. The very fact that in India girls are outscoring boys in secondary and senior secondary school examinations, entering higher and professional education, securing high-ranking positions within workplaces and now being in decision-making positions threatens men who subscribe to this ideology and they are letting out a huge cry of being victimised and discriminated against. This fear among these men takes shape in the form of hatred, anger and violence against women at homes and public places displacing the very socio-cultural fabric of India.

Since ideological masculinity develops as a reactionary attitude against gender equality, it often stays underlying to be identified under modern, branded attire, but takes out its ugly head when faces with criticism or resistance. To start with, they adopt methods of sex selection (even though it is illegal in India) to beget a son as they have daughter aversion. There is an incidence which stands an example to this that once when CSR was peacefully conducting a street play against sex selective practices at the Kashmir Gate Metro station when a group of young boys passed through the cemented corridor above and shouted ‘Maaro, maaro ladkion ko maaro, maaro (thrash the girls)’. This type of psychosis leads to dangerous outcomes as evident from rising cases of rapes, molestation and outraging the modesty of women coming to notice. Believers of this ideology seldom let their daughters attain higher education or go to a public school. They look for subsidies from government for raising their girl children as if they are economic burden on the family. They hardly tolerate the freedom of their wives and do not hesitate to indulge in violent acts if their wishes are not fulfilled. At times, this translates into demand for dowry during or after marriage. It happens across class, caste and social structures of Indian society. Hence, we need to identify these negative elements and mainstream them to bring about a gender-just society.

Similarly, at the workplaces, despite the Supreme Court mandate under the SH Act 2013, that every private and public organisation/institution/establishment must have an Internal Complaints Committee (ICC) with a civil society member as an external member to address sexual harassment at workplaces, many organisations headed by persons belonging to this ideology still blatantly defy it or if they feel compelled to establish the ICC under the government norms, make sure that “their selected persons” are there in such committees to “influence” the findings and recommendations of enquiries conducted. Whether you take the example of providing maternity benefit/ flexi hours/transport/creche facilities to promote women at workplace environment, these persons stand as barriers. It speaks volumes why women workforce participation rate in India is dwindling at 28%.

It is time that ideological masculinity may be addressed through institutionalised process of involving men and boys in discussions and deliberations pertaining to issues of women rights, human rights and gender transformation. If they (men and boys) will be consciously sensitized through systematic and sustainable efforts, only then they could reason out why it is essential for everyone — women and men —  to live in a gender-balanced society.