The world is different for women, especially in a country like India. 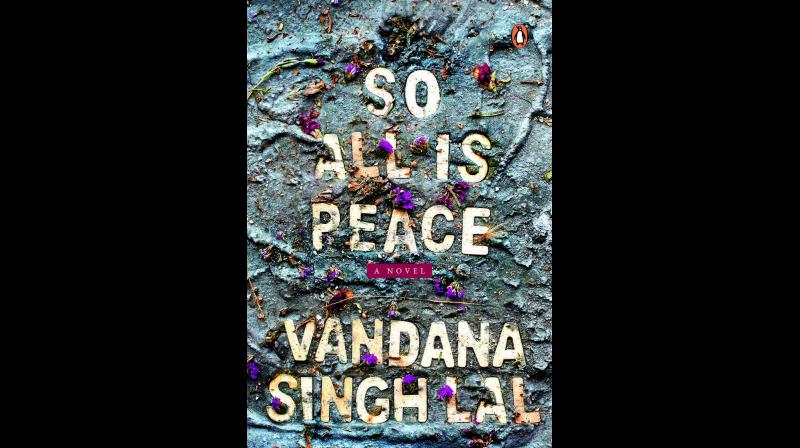 The world is different for women, especially in a country like India. The difference goes much beyond just women’s physical safety. Every interaction a woman has with the world is nuanced such that a man’s actions aren’t. So All is Peace explores the internal world of urban Indian women, annals of anatomy of human relationships, structure of urban environment, anatomy of starvation, web of twin-ship, ramifications of grief, loss and longing, and terrible secrets that holds perfectly normal facades.

“I love reading books that hook me and keep me thinking. Like Iris Murdoch had once said, ‘You can’t write any novel without implying values.’ But these values have to be understated, hidden behind actions and thoughts of the characters,” saysVandana.

A glimpse of the story
Set in 2014, the book looks at a tight, narrowly focused world. The city of Delhi is an important character in the book as is the gated housing complex in which two sisters, Layla and Tanya, live and are found starving. They are twins — ordinary, educated women who, after the death of their parents, have to face the everyday realities of the city that they live in.

The other characters in the story are Raman, a Ramnath-Goenka-Award winning investigative journalist who is tasked, against his will, to cover the human-interest story of the ‘Starving Sisters’, as Layla and Tanya are called in the media. There is Satya, the Assistant Commissioner of Police, investigating this rather high-profile case. Then there are Drs Vaidya and Anita, who cared for the sisters in the hospital; the president of the Resident Welfare Association, Sanjay Deol; the guard at the housing complex, Raju; the orderly at the hospital who takes pictures of the sisters, Shantaram; and Deepak, the impoverished but charming scion of an erstwhile royal family.

“The sisters, who are 25 five years old when the novel begins, have remarkable faces, even beautiful, if you aren’t too fussed about proportions and crave symmetry,” says Vandana, offering an insight into the novel. “When their photograph is published, a Twitterati war breaks out, with opinions divided equally and aggressively, almost violently, between people who think the sisters are
beautiful and those who think they aren’t. Everybody agrees, though, that the sisters, by no stretch of imagination, can be called ordinary. Even so, their starvation changes the sisters’ appearance.”

The dichotomy of society
Talking about the genesis of the story, Vandana tells us how a few years ago, she had read about two women who were found starving in an apartment in Delhi.”The story stayed with me. I wondered why two educated women would shut themselves up. What kind of society would allow it to happen? Slowly, I realised the society that we live in, while deeply connectedin some ways, can, at the snap of a finger, become completely physically disconnected. That is one of the paradoxes that So All Is Peace also deals with.”

Although she didn’t set out to explore this dichotomy, Vandana says it revealed to her as she wrote the book. “Around then, I saw Theodore Chasseriau’s painting, The Two Sisters, at the Louvre. The painting spoke to me. I knew then that I was going to write about twin sisters, although the ‘how, when and why’ of it all weren’t quite clear to me then,” she adds.

As we near the end of our interaction, Vandana adds, “There are unexpected twists and darkness and a shocking denouement. You’d want to know what happens next and why certain things happen as they do.”

Excerpt from the book
‘MAKE IT ALL GO AWAY!’ I shout into that darkness and I bite into her ear that has landed very close to my mouth. She starts to scream trying to unshackle my fingers and tries to scramble to her feet but I hold on to her. I feel the saltiness of her blood on my palate, the tautness of her writhing wrist inside my palm, the weight of her body struggling against mine. Her breasts against my breasts, her stomach against the burning flames of mine. My insides heave and heave and I throw up on her face, on her dress, on her body and all over my bed. But even in the middle of my pain and her struggle, even as I am spewing out my insides, somewhere in the back of my head I am trying to remember the chemical composition of the first thing I have tasted in a very long time. The indeterminate broth that they had fed me did not count because I did not know what it was. But this I know—B–blood, H–Haemoglobin, P–Protein which included A–Albumin, G–Globulin and F–Fibrinogen.

Tags: so all is peace