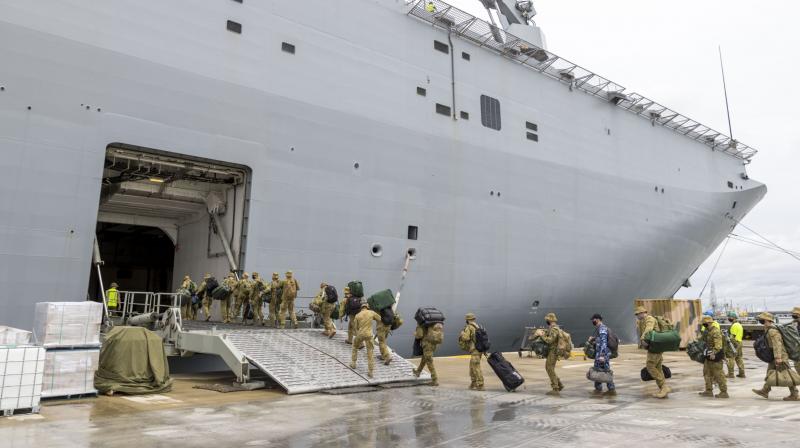 Dutton said the Australian government was working with Tongan authorities to ensure the aid could still be delivered safely without passing on Covid to anyone on the island. (Bloomberg Image)

Almost two dozen crew on board an Australian Navy ship on its way to provide relief to the Pacific island of Tonga have been diagnosed with coronavirus, potentially hampering aid efforts to the Covid-free nation.

Australia’s Defence Minister Peter Dutton said 23 personnel on the HMAS Adelaide had been infected, in an interview on Sky News on Tuesday. The ship left from Brisbane on Friday with a 600-strong crew as well as humanitarian and medical supplies to assist Tonga in the wake of a volcanic eruption.

At least three people died when the Hunga Tonga-Hunga Ha’apai volcano erupted this month, causing tsunami warnings across the Pacific and covering the Tongan capital Nuku’alofa in a blanket of ash.

Dutton said the Australian government was working with Tongan authorities to ensure the aid could still be delivered safely without passing on Covid to anyone on the island. Since the beginning of the pandemic, Tonga has only recorded a single Covid-19 case, according to the World Health Organization.

“Obviously they need the aid desperately, but they don’t want the risk of Covid,” said Dutton, adding that some aid had already been delivered to Tonga through Australian C-17 flights to the island.

Separately, one member of the Japan Air Self-Defense Force that had been deployed to deliver aid to Tonga tested positive for coronavirus, Defense Minister Nobuo Kishi said at a briefing in Tokyo Tuesday. The person was tested in Australia after developing a fever on Monday morning and is in a stable condition in isolation there.

The Japanese airmen had been on the ground at Tonga’s Fuaʻamotu International Airport on January 22 delivering drinking water and cleaning equipment. Kishi said sufficient other personnel are available and Japan’s mission won’t be impacted.

Pacific lockdowns
The outbreak onboard the HMAS Adelaide comes as a number of Pacific nations are struggling to eliminate Covid-19 in their communities, with both Kiribati and Samoa recently announcing lockdowns.

Both countries recorded fewer than 100 cases combined since the start of the pandemic, according to the World Health Organization, but are now seeing a steady rise in infections. On Monday, Samoa extended its lockdown until Thursday for its population of more than 200,000, with shortened opening hours for supermarkets, banks and chemists.

At the same time, vaccination rates have lagged behind the rest of the region for many Pacific nations. While both Australia and New Zealand have given more than 75% of their populations two doses of a Covid-19 vaccine, that rate has flat-lined at just over 60% in Samoa and Tonga.

In Kiribati, less than 40% of the population have received two doses, let alone boosters, to protect against the highly-infectious omicron variant.