In their speeches, PM Netanyahu and Modi described each other as, ‘my friend’ and embraced each other 3 times. 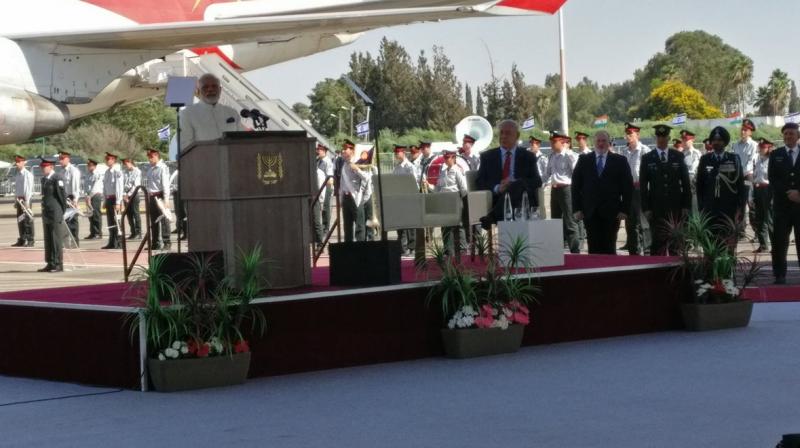 Tel Aviv: Laying the foundation of a new chapter in relations with Israel, Prime Minister Narendra Modi began his "ground-breaking" visit on Tuesday, receiving an extraordinary welcome by the Jewish nation.

The personal chemistry and the warmth between Modi and Prime Minister Benjamin Netanyahu was apparent in their remarks and their hugs.

Reflecting the importance that Israel is according to the first visit by an Indian prime minister since Israel's establishment 70 years ago, the host nation pulled out all stops to welcome Modi -- Netanyahu broke protocol to come to the Ben Gurion airport, an honour reserved only for the US President and the Pope; Netanyahu's entire Cabinet was also present as were representatives of various religious orders.

In their prepared speeches, both leaders described each other as, "my friend" and embraced each other three times. "Aapka swagat hai, mere dost (welcome, my friend)," Netanyahu said in Hindi, adding, "We love India." Modi responded by speaking a few words in Hebrew, "Shalom (hello), I am happy to be here."

"It is truly a historic visit," said Netanyahu while welcoming Modi who was wearing a cream colour 'band gala' suit and a dark blue handkerchief in the pocket.

At the start of the three-day visit, Modi was also accorded a Guard of Honour after an Israeli military band played the national anthems of the two countries.

Hailing Modi as "a great leader of India and a great world leader", Netanyahu said, "we have been waiting for the last 70 years" for a visit by an Indian prime minister.

They vowed to give a push to the bilateral relationship in all aspects and jointly deal with the common threats like terrorism.

"I remember what you told me in our first meeting – when it comes to India and Israel relations, the sky is the limit. But now, prime minister, let me add even sky is not the limit.

We are also cooperating in space," Netanyahu told Modi. Talking about the vast possibilities of cooperation between the two countries, he said, "We can do even more, even better together."

Speaking later, Modi said, "It is my honour to be the first ever Indian prime to undertake this ground-breaking visit to Israel." He said his visit was about the strength of the two societies and their strong partnership.

"Building a strong and resilient relationship with Israel will be my intent and focus...We have to secure our societies against the common threat of terrorism," Modi said.

"Together, we can do even more and even better (for India-Israel ties)," he added.
Noting that India is an old civilisation but a young nation, Modi said, "We have a talented and skilled youth, who are our driving force."

Describing Israel as an "important development partner", he said, "This is an exciting journey that we will undertake together, for the good of our people and our society."

Modi said his visit celebrates the strength of centuries-old links between the two societies and "based on these bonds, our partnership has maintained a strong and sustained upswing since the establishment of full relationship, diplomatic relations, 25 years ago."