Interestingly, it was wise of Meghan not to include the “vow” of obeying her husband during the marriage ceremony. 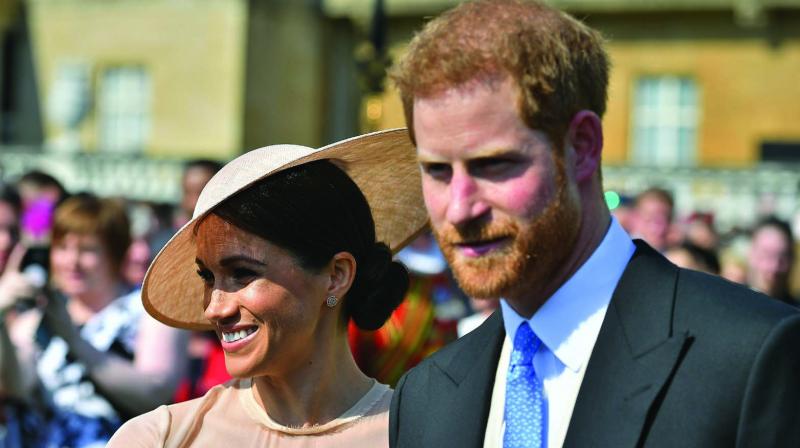 Prince Harry, Duke of Sussex (R), and his wife, Meghan, Duchess of Sussex, attend the Prince of Wales’ 70th Birthday Garden Party at Buckingham Palace in London on May 22, 2018. (Photo: AFP)

Diplomatic and social messages conveyed by Prince Harry and Meghan Markle’s marriage are too strong to be ignored. What an irony, he has married an American of mixed lineage at a time when superpower is headed by a President who appears a little too conscious of his racial “superiority”. This hard reality was exposed during his campaign. Not that he is the only person to entertain such bias even in today’s world. Yes, for years the British have been well known for their “stiff-upper lip” attitude towards others, including Americans. From this angle, Americans have not been known for a similar approach towards British.

This isn’t surprising. After all, origins of most white Americans are to this day traced to Great Britain. Incidentally, this also includes Meghan’s father. The majority make this claim with a sense of pride. So, there is nothing surprising about actual Britons considering themselves socially of a higher class than even white Americans. Down the decades, this sense has considerably increased due to several factors. One of these is the difference, which stand out quite markedly, in British English and American English. These include spellings, pronunciation and also the style of speech. Though, of late, American English is extending its reach, the British retain their “superiority” about their command over English.

Now, it is to be watched, whether the new entrant into the royal family, adapts herself to usage of British English or chooses to retain her American style of speech and spelling. Well, considering that for more than three decades, she and her spouse have apparently not given a thought to using any other style of English, but that of their respective nations, it is hard to expect either to change it now. Besides, the two may have got used to this and accepted this taxing dilemma while dating each other. Nevertheless, it wouldn’t be surprising if during formal conversation with other members of the royal family, the newly-married couple has to spend some time, explaining words, the American pronunciation of which is totally different from British. As for instance, the word anti is pronounced as antai, schedule as eskedule, letter z (zed) as zee and so forth.

Interestingly, it was wise of Meghan not to include the “vow” of obeying her husband during the marriage ceremony. Had she included it, she would have probably unintentionally committed herself to try using British English, at least while speaking, and that would have probably led to her being constantly on alert about her speech, whether it was American or British? Of course, the lady must be fairly familiar with marked differences in English of the two countries and may be adept at using the right language as the time and occasion demand, but is certainly not bound to do so.

Socially, culturally and diplomatically, the English issue may be said to be of an extremely minor nature, when other issues are taken note of in this royal wedding. However, the language issue would have been taken note of even if the bride was not of a mixed lineage. As suggested earlier, it is not without reason that Britons are extra-particular about retaining British English. It may be noted, before the Internet had its impact, use of British English was emphasised in Indian educational system, academics and also the press. However, the recent years are gradually witnessing usage of both styles. In general, not much importance is given to whether programme (British English) is spelled as such or as program (American), favour (B) as favor (A), colour (B) as color (A) and so forth. Going off-track, thanks to English used on Facebook, WhatsApp and other areas, even Indian Hinglish is beginning to stand out.

With respect to long steps that Harry and Meghan have taken not just to be married but also in ensuring the nature of their marriage, they have in their own style snubbed all who still retain bias towards non-whites. It was not without reason that the sermon at the wedding was delivered by black Bishop Michael Curry from the United States. Yes, it is a simple message. British royalty is not decided by colour. Nor is religion. Also, the colour issue does not lower the stature of monarchy, at least not for Prince Harry and his immediate relatives and friends. That Prince Charles walked Meghan down a part of the aisle confirmed this further. Clearly, the monarchy has not simply yielded to Harry and Meghan’s decision. The ceremonies have sent the message that the royal family has no inhibitions about the bride’s racial background and her asserting it strongly. And this is perhaps a minor reflection of similar changes taking place in society at large. Barack Obama’s election as US President was an outstanding example. One is reminded of Alfred Tennyson’s lines: “The old order changeth, yielding place to new and God fulfils himself in many ways.”

The old order, however, still retains its command for quite a few. Once celebrations are over, there is a view: speculations may be voiced about Meghan’s role and her mixed lineage. Perhaps, this may be regarded as a million dollar, ah sorry, British pound question or just fake “news” spread by those entertaining racial bias!