The India Estonia business forum would be led by CII from the Indian side. 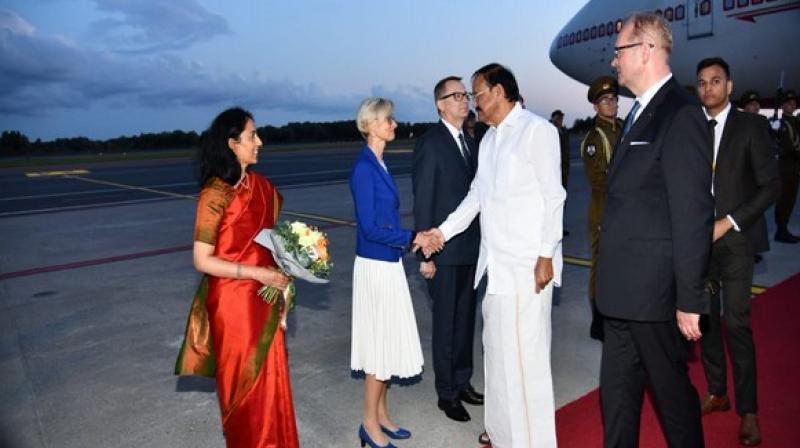 Earlier, Naidu had visited Lithuania and Latvia, where he batted for strengthening economic and cultural relations with India. (Photo: ANI)

Tallinn: Vice President Venkaiah Naidu on late Tuesday evening (local time) reached Estonia, the final leg of his five-day visit to the three Baltic nations--Lithuania, Latvia and Estonia--where he is looking forward to intensifying the bilateral cooperation shared with India.

"Being received by Ms.Vani Rao, Ambassador of India to Finland and Estonia, Ms. Katrin Kivi, Ambassador of the Republic of Estonia to India and Mr. Lauri Bambus, Chief of State Protocol, Ministry of Foreign Affairs and others upon my arrival in #Tallinn, #Estonia today," Vice President's Office wrote on Twitter.

During his stay in Estonia, on August 20 and August 21, the Vice President will hold meetings with President of Estonia Kersti Kaljulaid, Prime Minister Juri Ratas, and the President of the Riigikogu (Estonian Parliament) Henn Polluaas, the Ministry of External Affairs said in a statement.

Naidu is also scheduled to address the heads of missions' conference. The India Estonia business forum would be led by CII from the Indian side.

He will also meet with the Indian community in Estonia.

"The visit of the Vice President to the three Baltic countries is to advance India's outreach to the important countries in the region. This visit will provide an opportunity to brief the Baltic countries and their views on enhanced opportunities for cooperation, thus further strengthening our existing friendly ties," the MEA statement read.

Earlier, Naidu had visited Lithuania and Latvia, where he batted for strengthening economic and cultural relations with India.

Noting that the bilateral trade between the two countries had immense potential, the Vice President also called the Indian community as "mediums for bringing foreign investments, technology, expertise and goodwill" to Latvia and India.
During his visit, Lithuania further backed India to have permanent membership in an expanded and reformed United Nations Security Council.