Favouring the People's and Freedom parties is distrust of migrants and Muslims among many Austrian voters. 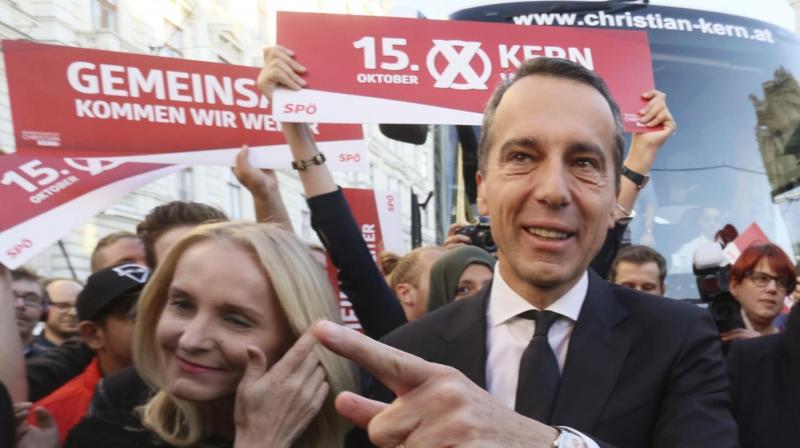 Although the Social Democrats have come either first or second in elections since World War II, voters are now more receptive to calls for tough migration rules than that party's focus on social justice. (Photo: AP)

Vienna: Wrapping up a bruising political campaign season, Austrian political parties were counting down Saturday toward an election that could turn the country rightward after decades of centrist governance amid voter concerns over immigration and Islam.

Sunday's vote is coming a year ahead of schedule after squabbles led to the breakup last spring of the coalition government of the Social Democrats and the People's Party. A total of 16 parties are vying for 183 seats in the national parliament and will be chosen by Austria's 6.4 million eligible voters. But less than a dozen parties have a chance of getting seats.

The People's Party, which has shifted from centrist to right-wing positions, is leading in the pre-vote polls. Austria's traditionally right-wing, anti-migrant Freedom Party is expected to come in second and the center-left Social Democrats are thought to be trailing in third place. Others that may clear the 4 percent hurdle needed to get into parliament seats are the Greens, the liberal NEOS, and Liste Pilz, led by former Greens politician Peter Pilz.

Favouring the People's and Freedom parties is distrust of migrants and Muslims among many Austrian voters.

The 2015 influx of hundreds of thousands of people fleeing the war in Syria and poverty elsewhere into the EU's prosperous heartland left Austria with nearly 100,000 new and mostly Muslim migrants. That has fuelled fears Austria's traditional Western and Christian culture is in danger. As a result, voters are receptive to the anti-migrant platforms of both the People's Party and the Freedom Party.

Although the Social Democrats have come either first or second in elections since World War II, voters are now more receptive to calls for tough migration rules than that party's focus on social justice.

Social Democratic Chancellor Christian Kern says his party will go into the opposition if it does not Sunday. With a handful of other parties struggling to just get into parliament, the most likely post-vote scenario is a People's Party-Freedom Party coalition that would shift the government significantly to the right.

But other coalitions are possible, depending on the results of Sunday's vote.