Thai newspapers are running out of stock, printing special editions with archival photographs. 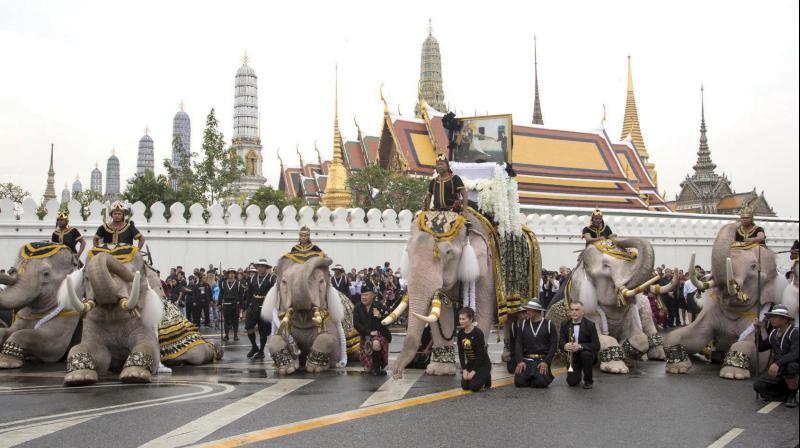 Mahouts lead 11 white elephants to kneel in front of the Grand Palace in honour of Thailand’s King Bhumibol Adulyadej in Bangkok, Thailand on November 8. (Photo: AP)

The first month of mourning for Thailand’s King Bhumibol ended on November 13, a day before the Loy Krathong festival and the Super Moon. I went to Wat Arun, Temple of the Dawn, where Bangkok celebrants floated flowers and candles down the Chao Praya River, beneath the golden spires of the Grand Palace where the king will lie in state for one year until his cremation. Grief now mingles with celebration; street corner bands play the king’s hit songs, artists paint his portrait, mahouts from Ayutthaya led a regal procession of 11 white elephants, who knelt in reverence before the Grand Palace. Thai newspapers are running out of stock, printing special editions with archival photographs and interviews with those who knew the king; his tailor and shoemaker, diplomats noting his fluency in five languages, wounded soldiers who lay in hospital beds as the king thanked them for fighting communist guerillas, sportsmen who watched him build his own boat and win a gold medal in sailing in the 1967 Asian Games. In this fading age of kings, Bhumibol Adulyadej was sui generis.

There are many programmes about King Bhumibol’s Sufficiency Economy, based on “moderation, prudence, that uses knowledge and virtue as guidelines in living”, similar to the Gandhi’s Swadeshi principles. The King’s projects greatly advanced Thailand’s living standards until globalisation ripped through Asia in the 1990s, creating inequality and discord, as it has across the globe. When Thailand was hit by the 1997 Asian financial crisis, King Bhumibol stated; “Being a tiger is not important. The important thing is for us to have a sufficient economy… to have enough to support ourselves.”

Modernity’s grievances found a leader in Thaksin Shinawatra, a telecom billionaire with a Master’s degree in criminology from Texas State University, head of the populist, anti-monarchist Thai Rak Thai Party, which opposed the People’s Alliance for Democracy, middle class supporters of the monarchy, known as Yellow Shirts. (King Bhumibol was born on a Monday; in Thai culture yellow is his fortune colour). A Yellow Shirt intellectual who has reached out to Red Shirt leaders told me “We understand the problems raised by the Red Shirts — we want to fix them too. The challenge is finding a way we can work together, with dialogue, not conflict.”

Bangkok has a vocal contingent of falang reporters — that’s Thai for ferungi, foreigner — fixated on the pessimist narrative that after King Bhumibol’s death the Red Shirt-Yellow Shirt divide will trigger chaos throughout the land. (For the record, many such falangs were dead certain that Clinton would trounce Trump in the recent US presidential election). There is a tiresome conceit in these assumptions, when observing daily gatherings and reading poignant eulogies from Thai citizens of every class and region, and, which show the special bond between the king and his people. He helped them build a strong country, and his passing has brought the nation together.

As investigative reporters get laid off and Twitter feeds proliferate, there’s a credibility void once filled by seasoned journalists, the guy on the ground who speaks Thai, a basic qualification for interpreting this complex and pivotal nation. There are writers bars in Bangkok where you will find old school journalists who critique corporate media’s shallow reportage, wherein the fault lines in Thai society are simplistically rendered as “Poor Red Shirts vs. Rich Yellow Shirts”, and churlish bloggers who cast all Red Shirts as beleaguered soldiers of democracy tormented by an antique plutocracy.

One such blogger is Andrew Spooner, who posted vicious tweets about the king as he lay dying in Siriraj Hospital. Another is Andrew MacGregor Marshall, who purports to be a “Thai expert” but admits to speaking no Thai, yet slanders and mocks the Thai monarchy in an obsessive manner that many find offensive, to which he replied: “I’ve never insulted the Thai people. I just said (accurately) that many are enslaved and  brainwashed by monarchy.” This prompted ludicrous comments like “this place is as bad as North Korea” posted from a beach resort in Phuket, perhaps?

What is not widely known is that the media’s Red Shirt bias was facilitated by Mark Penn, political strategist for Thaksin Shinawatra at the New York PR firm Burson-Marsteller, whom Thaksin hired in 2001 to manage his successful bid for Prime Minister. Mark Penn was also chief consultant to President Bill Clinton, manager of Hillary Clinton’s first failed presidential bid in 2008. Penn’s role in building the Thaksin dynasty has been covered by France’s Le Monde, but was never reported in the US until 2015, when Penn’s cover was blown in a trove of leaked emails from his ex-boss, Secretary of State Hillary Clinton. Under the subject line “No Longer Homicidal” US secretary of state Clinton wrote to her Chief of Staff Cheryl Mills; “Could you try to contact Mark Penn to confirm he no longer represents Thaksin before I call Thai PM at 9.30?” Wikileaks also published US embassy cables about Thaksin’s funding for covert militia inciting Buddhist-Muslim violence in Thailand’s southern provinces.

I was in Bangkok in 2010 and witnessed Red Shirt riots which left over 800 people dead, thousands wounded and $6 billion of property damage. Thais, and falangs, were outraged by Thaksin’s success at spinning the international media against the Yellow Shirts. A US state department official who served in Bangkok from 2005 to 2009 told me: “We knew that Thaksin hired an American consultant, and we were concerned about his campaign to destabilise the Thai government and the Thai economy, but Penn was careful, he worked behind the scenes managing the Thaksin media and campaign.”

In 2006 Thaksin was ousted in a bloodless coup and fled Thailand to avoid trial for money laundering and human rights violations.

Despite what some falangs assert, Thaksin’s influence has waned; a contingent of Red Shirt leaders no longer see him an agent of change and reform as he is irreparably tainted by corruption and his brutal War on Drugs, where thousands of mostly young Muslim boys were slaughtered.

Thaksin continues to fund anti-monarchist propaganda from his exile bases in Cambodia and China, it is alleged that Andrew Spooner and MacGregor Marshall are on Thaksin’s payroll, and Mark Penn is still top strategist. What other motive, besides financial inducement, drives these falangs to incite conflict in Thailand? Who benefits, should Thailand cease to be an anchor of stability on a turbulent continent? Certainly not the Thai people, or their neighbours. King Bhumibol once said; “In Thailand’s history there have been dissensions from time to time, but in general, unity has prevailed.” Let us hope that it will.