The university siege has become a battle of wills between Hong Kong's stretched police force and the constantly innovating protest movement. 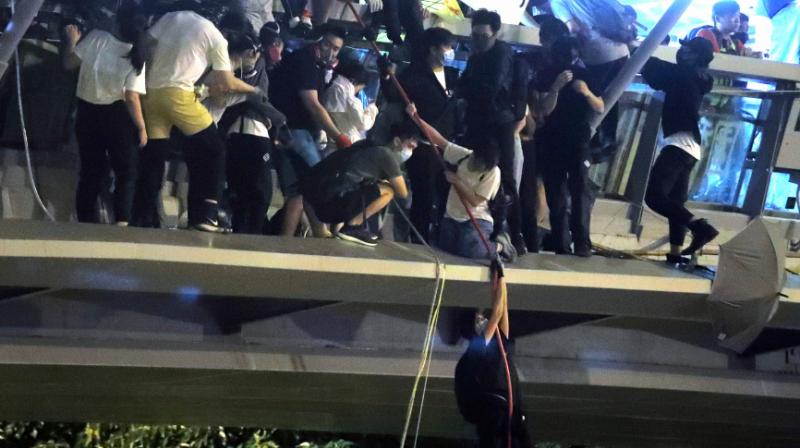 Dozens of Hong Kong pro-democracy protesters dramatically escaped a two-day police siege at a university campus late Monday by shimmying down ropes from a bridge to waiting motorbikes, after Beijing again warned it could intervene to end the crisis engulfing the city. (Photo: PTI)

Hong Kong: Dozens of Hong Kong pro-democracy protesters dramatically escaped a two-day police siege at a university campus late Monday by shimmying down ropes from a bridge to waiting motorbikes, after Beijing again warned it could intervene to end the crisis engulfing the city.

Clashes rumbled into the early hours of Tuesday between protesters and police who had threatened to use deadly force to dislodge activists holed up at the Hong Kong Polytechnic University (PolyU).

The university siege has become a battle of wills between Hong Kong's stretched police force and the constantly innovating protest movement. Late Monday, dozens of black-clad protesters on a footbridge slithered down ropes several metres to a road below, where they were whisked away on motorbikes.

In an apparently co-ordinated effort, tens of thousands of Hong Kongers streamed towards the PolyU campus to break the siege, as clashes simultaneously raged with police nearby in Kowloon.

Several dozen people remained on the campus, one protester told AFP, although a number of minors were allowed to leave after negotiations with lawmakers.

A new phase of violence and drama began last week and has led to chaos throughout the semi-autonomous city of 7.5 million people, with schools closed, train lines disrupted and major roads blocked by barricades.

China has refused to budge on any of the protesters' demands, and warned it will not tolerate dissent in the financial centre. A brief appearance by Chinese soldiers on Hong Kong's streets over the weekend -- supposedly to clean up debris -- fuelled concerns that Beijing could intervene militarily.

China's ambassador to Britain upped the ante on Monday. "The Hong Kong government is trying very hard to put the situation under control," Liu Xiaoming said.

"But if the situation becomes uncontrollable, the central government would certainly not sit on our hands and watch. We have enough resolution and power to end the unrest."

The United States said Monday that Hong Kong authorities bear the "primary responsibility for bringing calm" to the city. Both Washington and the European Union urged restraint from all sides and called for an inquiry into the use of force during the protests.

Earlier, police made dozens of arrests as protesters made a dash for it -- sometimes beating people with batons as they held them on the ground, or kicking their heads. "Other than coming out to surrender, I don't see any viable option for them," Cheuk Hau-yip, the police commander in Hong Kong's Kowloon West district, told a press conference, before the daring breakout.

The campus has been designated a 'riot' zone -- a charge of rioting carries up to 10 years in prison -- and Cheuk reiterated that police will use live rounds against protesters if faced with deadly weapons.

Desperation deepened overnight inside the campus, where exhausted and scared mainly young protesters rationed their remaining food and bottled water. "I will run but never surrender. I don't want to get arrested," said a protester who gave his name only as 'W'.

Protests started in June as a peaceful condemnation of a now-shelved China extradition bill, but have morphed into a confrontational action to defend the city's unique freedoms from perceived encroachment by Beijing. Even by recent standards, the last few days have stood out as particularly violent, with one police officer hit in the leg by an arrow, and an armoured police vehicle torched.

Officers fired live rounds on Monday, but said they did not think anyone had been hit. Hong Kong police have largely relied on tear gas, water cannon and rubber bullets thus far.

They routinely carry sidearms, but until now they have used them only sparingly. Three people have been shot, none of them fatally.

Protesters accuse police of heavy-handed tactics and abuse during the months of rolling unrest, and have demanded accountability. The campus occupation was a twist in tactics by a leaderless movement so far defined by its fluid nature. But the police encirclement has caught the movement out.

Protests erupted in several other parts of peninsular Hong Kong, with makeshift barricades across normally bustling shopping streets. Police fired tear gas and water cannon at groups who had gathered in the Tsim Sha Tsui and Mong Kok areas, where they also made a number of arrests.

The unrest has rocked previously stable Hong Kong, tipping the international financial hub into recession and frightening off tourists. Violence has worsened this month, with two men killed in separate incidents.

Demonstrators last week engineered a "Blossom Everywhere" campaign of blockades and vandalism, which shut down sections of Hong Kong's transport network and closed schools and shopping malls. Chinese President Xi Jinping has said the crisis threatened the "one country, two systems" model under which Hong Kong has been ruled since the 1997 handover from Britain.

On Saturday, dozens of soldiers from the Chinese People's Liberation Army briefly left their Hong Kong barracks to help clean up the streets -- a rare and symbolic move for troops meant to only be called out in a time of emergency.​