Earth Day Network is a global phenomenon, and is today the world’s largest environmental movement. 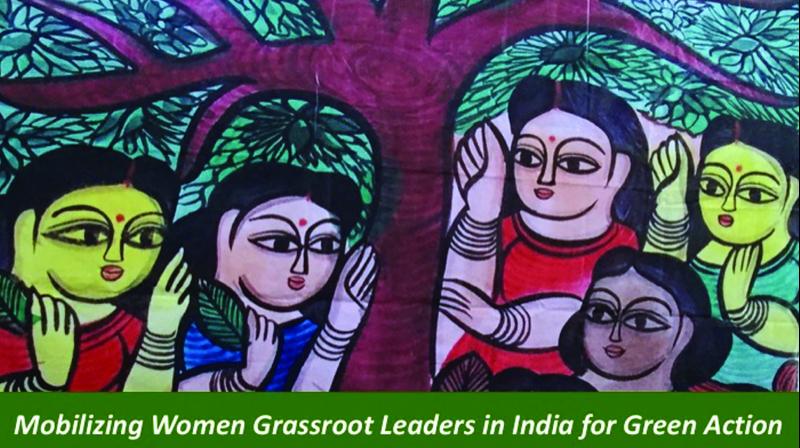 A painting representing the role of women in planting trees.

Lawyer and activist Kathleen Rogers, currently Earth Day Network President was in India last week; in her words “India is critically important to the world, and not just in the context of creating a green economy. I try to come to India at least once a year”.(The Nature and Sustainability journal in its Feb 11th issue said that as per satellite data of 2000-2017, India and China are leading the global greening effort)

Earth Day Network is a global phenomenon, active in nearly 200 countries, and is today the world’s largest environmental movement.

Kathleen Rogers shared “this trip is focused on creating an infrastructure, enhancing our logistics to gear up to celebrate Earth Day Network’s 50th anniversary in April 2020. Earth Day Network works through partnerships with people and institutions to create awareness of our goals and then to execute them; we believe in networking, not in creating a vast organization. India has some of the smartest people I know; and has the potential to take along all of South East Asia with it.The voice of India is heard all over the world; the cultural impact India has is great.

There are difficulties; in our development community, people don’t work together. I remember one time our India representative Karuna Singh who is based out of Kolkata convened a group of NGO’s and asked how many of them worked together. I think not even one hand went up! We want to work with people who don’t necessarily know about our goals; we want to reach out to new groups who we want to “convert” to our way of thinking. So we want to reach the youth, through schools and colleges, faith based groups who have a wide reach, people in the world of arts who are influencers, mayors of towns. As the tipping point so to speak approaches, we need to reach out to multipliers not individuals. Recently we connected with thousands at the Jaipur Literature Festival.”

Karuna Singh, Earth Day Network representative for South East Asia shared that one of the goals this year was to plant 7.8 billion trees by 2020; apparently in India, EDN has already received nearly a million written pledges to plant one tree. Earth Day Network Ambassador for India, Grammy nominated Carnatic vocalist Dr Bombay Jayashri Ramnath said “in the context of planting trees, women in rural India need to play a greater role. Women should be motivated in preserving our environment as they are the true repositories not only of tradition but also of inculcating values in a new generation. Their day to day activities are more linked with nature and its nurturing.”

Kathleen said another goal was “Protect our Species”; in India the centuries old philosophy of the sanctity and universality of life is so relevant. (The Sanskrit “vasudhaa aiv kutumbakam”, or all living beings are one family being just one well known verse) The recent debate in India on the killing of the alleged man eating tiger Avadhi is a case in point – in any other country the killing would not even be an issue of debate Kathleen added. Karuna shared there are only 150 hanguls left in India; we are trying to sensitise people about this, another issue is the cleanliness of the Ganga from which dolphins have fled as they cannot survive in dirty water.

The power of the arts in communication is undisputed; that is why in India, both Ambassadors of EDN, Dr Bombay Jayashri and Ricky Kej are artists. (Grammy awardee Ricky Kej has performed at the UN on several occasions, raising issues of climate change through his songs).  Ricky was being an Ambassador for Earth Day Network, and spoke of this year’s theme of Save the Species. He stressed “that issues are coming up too late; like the great Indian bustard when it’s perhaps already too late. I feel human and animal conflict is a bigger issue for us than poaching. The obvious logical humane solution is relocation but the experience is so traumatic. I have made a film on relocation of elephants and it’s painful even to watch. (Indeed there were tears in most eyes during the screening of the brief film at IGNCA).