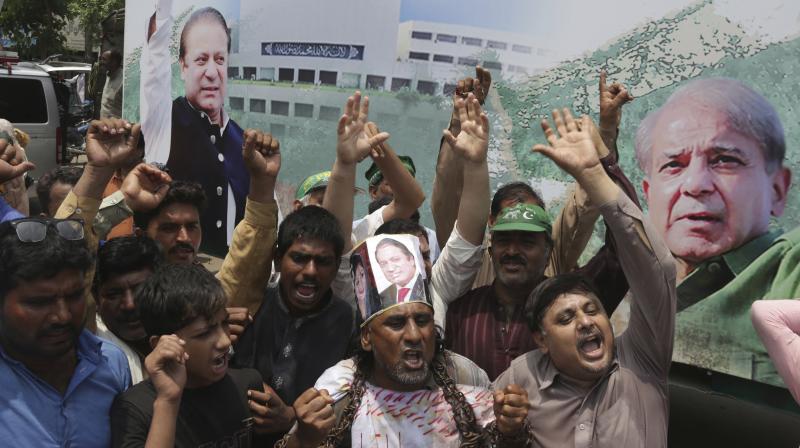 Lahore/Abu Dhabi: Pakistan's former prime minister Nawaz Sharif and his daughter Maryam will be arrested on Friday after their arrival in Lahore from London following their conviction in a corruption case, a senior official said, as the defiant leader questioned the credibility of the July 25 polls amid a crackdown on his supporters.

Sharif, 68, the supremo of the Pakistan Muslim League - Nawaz, and Maryam stopped over in Abu Dhabi on their way to Pakistan from London. Their flight from Abu Dhabi to Lahore was delayed by over two and a half hours. They are expected to land at Lahore's Allama Iqbal International Airport at 8:58 pm (local time) on Etihad Airways flight EY243.

Forty PML-N leaders are accompanying them on the flight.

Speaking to the BBC at Abu Dhabi airport as he waited to change planes, Sharif said: "What credibility will these elections have when the government is taking such drastic action against our people and this crackdown is taking place all over the country?"

Ahead of his arrival in Lahore, security was tightened and all roads leading to Punjab's capital city have been blocked using shipping containers to prevent PML-N supporters to reach there.

Around 10,000 police officers have been deployed across the city to maintain law and order and prevent PML-N supporters to reach the Lahore airport to greet Sharif, who was convicted by an anti-corruption court last week over his family's ownership of four luxury flats in London.

The Punjab government has suspended mobile and internet services in Lahore. Director General of the country's anti-graft body - the National Accountability Bureau (NAB) -- Shehzad Saleem said that both convicts will be arrested as soon as they come out of the plane and taken to Adiala Jail in Rawalpindi.

Officials said that security was increased around the area of jail. There are reports of clashes between supporters of Sharif and police in Lahore and several other cities.

In a video message, tweeted by 44-year-old Maryam, the former premier urged his followers to stand with him and "change the fate of the country".

"The country is at a critical juncture right now," a grim looking Sharif said. "I have done what I could. I am aware that I have been sentenced to 10 years [in prison] and I will be taken to a jail cell straight away. But I want the Pakistani nationals to know that I am doing this for you," he said.

"This was neither a case, nor there is a verdict. This is a game of blind revenge, which is continuing. There is no case against me, there never was. The whole Panama case was started to fix politics and to keep me out because I wanted a stronger democracy," he told The Nation newspaper before his departure from London.

Sharif said that "draconian crackdown" on his supporters by the Punjab government shows that the authorities are scared of his appeal and are desperate to stop tens of thousands of people from reaching Lahore airport to welcome him and his daughter. Maryam also posted some moving pictures of their visit to the hospital to see her ailing mother Kulsoom, who is on ventilator.

The two PML-N leaders are returning to Pakistan to face a prison sentence handed out on July 6 by an accountability court in the Avenfield properties case, one of the three corruption cases against him following the Panama Papers scandal. Sharif and Maryam have been sentenced to 10 and 7 years in jail respectively.

Sharif, who was in London with his wife and children when the verdict was announced, said he is returning to Pakistan from London to fulfil his pledge to "honour the vote".

Addressing a press conference in London with Maryam by his side, Sharif had said he has decided to return to the country "despite seeing the bars of prison in front of my eyes".

"Is there any Pakistani who has had three generations of his family go through an accountability process only to find out that no corruption was ever done?" he asked during the presser. He also criticised the court's decision to sentence his daughter to a seven-year term in jail, saying those who did so "did not even remember in their hate what stature daughters have in Pakistan".

Over 300 PML-N workers and leaders have been detained in Pakistan in a massive crackdown on the party activists in Lahore ahead of the arrival of Sharif.

The NAB has also formed a 16-member team to arrest Sharif and Maryam and shift them to Adiala Jail Rawalpindi after producing them at the accountability court that sentenced the father-daughter duo last week. Sharif was disqualified by the Supreme Court last year in the Panama Papers case.

Sharif, has been one of the country's leading politicians for most of the past 30 years. He remains popular, especially in Punjab, the most populous and electorally significant province. He and his party have accused the military of being behind his conviction, saying it is going after the PML-N for its criticism of the security establishment.

The military, which has ruled Pakistan for about half of its 70-year history, has denied it has any "direct role" in the elections or the political process.