Iran, crippled by existing US sanctions that include the blocking of most of its crucial oil exports, sought to play down the US move. 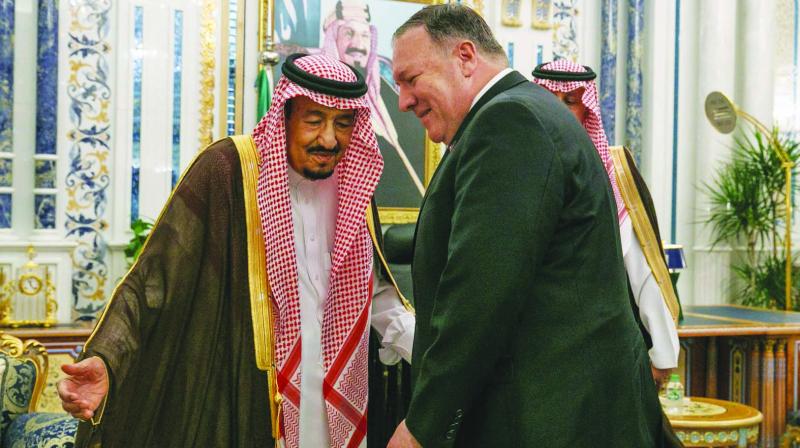 US secretary of state Mike Pompeo is received by Saudi King Salman bin Abdulaziz at Al Salam Palace in Jeddah on Monday. Mr Pompeo travelled to meet Saudi leaders on building a “global coalition” against Iran. Mr Pompeo will begin a three-day visit to India on Tuesday. (Photo: AFP)

Washington: The United States imposed sanctions on Monday on Iran’s supreme leader Ayatollah Ali Khamenei and a string of military chiefs, tightening pressure on the country that President Donald Trump threatened with “obliteration” if it seeks war.

Mr Trump signed the punitive financial measures in the Oval Office, calling this a “strong and proportionate response to Iran’s increasingly provocative actions.” Repeating that “never can Iran have a nuclear weapon,” Mr Trump said it was now up to Tehran to negotiate.

“We do not ask for conflict,” he said, adding that depending on Iran’s response the sanctions could end tomorrow — or it “can also be years from now.” Expanding on the new measures, the Treasury said the United States will blacklist Iran’s foreign minister Mohammad Javad Zarif and block “billions” more in Iranian assets, with eight top commanders from Iran’s Revolutionary Guards already added to the list. Tensions are running high after Iran shot down a US spy drone last week and Mr Trump considered, then canceled, a retaliatory strike. Iran, crippled by existing US sanctions that include the blocking of most of its crucial oil exports, sought to play down the US move.

“Are there really any sanctions left that the United States has not imposed on our country recently or in the past 40 years?” Iran’s foreign ministry spokesman Abbas Mousavi said shortly before Mr Trump signed his order.

“We... Do not consider them to have any impact,” he said. Amid a flurry of diplomatic activity, the United States, Britain, Saudi Arabia and the United Arab Emirates urged “diplomatic solutions” in the standoff, which is playing out in a region crucial to the global economy’s oil supplies.

French President Emmanuel Macron said he would use a meeting with Mr Trump at the G20 summit in Japan to urge “a constructive solution with the aim of ensuring collective regional security.”

At home, Mr Trump has taken criticism for sending mixed messages to Iran. However, the US president insists he has a clear strategy that breaks firmly with past US policy in the tinderbox Middle East.

In a pair of tweets Monday, Mr Trump said US aims regarding Iran boil down to “No Nuclear Weapons and No Further Sponsoring of Terror.”

On Sunday, Trump told an NBC television interview that if it came to war, Iran would experience “obliteration like you’ve never seen before.”

Iran insists that it does not have a nuclear weapons program. It signed onto an international pact in 2015 meant to ensure that its nuclear industry sticks to civilian uses. Mr Trump, however, pulled the United States out of the deal in 2017, seeking its collapse. But while some in Washington see the White House’s ultimate goal
as regime change in Tehran, Mr Trump says he wants to avoid war and that he’s open to negotiations with Iran’s leaders.

He also insists that Washington’s hands are freer than in the past because its own energy production frees it of dependence on Middle Eastern oil.