US moves closer to shutdown to contain virus outbreak

Governors and mayors were closing restaurants, bars, and schools as the nation sank deeper into chaos over the crisis 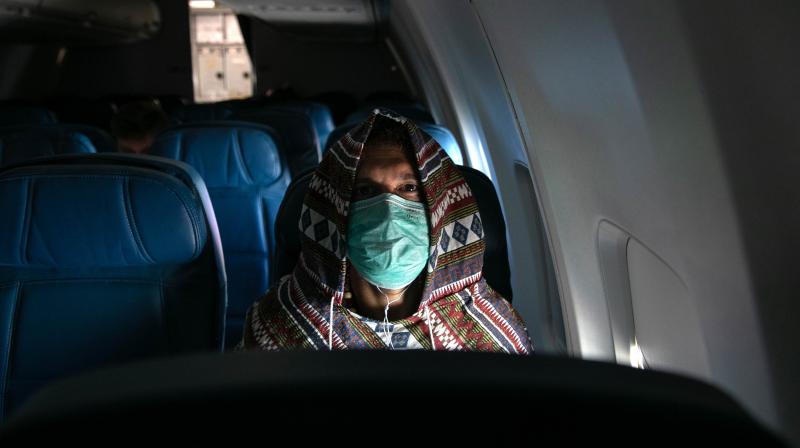 Adam Carver, 38, wears a mask to protect against coronavirus while on a nearly empty Delta flight from Seattle-Tacoma International Airport, JFK. AFP Photo

Chicago: Officials across the country curtailed many elements of American life to fight the coronavirus outbreak on Sunday, with health officials recommending that groups of 50 or more don't get together and a government expert saying a 14-day national shutdown may be needed.

Governors and mayors were closing restaurants, bars, and schools as the nation sank deeper into chaos over the crisis.

Travellers returning home from overseas trips were stuck in line for hours at major airports for screenings, causing them to be crammed into just the kind of crowded spaces that public health officials have been urging people to avoid.

In a sign of the impending economic gloom on the horizon, the Federal Reserve slashed its benchmark interest rate to near zero. President Donald Trump sought to calm a jittery nation by declaring that the government has tremendous control over the situation and urging people to stop the panic buying of grocery staples that has depleted the shelves of stores around the country.

Gun stores started seeing a similar run on weapons and ammunition as the panic intensified.

As Americans struggled to come to terms with how to change their daily habits, the Centers for Disease Control and Prevention issued a dramatic recommendation: Because large events can fuel the spread of the disease, it said gatherings of 50 people or more should be canceled or postponed throughout the country for the next eight weeks.

It added that, at any event, proper precautions should be taken, including making sure people are washing their hands and not getting too close.

But in a sign of the difficulty of striking the right balance, the statement from the CDC also said the recommendation does not apply to the day to day operation of organizations such as schools, institutes of higher learning, or businesses.

Even before the warning, parts of the country already look like a ghost town, and others are about to follow as theme parks closed, Florida beaches shooed away spring breakers, Starbucks said it will accept only drive-thru and takeout orders, and Ohio and Illinois ordered bars and restaurants shuttered.

This is not a joke. No one is immune to this. California's governor asked the state's bars and restaurants to close, but didn't order it. New York City, meanwhile, said eateries could only accept takeout and delivery orders. Mayor Bill de Blasio also ordered nightclubs, movie theaters and other entertainment venues closed.

These places are part of the heart and soul of our city. They are part of what it means to be a New Yorker," he said in a statement Sunday night. But our city is facing an unprecedented threat, and we must respond with a wartime mentality.

His decision came after Dr. Anthony Fauci, the federal government's top infectious disease expert, said he would like to see a 14-day national shutdown imposed to prevent the virus's spread.

I think Americans should be prepared that they are going to have to hunker down significantly more than we as a country are doing, said Fauci, a member of the White House task force on combating the spread of coronavirus.