‘Such a dreamer,' says official about Joseph Yun’s efforts to avert war

State Dept. Asia hand Joseph Yun might be Washington's best diplomatic hope for reducing the risk of a devastating war. 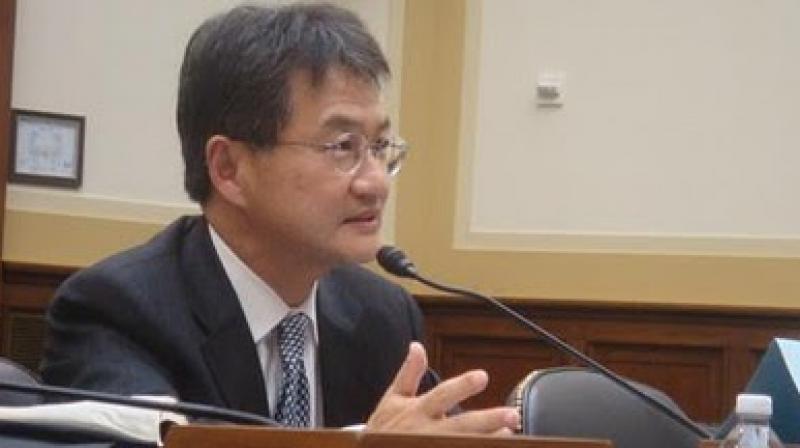 Despite the daunting obstacles, South Korean-born Yun has told colleagues and others he hopes his diplomatic efforts can lower the temperature in a dangerous nuclear stand-off. (Photo: AFP)

Washington/Seoul:  Saddled with the toughest job in American diplomacy, the chief US negotiator with North Korea stands between a US president who insists he doesn't want to talk and an enemy who shows no interest in listening.

While veteran State Department Asia hand Joseph Yun might be Washington's best diplomatic hope for reducing the risk of a devastating war on the Korean peninsula, he serves an administration riven by divisions over how to handle Pyongyang.

On the other side, North Korea's young leader, Kim Jong Un, shows little interest in negotiating either, at least not until he has developed a nuclear-tipped missile capable of hitting the US mainland.

Despite the daunting obstacles, South Korean-born Yun has told colleagues and others he hopes his diplomatic efforts can lower the temperature in a dangerous nuclear stand-off, according to Reuters interviews with more than a dozen current and former US officials and South Korean diplomats.

Most were deeply skeptical about his chances.

"He's such a dreamer," a White House official said, with a note of sarcasm.

"We don't think this is going anywhere," said another US official, although he suggested it was still worthwhile to keep engaging at some level with the North Koreans as long as Yun does not appear to be undermining President Donald Trump's public rejection of direct negotiations.

Trump has told aides that his military threats will drive North Korea to capitulate and rein in its nuclear and missile programs, four White House officials said, a view not shared among most US intelligence agencies.

Yun, however, is quietly pursuing direct diplomacy with North Korean officials at the United Nations and has a mandate to discuss issues beyond the release of US citizens, a senior State Department official said this week. In June, he secured the release of US student Otto Warmbier, who returned to the United States in a coma and died days later.

'Running Out Of Time'

Trump headed to Asia on Friday as a senior aide warned the world is "running out of time" on the North Korea crisis. Behind the scenes, Yun is trying to keep open a fragile line of communication that could be used to prevent any miscalculation by one side or the other from spiraling into military conflict.

US officials have said privately that intercepting a test missile is among options under consideration, though there is disagreement within the administration about the risks.

In the midst of this is Yun, a soft-spoken, 32-year foreign service veteran who took on the job a year ago, near the end of the Obama administration.

He is grappling with Trump's strident rhetoric as well as disagreement among the president's top aides over whether saber-rattling will force Kim to capitulate and what the threshold for any military actions should be, according to several US officials who spoke on condition of anonymity.

Concern about Yun's difficulties has surfaced in Seoul, where he visits regularly and where Trump will travel next week on the second stop of his Asian tour.

"Things are clearly not easy for him," one South Korean diplomat said. "Yun is precisely that person (to talk to North Korea), but Trump is killing the whole process."

Secretary of State Rex Tillerson told reporters on Sept. 30 the United States was probing for a diplomatic opening, only to be slapped down by Trump, who told him via Twitter this was a waste of time.

At the same time, CIA Director Mike Pompeo, who regularly briefs Trump on intelligence matters and is considered one of the most hawkish voices on North Korea in the president's inner circle, has apparently gained stature.

Several officials familiar with those discussions say Pompeo is feeding Trump assessments that US military threats will force Kim to bow to US demands for nuclear disarmament, a position that some US intelligence officers privately contest.

A US official who spoke on condition of anonymity said Yun has become diplomatically "untethered," not fully connected to a core US approach that is emphasizing economic sanctions and the threat of military action rather than diplomacy.

The one tangible achievement of Yun's diplomatic efforts in the past year was winning the release of 22-year-old Warmbier in secret talks with North Korean officials in Oslo and New York. Yun flew to Pyongyang in June to medically evacuate Warmbier.

When Choe Son Hui, head of the North Korean foreign ministry's North America bureau, met Yun in Oslo, she was unaware of how serious Warmbier's condition was, a source in Washington knowledgeable about the matter said.

But once she learned about it she was "shocked" and Yun was summoned urgently to meet a North Korean diplomat in New York, which quickly led to Warmbier's return home, the source said.

Warmbier's death complicated Yun's efforts as it contributed to a chilling of US -North Korean contacts around that time, the State Department official said.

Stumbling In The Dark

Despite Trump's threats of military action against Pyongyang, the State Department official said Yun's view was "the less you engage diplomatically, the more likely you are in the dark."

Even so, Trump's rhetoric has raised questions among allies, and possibly even in North Korea, about how serious, if at all, his administration is about diplomacy and how much of a mandate Yun may have to pursue it.

Trump "personalized" the conflict - deriding Kim as "Little Rocket Man" -  against the advice of his national security and intelligence experts, some of whom warned it could be counterproductive, a senior national security official said.

Another official pointed out, however, that Trump, who in May said he would be honoured to meet Kim, had not hurled any fresh insults at Kim in recent days, raising hopes for an altered approach.

A South Korean official in Seoul said it was necessary for Washington to have someone in contact with North Korea to help spur future negotiations if they are ever to take hold.

But Trump's national security adviser, H.R. McMaster, told Japan's NHK television this week: "What we cannot afford to do is enter into these long, drawn-out negotiations that allow North Korea to use these negotiations as cover for continuing their nuclear and missile programs."

Former US negotiators sympathise with Yun, whose authority to negotiate has been undercut by the tug-of-war between a White House breathing fire and a State Department pushing a peaceful solution.

"Nobody doubted my authority," said Wendy Sherman, one of the lead US negotiators who achieved the 2015 deal under which Iran agreed to restrain its nuclear program in return for relief from economic sanctions. "All of this undermines our ability to do the job."

Robert Gallucci, who was chief US negotiator during the North Korean nuclear crisis of 1994 and has had recent contact with Yun, said the envoy is "realistic about the challenges of negotiating in the current atmosphere, including the tone set by the president, but he believes in the mission even as his approach is guided by realism."