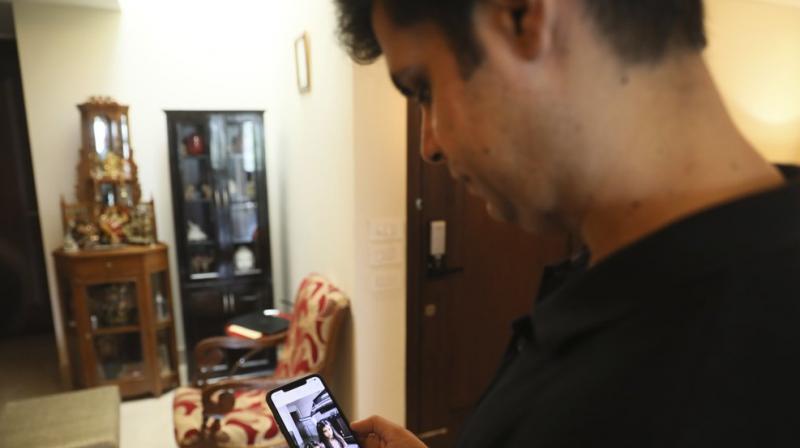 Karan Murgai, an IT management consultant for a multinational based in Dallas, shows on his phone in New Delhi, India, photograph of his daughters, who are in Dallas. (AP)

New Delhi: The March day that his father died, Karan Murgai boarded a plane to India.

The coronavirus was spreading, so Murgai’s wife and their two young children stayed home in Dallas.

Their separation — due to last three weeks — became indefinite after President Donald Trump signed an executive order that suspends applications for H-1B and other high-skilled work visas from abroad.

Trump said the June 22 order would protect jobs amid high U.S. unemployment because of the pandemic.

But Murgai and at least 1,000 others like him, whose American visas are tied to their jobs in the U.S., are now stranded in India — the order’s “collateral damage,” he said.

He contacted the offices of Texas Sen. John Cornyn and Texas Rep. Van Taylor, Indian government officials and the U.S. Consulate in New Delhi. No one could help.

An IT management consultant for a multinational, Murgai handles his father’s affairs in New Delhi during the day and his U.S. job overnight, worrying about his 4-year-old daughter who has lost her appetite and started throwing fits.

India, with the world’s fourth worst-highest virus caseload, is tallying nearly 20,000 new infections each day, but restrictions on travel have begun to ease, with international commercial flights set to resume in July.

“Every day she has this one question to ask me: when am I coming back? I get heartbroken at that point. First, it was July. Now I don’t know. We’re getting hit from all sides,” Murgai said.

The H-1B visa program allows U.S. employers to hire high-skilled foreign workers, mainly for tech jobs. Employers first have to determine there are no American candidates, and then undertake a lengthy sponsorship process that costs as much as $15,000, making the program highly competitive.

Indians account for 75% of the applications for the H-1B program, U.S. government data show. Nearly 85,000 H-1B visas are awarded each year.

Nasscom, a trade association in the Indian information technology industry, called Trump’s order “misguided and harmful to the U.S. economy.”

India’s foreign ministry spokesman Anurag Srivastava said the order would “likely affect movement of Indian skilled professionals,” and that the government was assessing the impact on Indian nationals and industry.

The H1-B program has created a pathway for a generation of skilled Indian and other foreign workers to build lives in the U.S., but the Trump order places years of investment in education, property and communities at risk, said Murgai. He arrived in Dallas with an H-1B visa in 2010 and now owns a house and land there.

“When you’re in a place for a decade, you think you’ve settled down,” he said.

“If new H-1Bs are being stopped, I get it. But then for people who already have jobs, who have already established themselves in their fields and have given the government a reason to keep them in the country, why upend lives like this?”

In surburban Dallas, Sandeep Vudayagiri, a big data analytics engineer, has been home alone since February, when his wife and daughter went to visit family in Hyderabad, India.

Vudayagiri’s wife, Arpana Takkalapally, holds an H-4 visa, given to immediate family of H-1B visa holders. Even though Takkalapally isn’t allowed to work on her visa, without a renewal stamp from a U.S. consulate, she can’t go back.

“It is indirectly punishing the people who are working here,” he said. “How is my 2-year-old an employment threat in the U.S.? Which country does this?” Vudayagiri said.

Takkalapally spends her days in Hyderabad feeding and playing with her daughter, and cooking and cleaning for her parents, bookended by morning and evening calls with her husband.

This is the longest the couple have been separated since they met as graduate students at San Jose State University in 2010.

Takkalapally watched as Indian friends and neighbors flocked to Houston last year for a rally with Indian Prime Minister Narendra Modi and Trump. The leaders extolled the closeness of India-U.S. ties in a stadium filled with 50,000 people.

A similar rally was staged in February in Modi’s home state of Gujarat.

Immigration attorneys in the U.S. said they have been inundated with emails and phone calls seeking help.

“The stress level that this causes on the number of people in the U.S. in legal working status is massive,” said Nell Barker, an attorney in Chicago. “It is causing mental health issues. It is causing productivity issues in a situation where businesses are already struggling to get through these shutdowns and economic downturn.”