The beastly Galaxy Note 10+ is filled to the brim with tech but here are a few features that put it head over shoulders above its rivals. 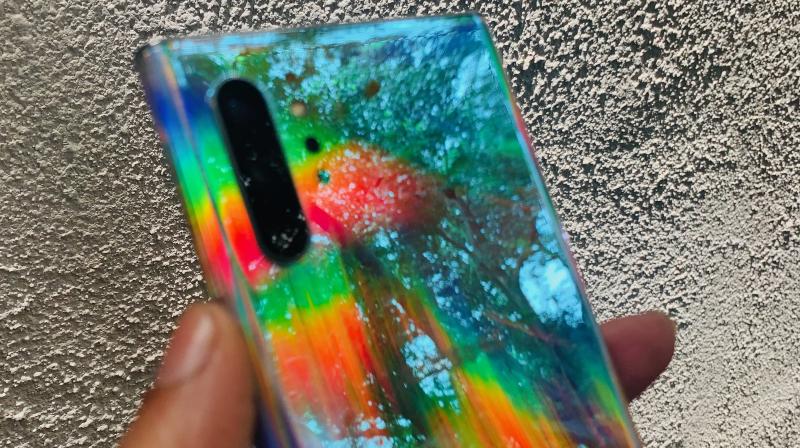 The Aura Glow variant is hands-down the best looking smartphone in the world.

At a recent event in Bengaluru, Samsung took to the stage at its world’s largest store, the Samsung Opera House and showed off the Galaxy Note 10 series of devices. This handset is absolutely packed to the brim with a tone of features that will make any tech enthusiast swoon. And if you happen to be an Apple fan, this is one handset you should divert your eyes away from as it has the potential to convert you over to the ‘green’ side.

The Galaxy Note 10 and Note 10+ have recently gone on sale throughout the globe and with India being a prime market for the South Korean giant; Samsung has launched the handset in multiple variants for every type of consumer who is looking forward to buying a premium device. In this listicle, we break down the reasons why the Samsung Galaxy Note 10+ is the handset you need to own and own it now.

S Pen: Last year, Samsung introduced the S Pen with some great features and it did manage to convert a lot of consumers as the Note 9 was easily one of the best smartphones of the year. This time around, Samsung has doubled-down on the technology with its S Pen and have thrown in features such as Handwriting to Text, AR Doodle and more. With the Uni-body S Pen, users can jot down notes, instantly convert their handwriting to digital text in Samsung Notes, and export it to a variety of different formats, including Microsoft Word. With AR Doodle, use the S Pen to personalize photos with dynamic drawings, effects, and animations that track to the image.

Interestingly, this is just the tip of the iceberg as the S Pen has now been evolved as it features Air Actions that allow you to control certain aspects of the device using gestures with the S Pen. Also, with the S Pen and the Video Editor app, stead of having to tap to select or edit a clip, users can choose the precise moment they want to trim. Samsung’s S Pen bragging rights don’t end there, it also has an incredibly long battery life and by replacing it in the cradle, the S Pen’s battery gets topped up again. 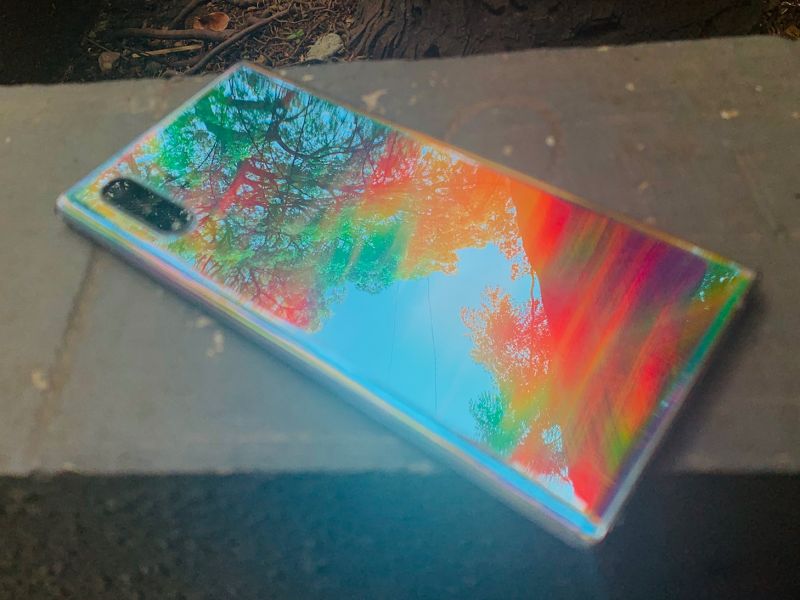 AR Doodle and 3D Scanner: While speaking about the S Pen, we did mention AR Doodle, this feature requires an entire section on its own as it is a power-packed feature that paves the way for how we can seamlessly use augmented reality in our day-to-day lives. The Samsung flagship utilizes bleeding-edge AR and 3D capabilities into the camera. Along with an Ultra-Wide camera, it opens up an entirely new medium for creators. AR Doodle and 3D Scanner, which is another great feature go hand-in-hand. The Galaxy Note10+’s DepthVision camera can take a scan of an object, and instantly turn it into a movable 3D rendering. And as mentioned earlier, by using the S Pen, you can personalise photos with dynamic drawings, annotations, effects and more.

Display: The Galaxy Note 10+ comes with a jaw-dropping display and has to be experienced to be believed. It boasts an HDR10+ certification and Dynamic Tone Mapping, photos and videos are brighter than previous Note devices and feature a stunning, wide colour range. With all this in tow, it is no surprise that the handset has received the coveted A+ grade from DisplayMate. Both the 6.3-inch, Full HD+ (2280×1080) Galaxy Note10 and the 6.8-inch, Quad HD+ (3040×1440) Galaxy Note10+ boast Samsung’s all-new Dynamic AMOLED Infinity-O Display. The smartphones’ immersive screens include a single small, centred camera cut-out at the top that allows them to offer users an exceptionally high screen-to-window ratio. 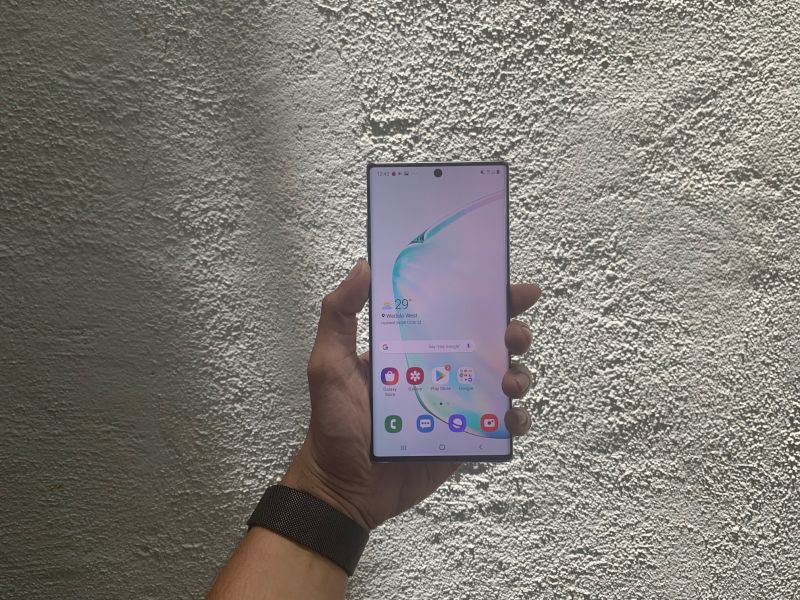 Cameras: The cameras used on the Galaxy Note 10 lineup are arguably the best in the industry. The 5G variant of the Galaxy Note 10+ has received the number one ranking on the DxOMark both front-facing and rear-facing cameras, as well as the top score for the video. Samsung has packed the handsets with state-of-the-art tools to capture stunning video and photos at users’ fingertips and have been built with content creators and everyday users in mind. The Galaxy Note 10+ takes videography and photography to the next level, allowing the user’s social media channels, stories and posts to make an even bigger impact. And speaking about its DxOMark score, the Note 10+ selfie camera scored the first-place distinction with a score of 99 while the rear cameras received the first place as well with an overall mobile score of 113.

Design: With every Galaxy smartphone, Samsung ensures it is finished with premium materials. However, with the Note 10, Samsung has pushed the boundaries of what a smartphone design can be. While the handset comes in a range of colours, the newly launched Aura Glow has caught our attention as it is unlike anything the world has ever seen before. This rainbow-like colourway is available on both the Note 10 and Note 10+ and it really does catch the eye especially in comparison with the other colours that most other handsets come with. 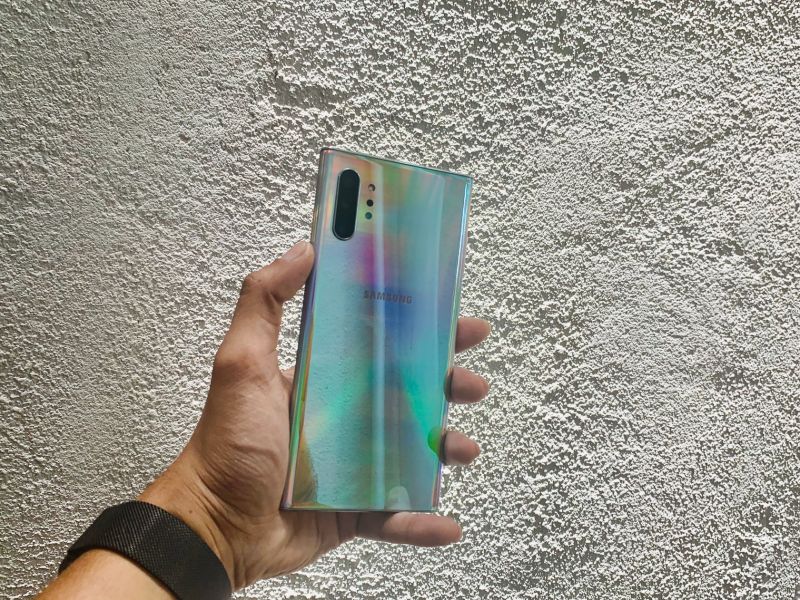 Lastly, as a bonus, we have to include battery life here. The Note 10+ comes with a massive 4300mAH battery and those who purchase it can take advantage of super-fast 45W fast charging that can go from 0 to 100% in just an hour. This is pretty impressive and once again Samsung is showing that they don’t need to compromise on a single feature when it comes to its flagships; all while pricing it just about right.