Apple has released iOS 13.2.2 which is another surprise update that has some vital fixes.

This year, Apple has released update after update of its iOS 13 operating system for the iPhone as each quick-fire release has been plagued but bugs. Some of these releases have some big features like Deep Fusion with iOS 13.2; however, there are mini-updates that have been specific with several bug fixes.

Interestingly, there was a minor update that had a rather small audience, which was iOS 13.2.1 that was released last week and it did not appear on most iOS devices except for HomePod owners. So, if you aren’t a HomePod owner, the recent release appears to have been a jump from iOS 13.2 to iOS 13.2.2 which gets a wider reach. For those who have iPhones, here is what Apple released with iOS 13.2.2 and how you can get it.

This update is now available to download as an over-the-air (OTA) update for all compatible iPhones and iPadOS 13.2.2 for supported iPads. All you need to do is head on over to the Settings app, select General, then Software Update. Once you select this ‘Download and Install” all you need to do is allow the iPhone to do its job and before you know it, your handset/tablet will be updated to the latest version. 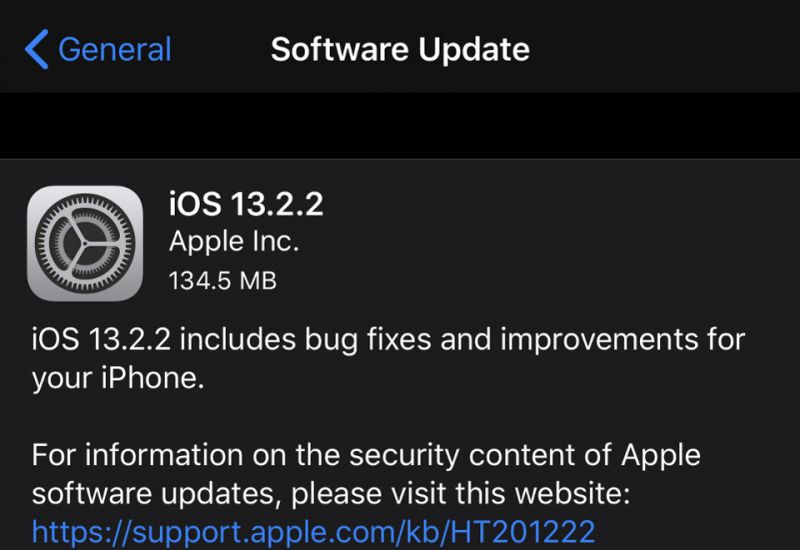 What does the update contain?

This update contains a host of bug fixes and Apple states that it also includes improvements for your iPhone.

Apps in background quitting unexpectedly: One of the biggest issues with iOS 13.2 were that apps running in the background would quit even though you didn’t want them to. This was rather infuriating and several posts highlighted users experiencing these issues. Now, with iOS 13.2.2, Apple aims to fix this problem.

Loss of cellular signal: This was another major issue which was plaguing iOS owners. iPhone owners have reportedly lost cellular connection after a call and rectifying this was a big emphasis in this update. Also, mobile data not available was also a big issue and this update appears to rectify it.

Unreadable email replies: Reports started surfacing that said that some replies of encrypted email messages between Exchange accounts were turning up unreadable. This update aims to fix this issue as well.

Miscellaneous Issues: The other two areas are quite specific. Apple states that with the update they will “address an issue where using the Kerberos single sign-on service in Safari may present an authentication prompt”. The other problem iOS 13.2.2 resolves is “an issue where charging may be interrupted on YubiKey Lightning-powered accessories”.

So, with this issue, there are mainly fixes and no additional features. Hopefully, no new bugs appear with this update.