Over 408,000 websites are blocked in Turkey, and it also leads the world in Twitter removal requests, with 6,000 demands in 2019 first half. 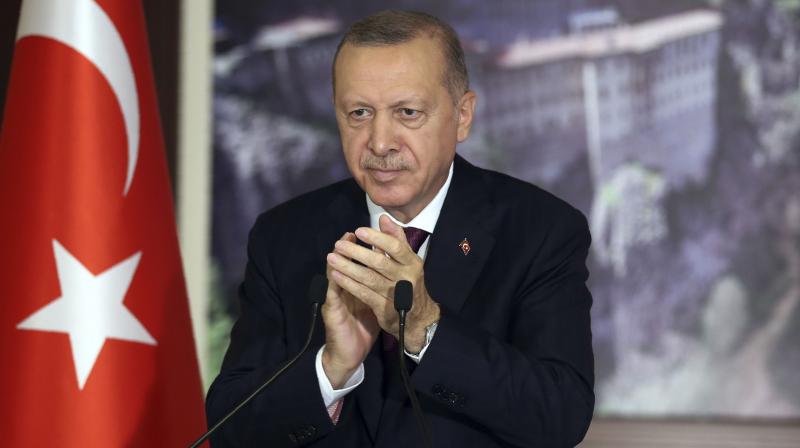 Turkey President Recep Tayyip Erdogan is not a fan of social media despite a large following on various platforms. According to the new law, a social media company must designate a local representative, who will be tasked with responding to individual requests to take down content violating privacy and personal rights within 48 hours or to provide grounds for rejection. The company would be held liable for damages if the content is not removed or blocked within 24 hours. (Photo | AP)

The law requires major social media companies such as Facebook and Twitter to keep representative offices in Turkey to deal with complaints against content on their platforms.

The government says the legislation was needed to combat cybercrime and protect users. Speaking in parliament Wednesday morning, ruling party lawmaker Rumeysa Kadak said it would be used to remove posts that contain cyberbullying and insults against women.

Opposition lawmakers said the law would further limit freedom of expression in a country where the media is already under tight government control and dozens of journalists are in jail. They called the bill the “censorship law.”

The representative will be tasked with responding to individual requests to take down content violating privacy and personal rights within 48 hours or to provide grounds for rejection. The company would be held liable for damages if the content is not removed or blocked within 24 hours.

Hundreds of people have been investigated and some arrested over social media posts on the COVID-19 pandemic, opposition to Turkish military offensives abroad or insulting President Recep Tayyip Erdogan and other officials.

Cyber-rights activist and academic Yaman Akdeniz tweeted: “A new and dark period is starting in Turkey” with the new law. He argued the law would be used to remove content critical of the government rather than to protect users.

Rights groups and the United Nations Office of the High Commissioner for Human Rights came out against the bill Tuesday ahead of the vote, with Amnesty International calling it “draconian.”

“If passed, these amendments would significantly increase the government’s powers to censor online content and prosecute social media users. This is a clear violation of the right to freedom of expression online and contravenes international human rights law and standards,” Amnesty International’s Andrew Gardner said.

Rights activists also argue that increased control of social media will also limit Turkish access to independent or critical information in a country where the news media is in the hands of government-friendly businessmen or controlled by the state.

Turkey leads the world in removal requests to Twitter, with more than 6,000 demands in the first half of 2019.

More than 408,000 websites are blocked in Turkey, according to The Freedom of Expression Association.

Online encyclopedia Wikipedia was blocked for nearly three years before Turkey’s top court ruled that the ban violated the right to freedom of expression.

54 million people in the country of 83 million are active social media users.

A July survey by polling company Metropoll showed 49.6% of respondents did not support a law that could limit, shut down or fine social media companies over content. Some 40.8% said they would support it.

Human rights groups and the opposition are worried over what they call the erosion of freedom of expression in Turkey, with thousands of people subject to criminal proceedings for “insulting” President Erdogan on social media.

Human Rights Watch expressed concerns that the law would enable the government to control social media, to get content removed at will and to arbitrarily target individual users.

“Social media is a lifeline for many people who use it to access news, so this law signals a new dark era of online censorship,” said Tom Porteous, deputy program director at Human Rights Watch in a statement before the legislation passed.

The legislation has aroused deep concerns for many Internet users in Turkey who mobilised online in recent weeks using the hashtag “don’t touch my social media”.

The law passed after 16 hours of tense deliberations in parliament, where Erdogan’s ruling party and its nationalist ally hold the majority of seats. It will be published in the Official Gazette after Erdogan approves it and will come into effect on October 1.

“There is no obstacle to social media users freely expressing their opinion,” he told CNN-Turk television on Tuesday.

“Here is the rule: whatever is a crime in real world is also a crime in cyber world ... there must be a limit to criticism.”

Erdogan vowed to tighten government control over social media earlier this month after he said “dark-hearted” users insulted Finance Minister Berat Albayrak and his wife Esra, the president’s daughter, following the birth of their fourth child.

And last month, the Turkish leader met with a spate of negative comments during a video-conference with young people.

The Turkish presidency then turned off comments but there were 388,000 clicks on the “thumbs down” button, compared with 114,000 on the “thumbs up” button.

Erdogan is not a fan of social media despite a large following on different platforms, including Twitter.

He once compared the media platforms to a “murderer’s knife” and previously promised to “eradicate” Twitter.

His government previously blocked Twitter and YouTube in 2014 after audio recordings were posted implicating the president, then prime minister, and his inner circle in an alleged corruption scandal.

Erdogan’s aversion of social media also dates back to anti-government protests in 2013, which were often mobilised by Twitter and Facebook posts.