Technology   In Other news  26 Mar 2020  Follow the spread of the coronavirus by country, state and district on these tracker websites
Technology, In Other news

Follow the spread of the coronavirus by country, state and district on these tracker websites

They feature interactive maps with figures corresponding to locations updated often — twice daily, in real time, and even every two minutes 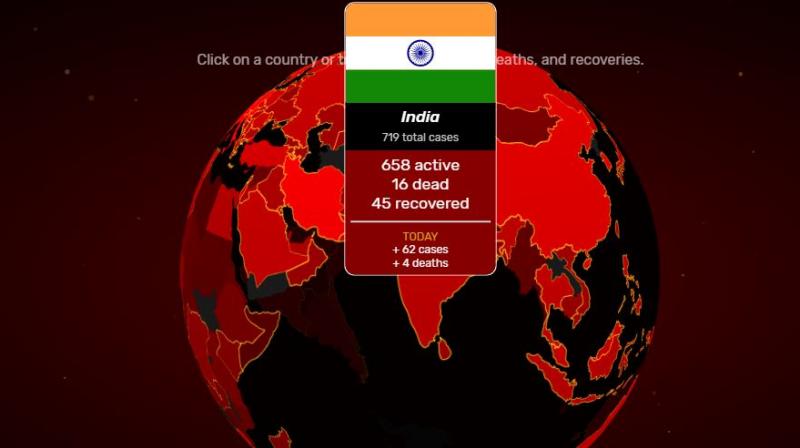 The covidvisualizer.com website lets you click on countries on a rotating globe, to display figures listed below that nation's flag.

Chennai: As the number of confirmed cases of COVID-19 infection in India keep rising, websites set up especially for the purpose are tracking info and tracing the spread of the contagion on maps of districts, states and the world. Let’s take a look at some of the interactive trackers.

Covindia.netlify.com gives you one of the most detailed visual representations among existing coronavirus trackers. It puts the info on an interactive district-wise map of India. The total number of cases and the number of people who died of coronavirus show up on the screen when you hover over the district.

The COVID-19 tracker was put together by a handful of students and professors of a Hyderabad-based engineering college, Mahindra Ecole Centrale, using trusted sources such as the MoHFW, Kerala’s Directorate of Health Services and newspaper reports.

The tracker depends on artificial intelligence in the form of “automatic crawlers”, which trawl through news articles online to identify coronavirus key words and alert student volunteers. The articles are then cross-checked by the students and and the data is entered into the tracker after the sources are verified.

The sources are also listed with links on the website.

Covindia.netlify.com also provides graphs tracing the curve of the total number of cases and new cases being reported daily, as well as a bar graph comparison of the incidence in the states.

The one data missing from the site is the number of people who have recovered. But it has a useful feature — a timelapse map of the contagion’s spread, currently showing districts in white turning green or orange (lower to higher numbers) from March 16 to March 24.

A project run by more than 250 volunteers, as the website says, this India specific tracker lists the number of infections by state and not by district. The states are colour coded according to the number of cases identified there.

This site too features a graph. It shows that in 17 days since March 2, the infection spread to 150 people, after which the progression has been much faster – the numbers hit 300 cases in the next 3 days, 450 cases in just another two days and 600 cases in the following two days.

The website also lists authoritative coronavirus resources, apart from a static world map on the side of which the total number of infections, deaths and recoveries as well as the number of infected countries is displayed.

Where Covindia.netlify.com and covidindia.org put the user at ease with their use of colours, covidvisualizer.com immediately alarms the user. It features a black globe rotating in a deep red background on which yellow and grey dots whizz about appearing to pass through countries mapped in shades of red. Altogether a picture of gloom, especially as the dots invoke an image of viruses hanging in the air like dust particles.

But once you look past the visuals, you would begin to appreciate the tracker. Click on any country and you get all the information neatly presented along with the country’s national flag. This includes the total number of cases, patients undergoing treatment (active cases), fatalities and, reassuringly, how many people recovered.

A small tab on the bottom of the single page website labelled ‘More Information’ says the tracker was developed by two students of Carnegie Mellon University, Navid Mamoon and Gabriel Rasskin, and that it uses data from real-time updates of another popular tracker Worldometer. New data is added to the tracker every two minutes.

Talking about trackers, the most cited among them is the one hosted by Johns Hopkins University at coronavirus.jhu.edu/map.html. It highlights cases on a black and grey world map, with red circles of varying size denoting the number of cases in each country, or in the case of the US and China, each state or province.

Click on a circle and you get the details of the cases in that area – confirmed, deaths, recovered, and active.

These details are also listed by country on tables flanking the world map.

The Johns Hopkins tracker uses data from the largest number of sources, including the WHO, CDC, Worldometers.info, and state and national government health departments, as well as local media reports. This is the reason why, apart from the obvious goodwill of the brand, it is most widely cited.