Technology   Gadgets  17 Apr 2019  Beat the heat: How to make your own air cooler at home
Technology, Gadgets

Beat the heat: How to make your own air cooler at home

Using recycled stuff from around your house can actually reduce the temperature in your house. 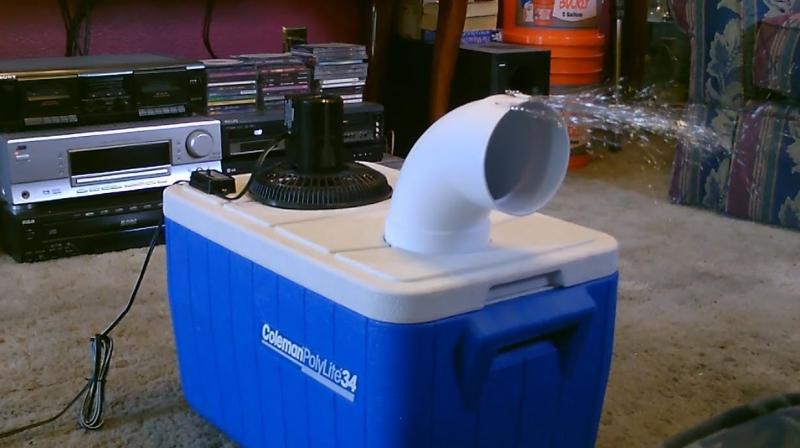 Can’t afford an air conditioner? Not even an air cooler? No fret — here are a few ways to make your own cooler at home.

With the summer already here, the mercury is expected to rise higher by the day and will soon reach its unbearable peak. While many people can afford to spend on power bills and install air conditioners at home, there are many who cannot afford even air coolers.

Air conditioners are pretty expensive themselves and adding to them their power bills makes it out of reach for most common man. So opting for an air cooler is probably one solution which not only is cheaper as an appliance, but also uses lower power than conventional air conditioners.

In this article, we bring you a few videos that show you how you can personally make an air cooler at home. The process may need a few building and electrical skills, but the best part is that they can be built according to the size you require and from parts easily available in the market or even your own home. Some videos even show you how you can recycle old stuff around your home to create some good air coolers yourself.

In this video from down south, Vimal Chintapatla shows you how you can purchase some off-the-self DIY parts to make your own air cooler for as little as Rs 1,500. All you need to so is assemble the parts and you are good to go.

This one ahead shows you how you can go ahead and design your own air cooler using raw material. You would need a plethora of tools in order to get this on the road. While there is a lot of effort needed here, the satisfaction thereafter is priceless.

While both the DIY coolers shown above require water as the basic coolant, the video below shows you how you can build a near-air conditioner and needs no coolant such as water or compressors. It uses a peltier chip can cool with just electricity. The process here is known as thermoelectric which uses the peltier effect to create a heat flux between the junction of two completely different materials. It s a solid-state active heat pump which transfers heat from one side of the device to the other, with consumption of electrical energy. All it needs is electricity and some good fans. The building process is a bit tedious. The parts are easily available too. And the cooling is pretty good. However, this type of air cooler produces a lot of heat from the rear end and needs to be mounted on a window like conventional window ACs. This cooler is only good enough for very small or tiny spaces as the electricity consumption is not as efficient as practical air conditioners, but good enough for places where air conditioners cannot be installed or available for such small rooms.

Taking a byte from the video above, this guy below has converted the same concept to build a split air cooler or air conditioner using peltier chips. To help cool the peltier chips, he uses a water cooling bypass that releases the heat outside the house. Pretty cool, but ain’t that efficient either.

Below are two more videos that show you how you can build a super cheap air cooler by recycling old stuff lying around your house. By using an old plastic container, an old washing machine motor, old fan blade, a portable DC water pump and a few other spares, you too can build a good air cooler. While the cooler does not look as great, it is a nice DIY fun project for everyone to try.

And lastly, here are an even cheaper methods on how to make a SIY air cooler at home. Check it out these two videos below.

If you don’t want to make your own air cooler or buy one, for whatever reasons, here is a video that shows you 12 tips on how you can beat the summer heat without an air conditioner or air cooler.