A pilot by profession, race-car driver Sneha Sharma is hoping to represent India at the international circuit. 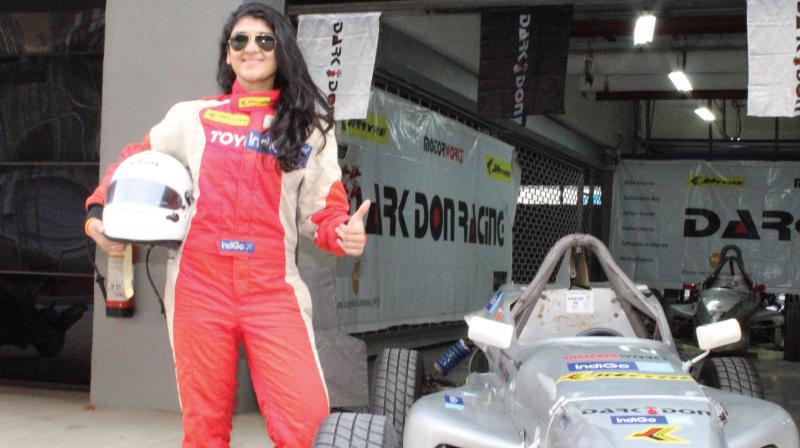 Racing track queen from the city, Sneha Sharma has a hectic routine and she isn’t complaining. After all it is her choice to compete with men on the track and fly with her dreams. Regarded as the fastest woman in India, her love for machines is evident.

Her aim is to outpace men and win national championship to represent India in the international circuit. She also eyes a spot at Formula BMW Racing. For now she is preparing for the JK Tyre Formula 4 and will undergo pre testing in June.

“I am excited about the season. FIA (Automobile Federation) head Jean Todt gave me ‘Outstanding Women’s driver award’ in Federation of Motor Sports Clubs of India (FMSCI) awards (in February). JK Tyre also rewarded me for my achievements, which motivates me more. I will also give motivational lecture at Ted Talk (world series) on June 4 in Gujarat,” beams Sneha.

The 26-year-old Formula 4 racer from Andheri, who is also a professional pilot with Indigo Airlines, has to find ways to make time for the gruelling sport she has chosen and the profession she opted for. She participates approximately 24 competitive car races a year and also has to operate four flights a day.

But with her helmet on, Sneha gets ready to compete with men in what is called as men’s sport. But it doesn’t come easy. She has to do extra hard yards to match her male counterparts. “I have to put in extra effort and hours in the gym. But once I get into the car and helmet is on, I am nothing else but the racing driver,” said Sneha, who doesn’t mind coping with the demands of the airline industry either.

Her day starts in the wee hours of the morning depending on her day schedule, which keeps varying at times. She has no fitness advisor or trainer and she browses through the Internet for regular fitness tips. “I was fat earlier, and had to lose 30 kgs of weight over a period of one-and-a-half years to be fit and withstand the demands of car racing. I have to sit for longer times in the flight so I find ways to stay fit. Yoga helps me to detoxify my body at times,” she added.

“My fitness programme varies. I have to work hard on my upper body to make it sustain the demands of racing. I include cardio in my exercise routine. Stamina building is important for me, so I do running. I also work on flexibility, as quick reflexes are required. I also do hydraulics, power yoga, and swimming and go for a walk to maintain calories when I get the time.”

Sneha  also has to defy injury woes to remain motivated to go ahead and reach closer to her dreams. “During a race in Delhi, one of the drivers lost control near one corner and hit my car. I had ligament tears in my upper body but I didn’t stop work. Instead I did swimming and did quick rehab. There have been many such instances before, I have had rib cracks also but challenges how tough they may be don’t deter my resolve. I have only one fear while racing and it is ‘Did Not Finish’. It is the worst fear I have, I am not scared of injuries,” she said.

Brush with Racing
Sneha, who idolises former Brazilian Formula One driver, Ayrton Senna, is racing since 16. As a child, she would sail with her father, who worked in the merchant navy, during vacations. She started riding bicycles and it wasn’t long before she got into motor cars and it turned driving into seriousness when she visited and participated at the local karting tracks.

“My performances in the local Go-karting races got me noticed and I was selected to be a part of the national karting team. Soon I was racing for Championships like the JK Tyres, MRF National Go-Karting Championships, Rayo Racing National championships and many others. First people didn’t accept me as a driver, I faced some challenges but I was determined to do it,” said Sneha, who also indulges in charity work.

Her daily schedule is hectic but she ensures her day starts with physical activity and ends with it. “I have to train hard and I miss no opportunity to indulge in fitness activity whenever I get time. I manage (official) leaves and my employers Indigo airlines has also been cooperative. I also study a lot as I want to become a good pilot,” she said.